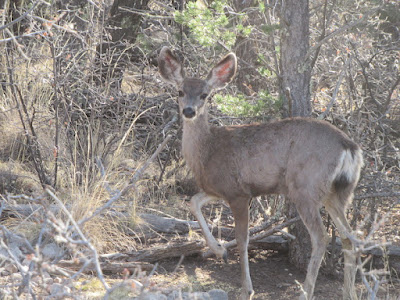 I took this photo in June. Have not seen any deer or turkeys this month. Guano. 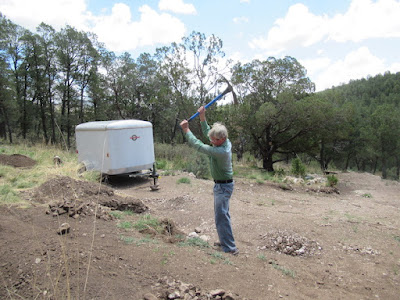 I’m digging down this slope so the Ford does not have to work so hard pulling the Nash up. I only use this slope the day I get back to my property in March. The rig needs to straighten out so I can back onto my Spring spot. 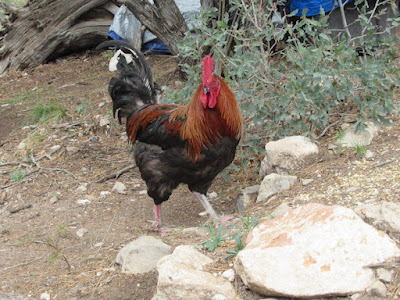 Early in the month, someone acquired a rooster. The bird was off in the distance to the east, on another road so his morning wake up call was kinda nice (and 45 minutes after I get up). I’m just guessing here, but if it is the couple I’m thinking of, we have a mutual dislike. The cawing had been coming from their direction and approximate distance. One morning Rooster was on my property. Cann’t see a rooster walking so far through the woods, and out of all compass bearings, straight to me? Midnight drop?

The rooster hung around for most of the day. Next morning when we heard him, he was right under the galley window. Scared the shi*t out of us. M&M stood up with ears alert and Mesa stalked to the back right window and looked down. Probably thinking, What the ….? Rooster stayed around for the whole day. If the owner wanted the rooster back, all he had to do was drive to the sound. 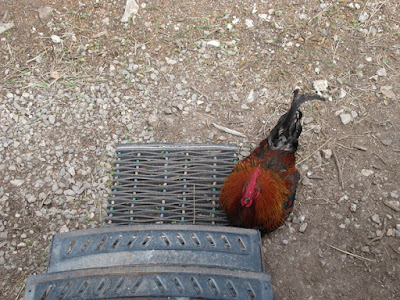 A favorite spot to hang out. Other spots are under the Nash and pickup. Rooster seems to like our spot and hasn’t left. From time to time he follows me around. Once I walked up from working down the hill and there he was, lying on the top step. If I ever forget to close the screen door, I’m sure he would walk right in. ‘This my new coop?’

It’s kinda different having him around. Don’t know how this will turn out. There are a number of people here who have chickens, maybe I’ll ask a couple if they want a rooster, or I’ll post a notice on the kiosk. I need to check youtube for a way to catch a free roaming rooster, without getting shredded. I leave the first of November. He’ll would not survive the winter on his own. Don’t want to see that. Any ideas?

For cat people.
Bartender: What will you have?
Cat: Shot of rum.
Bartender pours it.
The cat slowly pushes it off the bar.
Cat: Another.

I saw the Montezuma quail again. Really have to start pocketing my camera. I was spreading scratch grain and the male kept eating some that was farther out until I was within 12’. The female stayed 20-25’ back. Never been so close to them, and I was not trying to get close. Strange. The male was making sounds that were pretty cool. Not singing and didn’t quite sound like cooing. Will have to find out about this.

A few last things about cicadas, really. I looked into their life cycle. Worth checking out. Eggs in a slit cut in twig bark? Okay, I decided to move a few large rocks I had dug up two years ago. When I picked one up, I saw the back of a cicada nymph. The rock formed the top of his tunnel, leaving a thin line of his back exposed. I watched him for a bit since he appeared alive, even though he wasn’t moving, his back was shiny. Then I saw movement. He was scooping dirt backwards with his legs and then scooted forward. He kept up the scoop and scoot until he was out of sight. Leaving a good deal of dirt behind him. I enjoy simple things.
Nymphs have an instinct to dig up when it’s time to come to the surface to moult. What if there is a rock in the way? The others dug up and shed their skins two months ago. This one hit a rock, expanded his tunnel and stayed there. Now that he moved along, with no rock above him, will he dig up?

Some chickens were lined up along a road. They were contemplating why anyone would cross the road.


‘Give 5% of your time to keeping well. You won’t have to give 100% getting over being sick.’
Dr. George W. Calver
Sure wish this was common sense to the many.