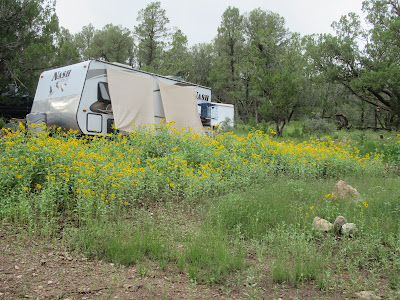 Would have preferred wild grasses. 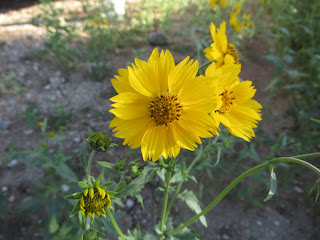 Does anyone know what this plant is?

It used to be nice and quiet here with a good deal of wildlife. Last spring, a couple, two lots over, had their property cleared and had a house built. Guano.
Turkey hens and does brought their little ones through, as you’ve seen in previous summer photos and I got to watch them grow over the months. Not this year. Their dog is constantly barking, followed by the wife screaming for him to shut up. After 3 months of this (and aspirin), one day I called out, ‘ENOUGH!’ I know, I know, I should have walked over and tried to talk with the lady and her husband. From time to time, I regress. Pet ownership comes with responsibility. Either train the dog and/or get a ‘bark collar. I try to keep the noise I make on my property. But, from time to time I have to use the chainsaw. 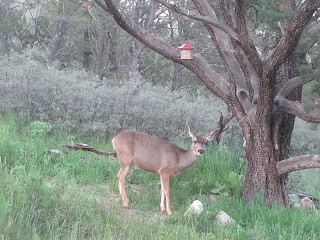 It’s been quieter but still no chicks and fawns. What mother would bring her little ones near all that noise. A couple weeks later the couple took their travel trailer down to El Paso for a month. 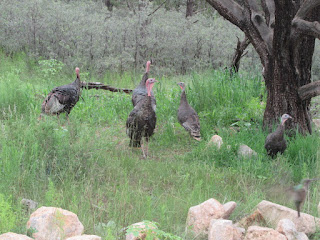 A week and a half later, I looked up and saw some turkeys. The two on the right are this year’s birds and are were well on their way to being full grown. I was bummed that I missed seeing them grow but pleased they were coming around for the scratch grain and water. Note the hummingbird that flew into the shot. 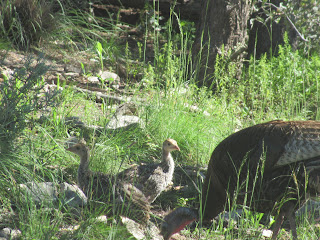 A few days later, a hen came by with younger chicks. Yes, there are gods.

Was it Voltaire who maintained that there was nothing less common than common sense? Smart man. After the last few years, one has to agree.
Sometimes while talking with someone, I’ll say, ‘such and such, is just common sense, but then again, how common is that now a days?’

June was hot here but July and August were cooler than the last four summers. Much greener, more grass. Daily afternoon rain started around the first of July. Since I have to truck in my water, I harvested water off the Nash roof so I could wash and wax the Ford 250. I wash the truck occasionally on my town runs, but when I get back to my property it’s dirty from the gravel and dirt roads. And this year, large mud puddles. 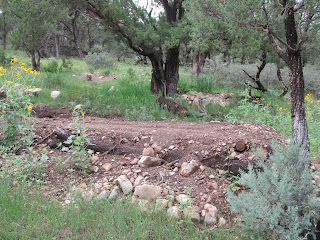 I made a much better spot to park the Nash for the spring months. This is where just about all of the 10’ logs I cut and dragged ended up. Plenty of good exercise. Hope to never use this spot. 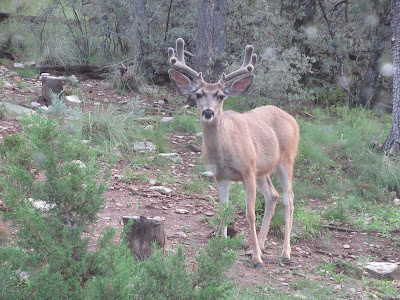 Still growing out but I have not seen this buck in a couple months.

Still plan to roll out of here on Tuesday, September 7. I do not want to make a month’s reservation at a local park in Silver City without first checking it out. Hopefully, I’ll find a spot. Hard wall camping off-the-grid won’t work for all that I plan to do in the area.

MdmLibrarian said…
According to my plant identifier app, your flower is a Golden Crownbeard (related to the sunflower). It is also called a butter daisy.

From what I read in your blog, you should be in New Mexico right now. Hope your search is going well!

simplelivingandsimpletravel.com said…
Thanks, formally-known-as-Pinball. Yep, I'm in Silver. No luck so far.
September 17, 2021 at 3:28 PM

MFH said…
You might check with Jean-Robert Beffort (pronounced Bay-fore), owner the gallery A-Space in Silver. He's been there for decades and might know someone who knows someone with the perfect land for sale.

Please give him my regards.