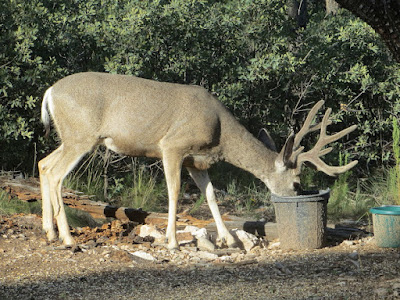 After it rains and the buckets fill from under the gutter spouts, I move them out to where the corn and scratch grain is. This is a common scene. 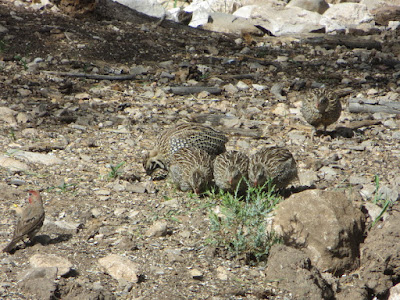 I might have finally taken a decent shot of my Montezumas.

When the lady gets a little upset, sometimes a simple, ‘Calm down,’ in a low, soothing voice—is all it takes to get her A LOT upset.

Early in the summer, hummingbirds were sippin’ the feeder dry in a day. I did not want this to be a daily chore so I started taking the feeder down around 8:00 in the morning and hung it back up around 5:00. I figured the hummers should learn where flowers and other feeders are located in the area in case mine wasn’t up. The survival thing.
If I’m late hanging the feeder back up and I’m outside, I’ve had a hummer buzz me. As if to say, Hey, slacker, where’s my sugar water? If I’m inside, sometimes one will hover outside the back window for a few seconds looking in at me. I always respond quickly.

I’ve been having trouble with one hummingbird for the last month. If there are only two or three hummers around the feeder, the little pisser chases them away. I think it is a male Rufous. I was thinking of standing out there with a fly swatter. Then I thought maybe I should add a 20 gauge shotgun to my town-run list. Wish he would re-locate. 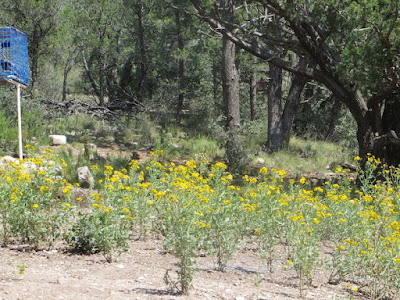 Not the green I was hoping for back in April. Don’t know where the seeds for these plants came from. There were none of these plants in the area since I’ve been here.
Have not yet been able to get any grass seed to sprout. I depend on rain for watering, but we sure have not been getting much this summer. Have not had monsoon rains here since 2017. 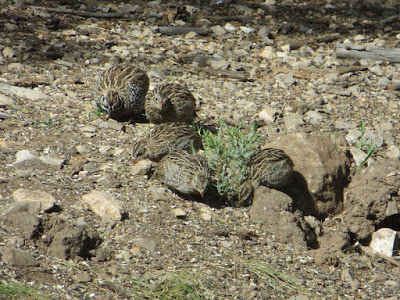 Two campers staying in a National Park were talking with the ranger who was in charge of maintaining order in the campsites. He showed them how to operate the new garbage cans. The complex models had a rotating upper section and a special door designed to keep out hungry bears. One camper asked the ranger whether the fortified cans were working as intended. “Not really. We’re finding considerable overlap in the intelligence of the smartest bears and the dumbest campers.”

Mesa came in one afternoon with a mess of burrs. We deal with goat’s head every winter but these were nastier. He has no trouble picking off goat’s head with his teeth but not these. I took over 20 burrs off him. There were three tightly clustered on his cheek near his eye. Luckily I had a wide pair of tweezers. No way could I have gotten them off with my fingers. Some were buried down in his fur on his chest. Others were not a problem for me but there is no way Mesa could have gotten them off. How do wildlife cope with all that they have to deal with out there, with no human to help them out? M&M have come in with burrs many times but nothin’ like this. Mesa is not all that affectionate but he was on my lap all evening while I was reading. He sure seemed grateful. It felt good that I could help him with something he could not do for himself.

I’ve been looking at pages in my NM DeLorme Atlas for areas to check out for property. Nothing is jumping out. I have a number of requirements that I want as to a location and distance from a town and mountains, what I need in a town, as well as for the land itself. Maybe I should have held on to the ten acres I had in Lake Placid, NY, bordering on the Van Hoevenberg Recreation Area.


Life is how you spend your time.

Larry said…
Love the ranger's comment on bear-proof trash cans. We just traveled through northern Montana and spent several minutes trying to figure out the latch. We did succeed but now wonder how quickly the bears would have done it.
September 28, 2019 at 7:56 PM

simplelivingandsimpletravel.com said…
That's funny, Larry, thanks for the chuckle.
October 2, 2019 at 9:32 AM