doe ears, gettin’ hot, bozos and words from the past 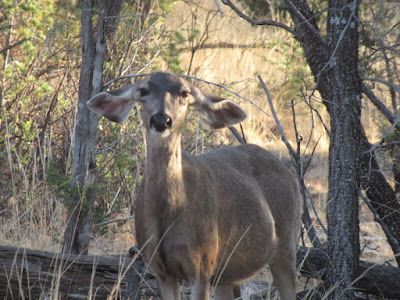 I have not seen a deer with ears like this. When she flaps her ears for the flys, they only move forward and back. Her small group includes a young buck. I’ve only seen her twice but she might come through in the dark. I’ve started putting out cracked corn just before I turn in. It’s always gone when I look outside in the morning. Deer, turkeys, both, or something else? 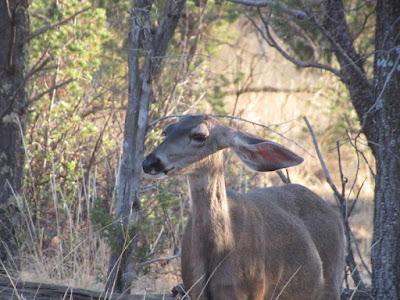 I watched this girl the whole time she was here. Her ears never moved into a common position. Maybe this side shot shows why. 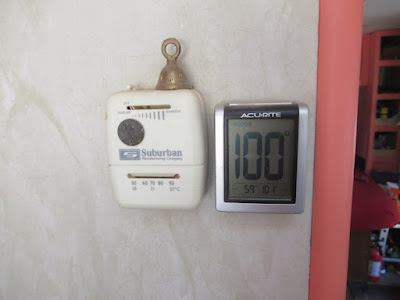 This a new high for inside the Nash. Don’t quite wish for the 34º inside temp, though.

Do any of you remember Fireside Theater’s (might be firesign theatre), ‘ I Think We’re All Bozos on this Bus?’ How bout this part, ‘ Before the Beginning?’ But one really needs to listen to the audio presentation, just reading the words doesn’t cut it. It’s best to listen to this CD with some grass.

“Before the beginning, there was this turtle. And the turtle was alone. And he looked around. And he saw his neighbor, who was his mother. And he laid down on top of his neighbor and behold she bore him in tears, an oak tree. Which grew all day, and then fell over, like a bridge. And low, under the bridge, there came a catfish, and he was very big. And he was walking. And he was the biggest he had seen. And so, with the firery balls of the fish, one of which was the sun, and the other a tall ballon …
Yes, some uncomplicated people still believe this myth, but here, in the technical vastness of the future, we can guess that the past was surely very different. We can surmise, for instance, that these two … 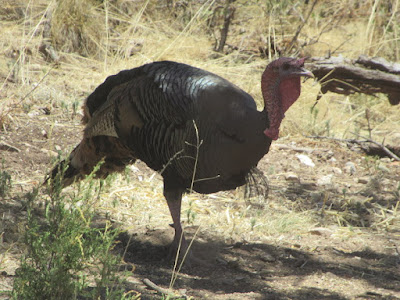 This might be only the second gobbler I’ve seen so far this year. And all the hens have not been coming through, although they might be coming through in the dark. 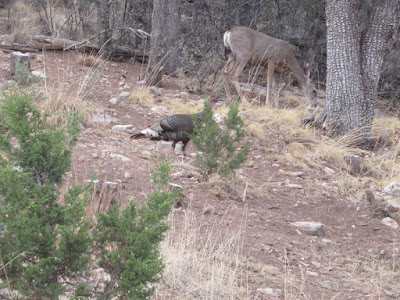 I need to download a web page on the dog days of summer. I kinda remember something about the dog star, Sirius, setting and rising in a particular way.

I was listening to NPR one morning and they did a short piece on Internet Explorer and Netscape. Hadn’t thought nor heard of those two browsers for decades. Is this a senior thing?

The mother’s five-year-old did not say a word in the car after she convinced him that the volume control ejects his car seat.

My friend Deb is a good person, has a similar sense of humor and lives off grid. All points in her favor. And I wish I could write as well as she does. Deb is impressive. As I’ve said before, she has a stellar site.
movinon.life
Definitely worth checking out. Read all of the entries over time, starting with the earliest to see how it all started and progressed. (thirteen so far).


We are of nature, not above it.
Stephen Jay Gould