Deb does all her laundry by hand. So while I was there, so did I. The Calliger hand wringer was awesome. The first time, I thought it was a lot of work. But while doing my second batch a few days later, I was enjoying it, really. Did a number of batches during the four weeks I was there. Although one morning, I had to wear warm gloves under some heavy rubber gloves. Deb says the only time she minds it is during the winter. The life of a homesteader.

It’s open range so occasionally horses or cows come through. Sometimes causing damage. I helped Deb start on some fencing. We set 44 6.5’ T-posts. I picked up a 2nd “14 lb. post driver with handles,” so the work went quicker. The first day I was getting a headache, all that pounding of steel on steel close to my ears. IBU and earplugs were not enough. The next day I dug out my shooting muffs and all was well. Many spots proved to be a bear getting the posts in. A couple days we were totally maxed. But as I staggered back to the Nash, I was thinking, not bad for 72.

When I got back to Timberon, I hung up a bird feeder. The first bird, that I saw, was a stellar jay but he was eating the scratch grain I had spread, hoping for wild turkeys. Two days later I noticed a towhee, again, going after the scratch grain. The next birds were nuthatches. As you might remember, my favorite birds to watch. And the first to actually use the feeder. The next birds were juncos.
A friend, at the north end of Timberon, mentioned that she saw a hummingbird. A couple days after I put out my hummingbird feeder, one came by. 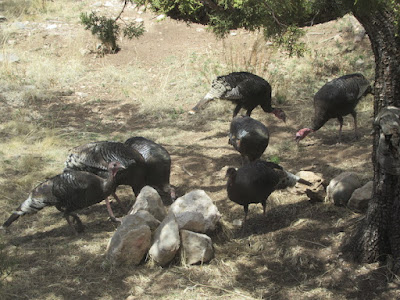 I took this shot from the galley window. One time while I was outside, without my camera, twelve hens were feeding. Haven’t seen any gobblers yet.
I noticed a deer a couple times. Guess I’ll have to put out some cracked corn.
Looks as if most of my regulars are coming back. Haven’t seen any rabbits yet. It’s good to be hearing birds again. One day I heard a bird I was not familiar with but couldn’t find it. Hope it was not a one time visit. Mourning doves are back but no white-winged doves yet. Waiting for a titmouse.

I was procrastinating with starting on all the work I want to do on the property. Yep, me just being weak minded. Didn’t last.

I do not do it as often as I should, and during my jackass-years, I did not do it at all. But now, I feel that just about everything I know must be reassessed and critically reviewed from time to time. Abandoned if necessary. It is difficult, sometimes painful and yet, so very insightful. I would imagine that those who are committed to becoming a better person just do this naturally because that is the type of person they are. Not much stopping to think about it. Then there are those like me who could use some help. Sometimes I read something or listen to a question and it gives me pause to ponder. Thank the gods that I have a mindset to work towards bettering myself.


The opposite of life is not death, it’s indifference.
Elie Wiesel