I’m definitely not cut out to be a butt-voyeur. One day I drove 240 miles and I was beat. Granted, I had not gotten much sleep the previous two nights, but still. 240 miles is an easy day for an RVer and they can do that and more day after day. I have trouble sitting for that long (I get to feeling like a slug), let alone being cooped up in a truck. I’d much rather go for a run in the mountains for a couple hours. Different strokes. Maybe when I’m half dead and no longer able to travel between the roads. 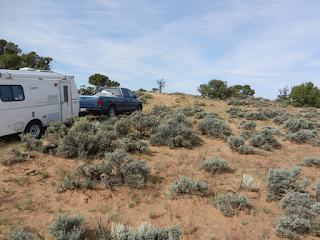 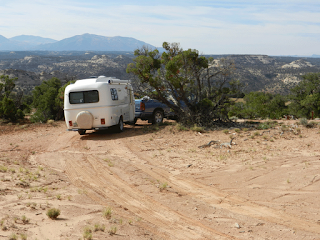 The next driving day was more like it, 76 miles (anything under 100 miles is generally good). The last 9 miles were on dirt roads in the Canyon Rims Recreation Area, south of Moab. I don’t think I’ve been here this early in past years. But then I’ve always hit this area while heading south and this time I was still heading north. I called Glen to ask for suggestions and he gave me directions for three new spots. If you recall pictures from the last 3 years, you can see why I come back. The temps are pleasant this time of year and there’s rarely other disperse campers in the area. Actually, last fall was the first time I came across other campers. While driving down a dirt road looking for a spot, I passed 2 rigs and even they were a couple miles apart. I continued on another couple miles and took a stellar spot on the rim.

It took some jockeying around once I got to the end of this spur and I put quite a few more scratches on the Dodge. I made a bit of a mess but as always in the desert, I took out my scrub rake and erased errant tire tracks. Doing the old leave not trace thing. 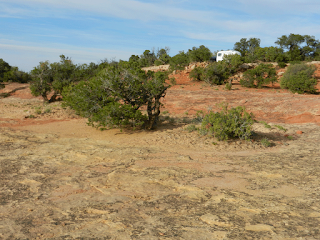 Red rock country is impressive. But mostly, traveling with two felines, I see red dirt. I planned ahead, however, and brought in a few extra gallons of water. Cats and dirt—good grief! I don’t usually keep the cat door open when in the area. Then I can snag them whenever they want in and wipe them down. One would think that since I brought them back to trees they can actually climb, they’d be somewhat grateful and give me less grief. Yeah, right.
M&M and I are taking plenty of really nice walks. Meadow can easily go for 45 minutes. Mesa is best with 20-30 minutes. If he tags along for a 40-45 minute walk, he’ll bag the next day’s walk. What a wuss. 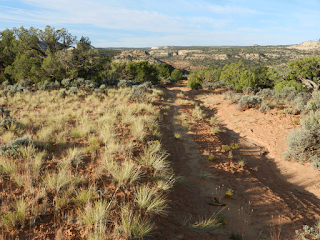 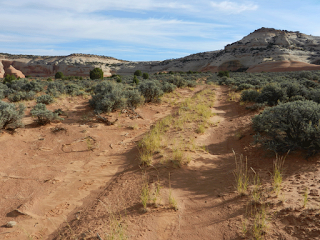 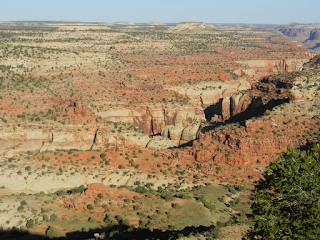 I did more running than mountain biking while here. No single-tracks, other than cow paths, but nice soft footing, pretty neat scenery, quiet, and no one around. Stellar mornings. The first day I ran out to a point and was presented with this great view.

Three weeks are up so I’m heading to Moab for supplies and web access, and then I’m coming back to the rims area to check out the other two spots Glen suggested. I plan to stay another two or three weeks in the area. Then I’ll scoot over to Chama and try to catch Siscily before she and Paul head for Bouse.br>

While in Kanab, I stopped in Willow Creek Outdoor gear (great shop—coffee, books, wi-fi, and outdoor gear). I remembered they carry stickers from Gilberg Design. I really wanted a raven for my MacBook.


Nick, a lady who works at Screaming Banshee in Bisbee, says:
I wake up each morning and think how can I cause chaos
and spread love and happiness today.