I was setting up at Brantley Lake when I heard someone call my name. It was Jerry from Colorado, who I met last winter at City of Rocks who full-times in a 22’ Lazy Daze with two felines. He brought over another fulltimer, Gary, who travels in a Class C pulling a small pickup. We talked about our trips down and then I finished setting up. We visited more over the days.

A bicycle tourist was camping down in the primitive area. Charles biked down from Albuquerque and is on a 4-month road trip, going down into Texas and then over to southern Arizona before back to Albuquerque. Pretty good shape for being in his 60s. One day we biked over to the old dam. Coming back I remembered why I no longer have a road bike. I HATE headwinds. 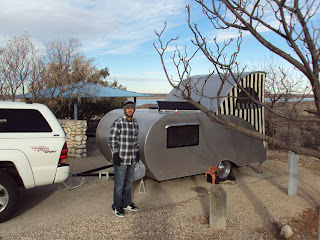 Chris fabricated this teardrop trailer, his second one. He and his girlfriend are from Florida and are heading to Yosemite. No heater—ceramic or catalytic. I’d freeze. 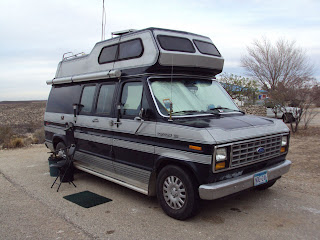 I saw Charley’s van down in City of Rocks last winter but didn’t meet him. He has a lot in Minnesota where he spends the summer and heads to Arizona and New Mexico for winters. He’s been in this Ford Class B van for 4 years and had another one prior to this one.

A couple pulled in for one night with a 19’ Airstream Bambi. I would LOVE to have one of those. Maybe after I get my 8-cylinder. Don’t really need all that room but they sure have panache. A 17’ Oliver would be more practical for me but I would lose way too much on resale. I might look into installing double pane windows on the casita. With the wall being so thin, it might be a problem. I don’t like being restricted to primarily electric sites for two or three months each winter.
Noticed a casita here at Brantley one morning as I was returning from a run. It was gone by the time I cleaned up, ate, and had coffee. Oh well.

Another winter solstice, my favorite day of the year (though each year’s anniversary of my transplant runs a close second)—the earth’s new year and foretells the coming of summer. Went for a long hike and bought some amaretto and vodka for a godmother to celebrate.

Been running most mornings, biking to the old dam and down some dirt roads every other day or so, and going for walks with Meadow and Onyx each evening. Jeez, there is a lot of rainbow cactus in the area. Packed the bike into town a couple times to bicycle along the riverside path. 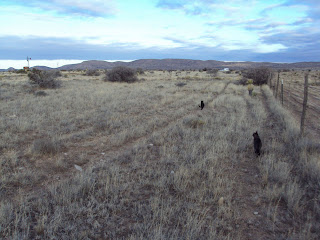 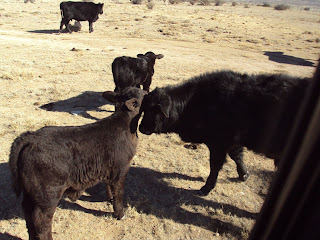 Went over towards the Guadalupe’s for a few days and camped out on BLM just east of the mountains. The rancher who leases the grazing rights, Jim, stopped by to check things out. We had a good talk. Spent Christmas surrounded by cows. A couple times one of them butted the spare tire. Maybe they thought the casita was a big, old, white cow. Onyx wouldn’t even watch them out the window. They were WAY too close and big for him. The morning I left the area, I stopped at Jim’s ranch and gave him a Peter Bowen book I was done with and a silver pendant for his wife. Nice people.

I expect M/O to jump up onto the table when they hear a can being opened. This is understandable; it’s generally cat food. However, they even want what’s in a can of soup when I open it. And it’s beefless and chickenless—just something like cream of mushroom. Unreal. And they always want some butter when I have it out for my pancakes. Hey—shouldn’t you two be out looking for mice!?

The library in Carlsbad is a good spot for wi-fi since they have tables and outlets. It was down twice while I was at Brantley, though. Luckily the Mail Service Center just a block to the west on Mermod offers free wi-fi. Didn’t check in at the coffee shop on Canyon that I used a couple years ago.
Had breakfast a couple times at the Blue House Café again. Nice atmosphere and delicious breakfast burritos.

Well, I tallied up my expenses for 2009 and they were more than $10,000. Guano. The Cherokee’s rebuilt transmission and replacing my mountain bike pushed me over. Had different columns in my notebook for groceries, gas, propane, wine and beer, annual fees, etc. Saw where I can cut back on some waste in 2010. Spent way more than I would have thought on groceries and that’s without any meat, fish, poultry, or junk food. Maybe this year I’ll eat less so I can cut back on the hiking. Maybe the sun will also begin to rise in the west.
Only racked up 5748 miles on the Cherokee for the year. Certainly do not do much of my ‘traveling’ sitting on my butt in the Jeep. Sure get a lot of flats riding my mountain bike down here in the desert. Going to look into Slime. Wore out a pair of hiking boots and well into a second plus 2 pairs of running shoes and well into a third this year. Not bad. 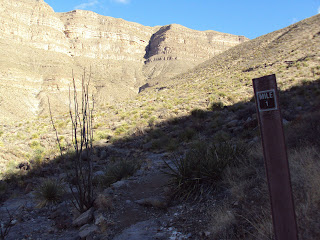 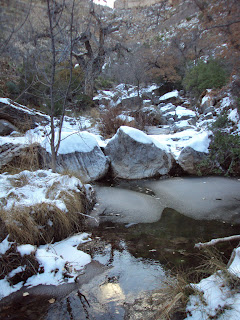 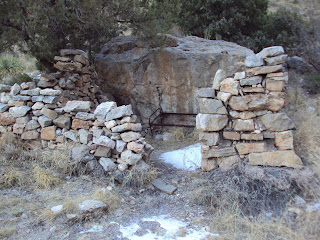 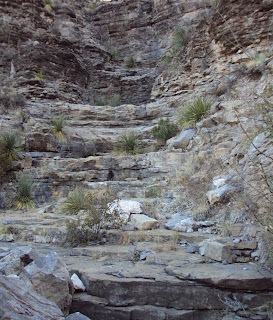 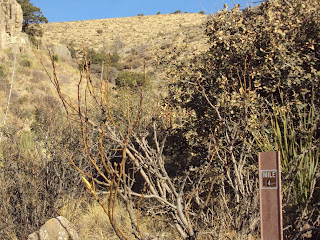 It had been snowing in the mountains to the west so I did not want to go up through Cloudcroft. I drove back north a bit where the mountains were lower. At Roswell (saw all kinds of alien craft flying about) I took rt70 west. Really enjoyed the drive, and yes, I also listened to another podcast of Wait, wait. Would love to have a cabin off 70 once it got up in the national forest.
Stopped at Oliver Lee state park. Not my kind of place. Too open, no shelters, and the sites are just pull-offs to the side of the road. Summer people must bring their own shade. Stellar hiking trail, though, with a 3,000’ elevation gain in 5 miles. One photo is looking down at the campground from the lower part of the trail—Where’s Waldo?—I mean, where’s my rig? Other shots are: a stream crossing; the remains of an old line shack at about the 3 mile mark; a place not too far past the shack that must look pretty cool during the monsoons; a shot looking down from roughly half way up; and the 4 mile marker. The trail is 5 miles to the top and another mile takes you out to a dirt road. I left the camper in the morning with the intention of only going for a half hour walk so I didn’t bring a pack. The trail was so nice that I just kept going. When I got to the 4-mile marker, I said that an 8 mile walk before breakfast was plenty. And I definitely was getting hungry. Besides, I had to drive to City of Rocks that day.

January Night Sky—On a clear night, ancient mariners easily found their latitude with the stars using old instruments such as, a cross-staff or a calabash. They just measured the altitude of the North Star. One can also use your hands. Extend your arm out straight towards Polaris—bend your wrist 90°—move your arm until Polaris is sitting on your index finger—do the same with your other hand and place it under your first hand and you now have eight fingers stacked up under the North Star. One finger equals 4° of latitude so four fingers is roughly 15°. Imagine two more hands under the first two and that will give you 30°.
This is also a stellar technique for judging how long it will take before the sun sets. I use it all the time. Hold your hands out the same way and see how many fingers stack between the bottom of the sun and the horizon. Each finger equals 15 minutes. So if you can fit 4 fingers under the sun, it will set in one hour. Way cool.

‘Much of the unhappiness in today's world comes from a neglect of the beauty of life
in favor of acquiring things and getting results quickly.’
yet another line I forgot where it’s from