evicted once again, the yungas road, feed pan,
take your last breath, pulse, the book thief,
cretin with a horse, and the sturgeon moon


Didn’t this happen here last August?! There was a threat of a fire coming over the ridge from Skull Valley to the west and sweeping down the canyon so the forest service evacuated all the campers and myself. It was a much larger fire than the one last summer with 45,000 acres burned. Ordinarily it takes me an hour to break camp when I’m out dry camping. Since I was planning to be here for over 3 months, I had all kinds of things set up and it took me 3 hours to break camp. Granted, people dropped by from time to time asking what’s up—but still. Guano. Shortly after I started out, it got dark. I HATE driving in the dark. Then the highway I had to take over to Salt Lake closed due to another fire. Traffic was creeping along for as far as I could see along the detour so I pulled into an industrial park to try to catch some sleep. How those RVers sleep in parking lots is beyond me. Anyway, it did not work out well. Definitely threw a curve to Meadow and Onyx but they seemed to handle it okay. Pulled in front of a friend’s house early the next morning. Janet and Mauricio are fun to visit with and they have a great place up in the Avenues. Stayed a few days and took care of a number of tasks that I was planning to work through when I got to SLC in October. Went over to friends of theirs for brunch one day. A stellar time. Introduced to the game of Sapo, a great south american tossing game for all ages. 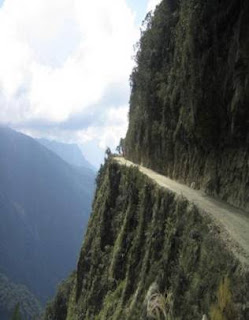 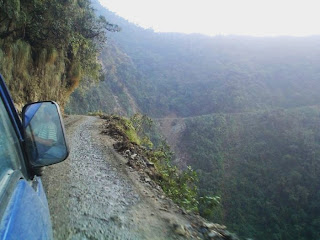 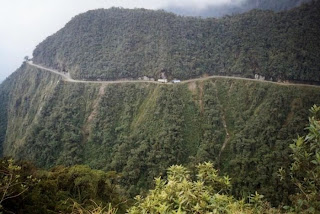 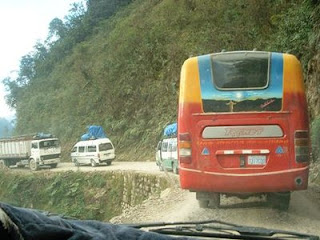 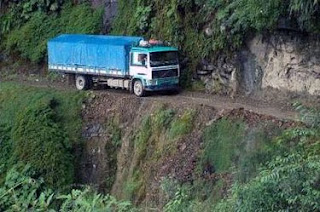 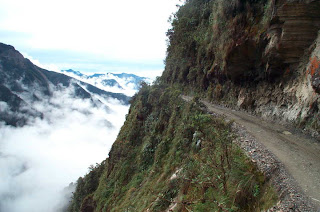 Mauricio is from Bolivia. A couple years ago he told me about ‘the most dangerous road in the world’ (Yungas Road) and showed me pictures of it. Both he and Janet have been on it. Janet said sometimes they sat up on top of produce in the back of a truck. NO WAY would one ever catch me on the road let alone sitting so high off the ground. Mauricio said that sometimes vehicles that have pulled over to the edge so another could pass by have been pushed off the road and down the cliff. Unreal. There is one guy who went off the road twice and lived. Now if he gets on a bus, many people get off and wait for the next bus or it the bus driver knows him, he won’t let him on the bus.

Feed pans from a place like CAL ranch stores ($6) or steel oil drain pans make good portable fire pits. My friend Cathy pointed out that one can place the pan up on some flat stones so the ground does not get scorched. Remember, I make small fires using only wood I can break over my knee or by stepping on it. 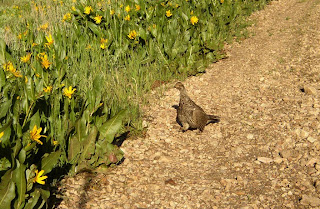 On a hike a while back, this grouse jumped out of the brush and landed in front of me. She was trying to draw me away from her little ones so I just took a quick shot and kept going.
Recently saw some wild turkeys with a new brood. Didn’t know that they had two broods in a summer. Thought that was cool. 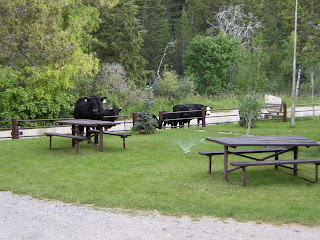 Sometimes a gate is left open or cows find a break in the fence and we then get some free-range cows in the canyon. One morning I went out and there were three pair and a bull bedded down in the yard so I closed the gate and called the rancher. I try to help the ranchers out any way I can with their cattle. I’ve seen how hard they have to work when the cows get down in the scrub brush. I would HATE doing that job. While waiting for the rancher, I was sitting in a low-rider chair reading a paperback and having a mug of coffee. The bull eventually came grazing to within 5’ of me. As you can imagine—no camera.

After WAY too many times saying, ‘I wish I had a camera with me’, I bought a small Sony Cyber-shot to carry in a pocket. I generally wear Tru-Spec BDUs so there is not a shortage of pockets. It is proving to be a real treat to always have a camera handy. I just have to remember that it’s always with me. I missed a shot of the Sapo game.

My camper is parked in the shade. The sun never hits the 50-watt solar panel on the roof but it still keeps the battery fully charged and provides juice to the LED lights, CD player, Dremel, and my MacBook. A very pleasant surprise. I was planning on taking the panel down and running it out in the sun like I did last summer before mounting it on the roof. The only time I start up the Honda 1000 is to charge the Cherokee once a month. 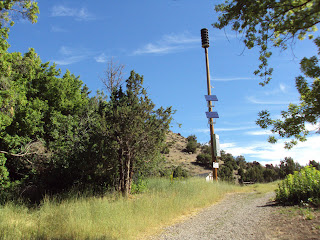 This early warning speaker is just behind my camper up in the horse pasture. It is suppose to go off every Wednesday at 4:00. It is loud enough to be heard in the whole canyon. There is an announcement about if there is an emergency, instructions would be given about how to evacuate. Like with one road—I have a choice? With Dugway proving grounds upwind with their chemical and biological weapons (defense systems), the announcement would really be saying—‘Take your LAST breath.’ For joy.

Almost hit a deer the other morning. I mountain bike to the top of the road one morning a week and do some laps around the top campground. As I was coming back down, at a pretty good clip, a deer jumped up out of the creek onto the road right in front of me. First time I used maximum braking with the disc brakes. Could not have come any closer. Sure did not need coffee to wake me up that morning. 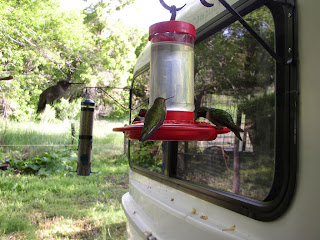 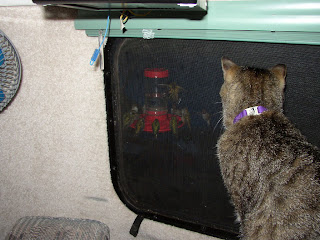 Meadow and Onyx still enjoy sitting and watching the hummingbirds.

Ordered a copy of the DVD ‘Pulse – A Stomp Odyssey’ that Lynn showed me down in Bisbee. Absolutely stellar. The flamenco dance by Eva Yerbabuena alone makes it worth getting this DVD. How can one be so attuned to exactly what every part of one’s body is doing? It just all flows flawlessly. Superb. The celebration of the global beat is explored with sights and sounds of different cultures: the Pooram festival in Thrissur, India; the Timbalada and Os Zarabe drum groups from Salvador da Bahia, Brazil (each with over 100 members!); the Kodo ensemble from Sado Island, Japan on the taiko drum; the American Indian Dance Theater performing in Red Rock Canyon State Park; the Jersey Surf Drum and Bugle Corps and the Jackie Robinson Steppers; Shafaatullah Khan from Kolkata, India; the Bayeza Cultural Dancers from Johannesburg; the Winchester Cathedral Bellringers; Les Percussions De Guinee from the Republic of Guinea; the Moremogolo Tswanna Traditional Dancers from Zeerust, The Republic of South Africa; the Qwii Music Arts’ Trust Khoi San Music from Botswana, Africa; and of course, a number of pieces by Stomp. Probably not for most people but then again, most of what I am into would not be for most people.

Janet lent me a copy to The Book Thief by Markus Zusak. A good read. Never read a book from Death’s perspective. Good characters and very well written.

The August full moon is called the Full Sturgeon Moon, when this large fish of the Great Lakes and other major bodies of water like Lake Champlain is most readily caught. A few tribes knew it as the Full Red Moon because the moon rises looking reddish through sultry haze, or the Green Corn Moon or Grain Moon.