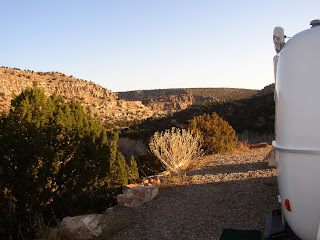 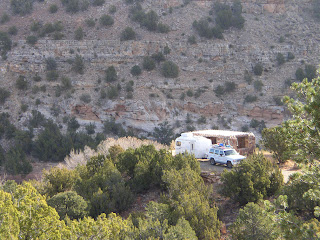 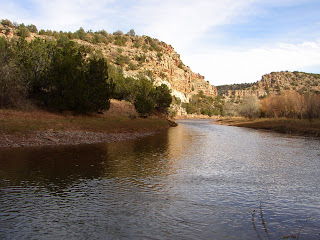 Good drive down to Villanueva. Stopped in Santa Fe at the La Mantanita food co-op on W Alameda St just a block or two west of Saint Francis Dr. Good selection and plenty of bulk bins. Also left with a great lunch sandwich. Made my day.

Nice park along sandstone cliffs with pinon and juniper trees and the Pecos River with its tall cottonwoods and mesquite. There are only three miles of trails but there are also places to just take off cross-country and explore. Another option is to take the trail along the river heading downstream. There is a fence along the border of the park but not sign for private property. Hop the fence and continue on. The path is cow-maintained and not bad at all. I hiked down just about an hour before turning back and it was all right along the river except for one spot of a couple hundred yards up on the rocks. Had my sling with me so got a good deal of practice in with all the small river rocks along the way. Doing fine with my overhead and underhand throws. REALLY need to work on my overhand throws. One can also walk the mile into the old Spanish town of Villanueva. Be sure to walk down the side streets. There are some old stone buildings still standing from the 1800’s.

Possibly my favorite terrain for going off trekking cross-country is high plains. Villanueva offers some choice opportunities for this. Take one of the trails to the top and then head off. I generally make a big loop of a few miles, keeping track of landmarks, time, and direction. My old dead reckoning skills coming back into play. One of the reasons I enjoy this lifestyle is because of the uncertainty and unpredictability of it. I don’t want a solid idea of what the day, week, or month will be like. Going off hiking where there are no trails reflects this mindset and puts a little excitement and adventure into a simple activity.
For those that do not have a good sense of direction, going off the trails can be somewhat intimidating. Just get a basic GPS, learn how to use it (maybe use geocaches for practice), take a reading of where you are starting out from, mark it down, and if you get a bit confused with where you end up, just take out the GPS and work your way back to the start position.

The elevation here is 5800’, about 1500’ less than Heron Lake so I am having the warmest nights that I’ve had in three weeks. To offset this, the single shower is nowhere near as hot as I like it this time of year. There must be some bored deity up there. I did not think showers would be a problem in NM state parks in the winter but some parks, cut down their showers to one building or even turn all of them off. NOT good. I think this might just be up here in northern NM, though (hopefully). I didn’t run into this problem last winter in the southern parks.

The electric sites were all around an open area, like staying in a parking lot. No can do. Continued up to the El Cerro campground. These sites had some decent space and vegetation between them. I got one (not difficult since there was no one else up there) off sight of the road and backed down to an overlook. After the first lukewarm shower, I was only going to stay until I needed to shampoo by hair again but the site and opportunities to explore were so good that I stayed for a couple more showers. Sure hope the next state park still has the showers turned on and HOT. 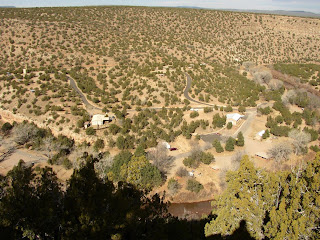 This photo is looking down on the park from the cliff trail across the river. I know, not much to look at but I wanted to present the layout. The electric sites are around the open area down on the bottom. You can see sections of the one-way road that goes up through the hilltop campground. The tiny white speck up in the right hand section is the casita.

Some mornings I grab a pair of 8 lb dumbbells and hike up the El Cerro trail for some Tai Chi practice on the hilltop. Every day I’m out hiking for a couple hours.

One day I met a full-timer while out on a hike. He’s been out three years in an older class A and has been from the Florida Keys to Alaska (did Alaska with a Ford Bronco and a tent to Alaska). I rarely come across full-timers while out hiking. They seem to have one foot already in the grave once they get to this point and not the least bit interested in doing anything to help themselves. Mere butt-voyeurs.

A Texan pulled in with a Scamp 5th wheel that he has had for 7 years. First time I’ve been in one. Larger that I had thought it would be. Not bad. Bud travels with a mountain bike and an inflatable kayak and hikes wherever he goes.

A geologist pulled in another day and told me about Valley of Fires National Recreation Site just west of Carrizozo. It is a BLM campground that he was pretty impressed with. Thought it looked pretty new. Will have to check it out at some point.

More RVers pulled in for Thanksgiving but they all stayed down at the electric sites (I knew there were gods). Snowed on Thanksgiving but melted the next morning. While out hiking on the 28th, I saw my first flock of geese heading south. I’m going to be behind them again this year. The next two places I plan to check out are a bit north of here. But at least they are at a lower elevation. 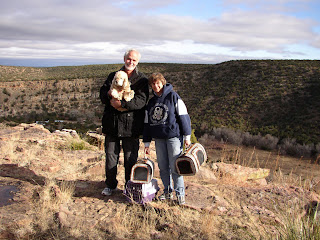 While passing through the lower campground after another hike, I noticed a couple walking along with a dog and three pet carriers. I went over to talk with them. They had cats in the carriers and that’s how they take them for walks. Nice people. Must be quite homey in their class C with four pets. The next day I saw them up on the El Cerro trail. Looking at their picture, it might seem like they are down on the flats but look to the left and you can see the campground down by the river. They usually stack the pet carriers on a pack frame but they did not have it with them.

There is plenty of flint lying around if one wants to try lighting a campfire that way. If one has not done it before, you will need some charred cotton cloth. I’m sure there are web sites explaining how to make it. One does not want to open the tin too soon.