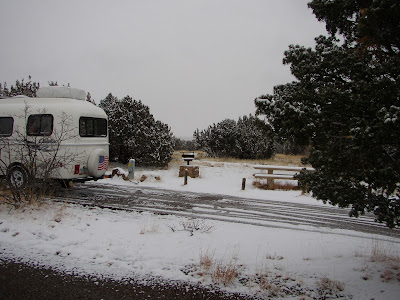 The night before I left Ute Lake, it went down to 7 degrees with the wind chill. Nice iced-up windows in the morning. Went out for a run on the trails in the morning, took a hot shower, and rolled away. Half way to Santa Rosa the visibility got pretty bad so I just tucked in behind a sanding truck for the last twenty miles. Stayed really cold all day. The Santa Rosa library had the standard firewall set up so I uploaded the last two postings and checked out a couple forums. Later found out they have wireless.

I think I woke everybody up at the state park; it was blowin’ like a banshee so no one was out and there were not any campers staying there. The Cherokee and the casita were a mess from the snow, ice, and sand. Dirty icicles hanging on everything.

Loop A at the Rocky Point camping area is kept open for the winter. There are 23 electric sites. Eight sites also have water. There are a few water outlets spread around the campground to fill up jugs. I like this arrangement. If one wants seclusion, just use one of the waterless sites in the back. The large RVs want the water sites up front. The sites are back-ins and pull-through, around a loop, just like Conchas and Ute. A lot more trees, but like in the others, sites are close to the road; some pull-through are only about ten feet off.

The Los Tanos primitive camping area is also open but all the sites are walk-ins for tents only; no sites for small rigs. December, January, and February are the only months I take electric sites but I still like to check out the primitive sites.

There are some nice trails at Santa Rosa, along with dirt roads, double tracks, and country to just go off trekking. There is also an equestrian trail. I was out walking on it one weekday and saw three pronghorns, not all that far away. Cool.

The Lion, 95.9fm in Santa Rosa, has just about the widest range of genre that I have come across. 91.9 plays some NPR programs. On Saturday after noon, they feature Car Talk, Prairie Home Companion, and Wait, Wait Don’t Tell Me, and then repeats these three programs on Sunday. Better few than none.
Came back from a run on Sunday morning and they were playing Beethoven’s Ninth—the choral symphony. An oldie but goody.

Okay, there seems to be a pattern here. If a park has a winter host—the showers will be hot. If there is no winter host—showers will be lukewarm. In the winter, I REALLY like to see some steam. So far this has proved to be true in the nine NM state parks that I have been in the last two winters. The one exception is Heron Lake—hot showers without a host. Still three more new ones to go. Sure hope they have hosts.

Definitely needed a social fix. Finally have some good restaurants to choose from. Had breakfast at Joseph’s a couple of times, lunch at the Silver Moon, and dinner at the Lake City Diner. ‘Diner’ is misleading since it is in an old bank building. Real nice. All on Historic Route 66. Stopped in at Santa Rosa’s RV Park and talked with Jean. She has a book exchange so I traded out ten paperbacks. Looks like they will all be good. Jean and her husband will be retiring down in Costa Rica, right on the beach. I was hoping they might adopt me.

Drove down to Puerto de Luna one day. Real nice drive. Locally called ‘PDL’, it is a very old adobe village. Spent a good deal of the day bicycling around the area. Forgot to pick up some PDL Chile, a unique strain of chili that has been cultivated there for over 100 years.

Which of you, by worrying, can add one span to his life-time?
Matthew 6: 25-34, rendered by Alan Watts