lookin’ good, maybe in a tree, LOL,
and SHAFF

Sure wish I were selling the Casita now. Last month I used buffing compound on the duller sections. Then I went over those sections and all the rest of the trailer with polishing compound. Lastly I waxed it. Lookin’ good. Sure hope I don’t hit too much mud on the dirt roads I’ll be doing in the next couple months. I’ll be selling up in La Grande, Oregon in early May. Hope everyone does not already have their trailer lined up for the summer. It will be listed for $6,000.
When you are waxing or washing your vehicle and someone says, ‘Hey, when you’re finished, you can do mine’—is it still illegal to shoot him? That line is SO lame. I’ve been known to respond with, ‘I guess original thinking was not called for in your profession.’ Sometimes I totally forget about following the precepts. I really need to get back off-the-gird. 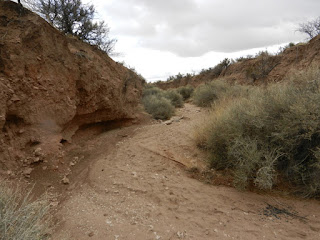 Back to City of Rocks. As this photo shows, there’s more to the place than most see. Also, a volunteer graded the old cow path to the top of the mesa and it’s a great trail for running. I was glad to see he used the top section I had pointed out to him a couple years ago when we hiked up there. He did a stellar job; probably took weeks. Now there are 6 trails at City of Rocks.

I came across Larry and Judy (from Illinois, traveling in a Casita) again at City of Rocks. We talked a bit and they invited me to go into Deming with them for dinner at the Mimbres Valley Brewery and Brew Pub (200 S Gold St. [SW corner of Spruce] demingbrew.com). What a fabulous time we had, good conversation, laughter, and yes, good beer. The pub had a varied selection of tasty brews including some with quite a punch—their Liquid Nap has an alcohol content of 9.2 and the Barley Wine (yep, it’s a beer) is 10.4. I had a glass of the Barley Wine which I liked so much, I left with a growler (64 oz.) of it. You never know what beers will be on tap when you come in, however. A month later when I went back to get a refill, every beer listed up on the chalkboard was different. I can also recommend the portabella mushroom sandwich. The pub offers wi-fi and Larry had his iPad with him. There were questions that came up in our conversation and it was nice having access to the web for quick answers. I heard more great stories of their time in Spain. They had also used to own a wine store so I learned more about various wines. What a stellar evening.
The next time we went down to Deming, they took me to the St. Clair winery. The wine tasting room is definitely worth a visit. I left with a bottle of wine a few notches up from what I usually drink (it’s being saved). The winery is listed on harvesthosts.com. Harvest Hosts offer a place to set up your RV at wildlife parks, farms, orchards and other places. Don’t think I’ll ever do it but I’m keeping it in mind if I hear about a funky, out-of-the –way establishment.

If my next trailer does not pan out, maybe I’ll find a substantial tree and build something like this. M&M would love it. Maybe I’ll reread Edgar Rice Burroughs’ Tarzan series about a guy who lived in a tree out in nature.

Did you hear about the library in Australia that was in the news when it jokingly proposed moving Lance Armstrong’s book to the fiction section?

As I’ve mentioned, I generally listen to podcasts when I’m doing some task that I’d rather not be doing. I maxed out on DNTO and LOL’s Laugh of the Day and unsubscribed. I need to find podcasts entertaining or they’re not helping me.
To fill the void, I subscribed to Laugh Out Loud (http://www.cbc.ca/laughoutloud/). It’s a weekly ½ hour program with Canadian standup comics recorded at various festivals and clubs across the country. I’ve been getting some good laughs.

Derek Edwards was on one of the programs and he had some pretty good stuff. Check out this youtube clip:

Some of you know I am not the least bit interested in ‘seeing the sights,’ or going to national parks, rallies, major events, and generally anyplace someone suggests I should try. That’s not why I live on wheels and have a 4-wheel drive tow vehicle. BUT, there are some events I would find worth attending if there was not much driving involved. One being the Sheffield Adventure Film Festival (SHAFF - http://www.shaff.co.uk). There's a trailer for this year's festival on their home page. I just don’t have a big enough boat to get there.

I HATE February! With only 28 days to get in the four ‘1800’ challenges, it was quite a scramble. But as Zuzka says when it gets tough, ‘I can do this.’ I never thought I would come to love 31-day months.


“Time is a river…and books are boats.
Many volumes start down that stream,
only to be wrecked and lost beyond recall in its sands.
Only a few, a very few,
endure the testings of time
and live to bless the ages following.”
I think this is a Masonic piece (could be wrong).

klbexplores said…
I am soon to be full timing with 3 cats. I read on another blog about an outside cage (?) that you had for your kitties.... Can you tell me what post might have a pic of your set up? I will be reading your blog as I have time as I will be traveling with 3 kitties and am looking for hints on how you have made it work.
April 7, 2013 at 10:08 AM

simplelivingandsimpletravel.com said…
One post with a photo is September 19, 2012 ‘last 3 weeks in the Whites, plinking, more mud, logger, and felines.’
I just got 4 curtain rod hangers, straightened them out, and screwed them into a window frame (so no holes in sidewalls).
April 9, 2013 at 9:46 AM