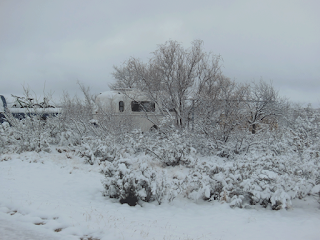 I follow the geese south to get away from the snow and cold weather—it does not always work.

I was listening to NOAA weather one morning on my eton and they mentioned that St. Angelo received a new record snowfall. The old record of 0.4” was blown away with a whopping 2.8”! Can’t see how they will ever be able to top that. What do you think, Ted? Glad you and Judith didn’t come down here this winter? I’m sure you don’t get this much snow up there in northwest Montana.

I ran across Dennis at Brantley. He had quite a few changes in his life last summer. It was good catching up on things. I met some new people who started doing the winter state park thing—Hank in a Scamp 5th wheel, Sam from Montana traveling with a Weimaraner, Alan in an ’87 class A pretty much in mint condition, and Victoria traveling in a class C with her one-eyed dog, Henry. Taking care of my social-fix.

Back in the August 2011 entry where I wrote about ‘not my realm,’ I mentioned I was going to start with heifer.org. Well, it has taken a while but I bought my first goat last month. I plan to buy an animal on each solstice. I’m spoiled with children.org, however. When I log in and go to my account, I can see how my sponsored child is doing, look at current pictures, and write to her. With heifer.org, you get no info. I would have liked to see a picture of the goat with the family or field program who will be benefiting from its milk—resource limitations. Such feedback would require more staff and increased operating expenses. Perfectly understandable but I was stilled bummed a bit. Sounds like more money actually goes out to help the most people. Wouldn’t it be cool if governments worked that way?
That got me thinking about Children International. The organization does not have all that high a rating. All the extra staffing required for the updates and the excessive mailings must cut into what goes out to the children. When my girl graduates, I think I’ll look into another organization that helps children.

I NEEDED some solstice gifts for myself (justification? rationalization? just plain wanted to buy something?) so I ordered DVDs of ‘Doctor Who,’ season 3, and Errol Flynn’s ‘Robin Hood.’ I won’t start with Doctor Who until I get back off-the-grid. Playing a show only every week or two will give me months of entertainment. I was also practical and ordered supplies: BDUs and more kilos of yerba mate for the coming year, and 15 pounds of powdered whey that should last me 6 months. Also ordered a pound of 10 ga. nickel silver square wire for some pieces I want to make. Another item was an EZ torch that can be used on my spare propane tank. I’ll sell my acetylene torch and tank on craigslist when I post the casita. The EZ torch is popular in other countries but not so much here in the states. I like the fact that propane burns cleaner than acetylene. 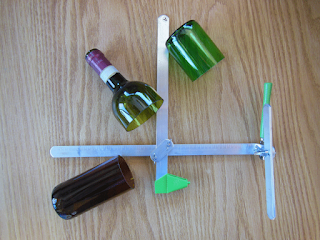 I ordered a g2 (generation green) bottle cutter. I first tried it on 3 beer bottles and everything went well. So I figured I knew what I was doing and tried a wine bottle. Not so. You can see from the top of the bottle that I had a straight cut but a crack went down into the bottom part of the bottle. After looking at the score mark I thought I knew what I had done wrong. I was most bummed, however, about having to drink another bottle of wine. Wish it did not take four days to drink one. The second bottle was cut cleanly (pretty much). I thank the gods that I still enjoy such simple things. The instructions also cover how to set up the cutter to cut bottles with curved sides, as opposed to straight, and wide-mouth jars (if one has the lid). Not bad. I’m going to start asking people if they have any empty wine bottles until I master the cutting. I guess I’ll also be asking people if they want a glass cut from a wine bottle. I don’t want to keep more than two. 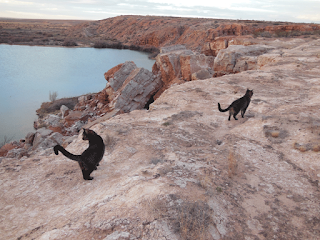 I downloaded a number of songs and albums from iTunes. I’m sure you are not the least bit interested. But, when I listened to them they brought back memories and put a smile onto my face. So I’m hoping it will be the same for some of you when you read these titles.

From Fiddler on the Roof: Zorba’s Dance and If I Were a Rich Man
Joe Cocker: A Little Help From My Friends and Feelin’ Alright
Staple Singers: Respect Yourself and I’ll Take You There
Jefferson Airplane: Somebody to Love and White Rabbit
Mungo Jerry: In the Summertime
War & Eric Burdon: Spill the Wine
Fleetwood Mac: Gold Dust Woman
Three Dog Night: Eli’s Coming and Mama Told Me Not to Come
Rose Royce: Carwash
Long John Baldry: Conditional Discharge and Don’t Try to Lay No…
Getz/Gilberto: Girl From Ipanema
Cannonball Adderley Quintet: Mercy, Mercy, Mercy
Melanie: Lay Down and her cover of Ruby Tuesday
Laura Nyro’s album, Ely and the Thirteenth Confession and
J.J. Cale’s album, The Very Best of…

I am SO chomping at the bits for a new trailer. I’ve decided on the Nash 17K—love those back windows, central galley and bathroom, 4-season setup, and heavy-duty, cambered off-road chassis. I just wish it were 3’ shorter. After living in a Casita with 3 windows around the table, I would have trouble with a trailer that had only one window there. That’s where I spend most of my time when I’m inside. I also want to have windows in three walls, not just two. I’m living in a small box—windows are important to me. I also need a window at the head of the bed. Presently the plan is to first actually look at a Nash. I’ll get to Silver City at the end of the month and there is a dealer there. If I like it, I’ll order one. I’ve done searches for used Nash 17K trailers on the web and have not seen any. Hopefully, that is because the owners really like the rig and are holding onto them.
I’m not sure what I’ll consider getting if the Nash is too big. I have not come across any smaller 4-season trailers that are as well made and geared towards getting off the asphalt.

If I wanted a larger trailer or one with slide-outs, it would also be one from either Outdoors RV Manufacturing or Northwood. My favorite floor plan is still the Outdoors RV Creek Side 20FQ. Three windows around the table; the door opens into the back of the trailer; there’s a bit more open floor space; the bedroom has 2 windows; and I like the bathroom layout. I sure hope they don’t slide the galley forward in the 17K next year and move the door to the back! I really like the back door idea. The Creek Side is up a notch; geared more towards what a typical RVer would look for in a trailer. I don’t need the frills but if I didn’t do all the miles of rough dirt roads I might have chosen it. I certainly like the floor plan.

BC Jim reminded me of Bigfoot trailers. I had always heard that they are well made but I thought they only had token insulation like other fiberglass trailers. Not so. They actually have an aluminum frame filled with rigid insulation and 1½” of injected polyurethane insulation in the walls, roof, and floor. Worth looking at.

here’s to the crazy ones 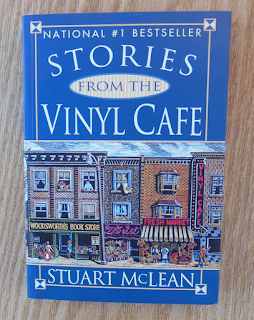 I had my mail forwarded last month and got a real surprise (haven’t gotten mail since October). Jim and Barb, from up in British Columbia, sent me ‘Stories from the Vinyl Cafe’ for the solstice. THANKS. If someone had snapped a picture of me when I opened the package, they would have seen how happy I was to see the book. Jim and Barb know CBC’s Vinyl Café is one of my favorite radio programs. That was SO cool and deeply appreciated, thanks again, Jim and Barb.


If you woke up breathing, congratulations!
You have another chance. Andrea Boydston