bear at the door, 2 postings, bow drill,
3-week stints off the grid, the Kaibab,
living for single-tracks, and mushrooms

‘I was seeing if M&M wanted to come out and play.’

I know the reasons why people choose to stay in campgrounds but it just can not compare with disperse camping out in Nature. As I got back to camp one morning after a sandbag walk, this little one was checking out the place. When I first saw her, she was at the door. Sure glad she stuck around until I dug out the camera and got off this single rushed shot. The next morning while I was working through a medicine ball routine, guess who came walking up the road? 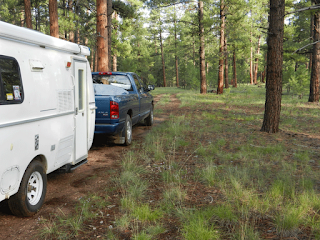 I should have posted the previous entry the last time I had web access so I’m posting two today. 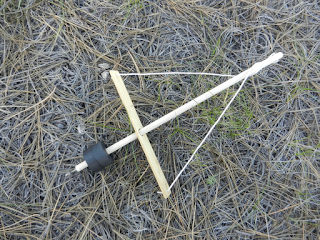 I’m back to spending time at the bench but I’m working with ‘found objects’ rather than silver. I’ll post pictures when I get some pieces made along with a photo of what they were made from. I made a bow drill. I used something I had around for the weights. I’m keeping my eyes open for a single more compact weight to use for a cleaner look. Sure has more power than I thought it would. I started with one more weight but had to take it off; there was too much force for the small bits I use. I could also probably place a thin stick in the chuck and use it to start a campfire. Have to try that at some point. 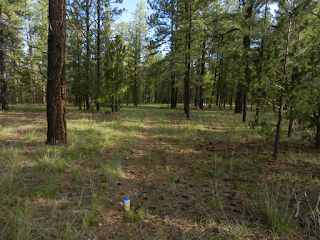 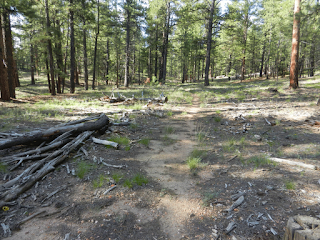 In the past when staying off the grid for three weeks or so, I was pretty much winging it as far as supplies were concerned. After this year with so far, five back-to-back 3-week stints, I pretty much have it nailed without running out of certain items too early or having leftover items that were just taking up space. Three weeks is a comfortable time span for me before making a town run. If it is hot though, it’s more difficult. I start getting a very strong craving for fresh fruit. With the cooler temperatures that I experienced for most of the summer, it wasn’t much of a problem (except for the first stint back in the Gilas). The days for a town trip can be a pain in the butt with all the stuff I have to take care of. Then I still have to drive to another section of national forest and explore the roads looking for a spot to set up camp. I can almost blame my slow email responses on M&M. I don’t like M&M staying in the Dodge too long so when I find web access, I just download my emails to a Word document to read and write responses when I get to camp. The next time I come across wi-fi, I copy and paste to email. The only thing wrong with this is my responses can be six weeks behind. Then at one point, my tracfone was canceled. They sent me notification emails that my account was about to expire but I was off the grid. Luckily it was not difficult to get it back up. Unreal. 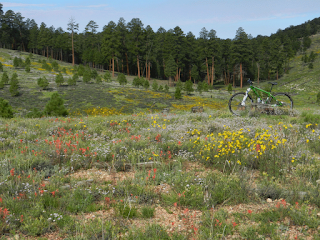 The first morning after I got to the Kaibab, I left the casita up top and made a run down to Kanab. Took care of the various tasks and stopped in at Parry Lodge where I was a workamper in ’07. That summer the Lodge employed 11 workampers (2 left early on). This summer the Lodge only employs 2 seasonal workampers. After the season two of the workampers took over managing the Lodge. I was looking forward to seeing them but they moved to Florida. I wonder if they are still workampers. Two locals I enjoyed spending time with back in ‘07, Doug and Bob, are still there and I thoroughly enjoyed visiting with them and shared some new jokes. Made my day. Doug is still writing cowboy poetry and still winning awards. I’m seeing them again on this run. 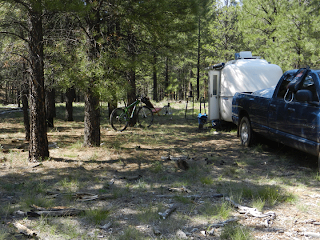 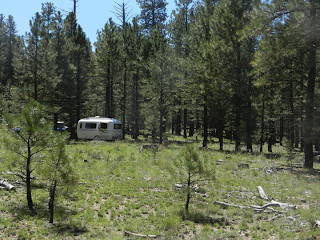 When I got back to the Kaibab, I dropped stuff off at the casita and went off looking for a spot to camp. Oh man, what a network of forest roads! I came across a decent spot and the next morning had a 3-mile drive to the spot. My kind of daily mileage. Back in 07, my weekly double-overnights on the plateau were generally 30 miles south of Jacob Lake in the east rim area with access to the Arizona Trail only two miles away. This time I’m camping where I can access sections of the Arizona Trail I have not been on, as well as a section of the Great Western Trail. This summer sure is a contrast from last. Have no idea of how many miles I’m racking up mountain biking the trails and forest roads and running the single-tracks but it sure feels good. I marked down coordinates for potential camping spots down spur roads in my road notebook and will be moving to one of them tomorrow. I made note of a couple spots with more sun since it has been getting cooler up here, I’ll shoot for one of those spots. I’ll also start positioning the trailer for colder weather camping so the early morning sun shines into two of the back windows. I’m looking forward to new sections of the Arizona Trail. I don’t know, I almost seem to live for single-tracks. It’s my favorite type of travel.
Before it gets too cold I might go down to the North Rim, try out my senior pass, and hike into Bright Angel Canyon and also explore another section of the Arizona Trail. Being able to hit the trails is one reason I try to keep reasonably fit. I love being out there. I rarely see people out on the trails, though, probably because I’m out there so early in the day, but I like to stop and talk with those I come across. Kindred souls. 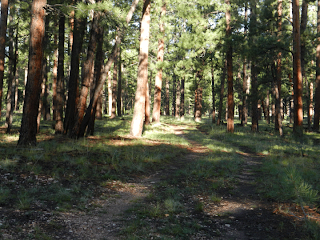 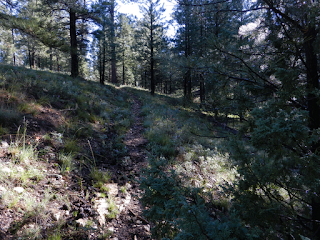 The area was pretty wet when I first got to the Kaibab and it continued to rain occasionally for the next few days. This is the first time that I‘ve ever regretted not having learned about gathering wild mushrooms. I’ve never seen so many in one location nor the varied sizes, shapes, textures, and colors. I could have easily collected a bushel around my camping spot and another when out walkin’ with M&M. There were probably 4 or 5 varieties that I have not come across before or at least don’t remember. Many were 3, 4, and 5 inches in diameter. I’m going to look some of them up on the web when I have the time, especially the large red ones with insides as white and crisp looking as apples and other large ones that reminded me of squash. There was one shiny, little orange and red one that seemed to shout ‘Don’t eat me.’ Didn’t try any of them since I had no idea which ones were eatable and I still enjoy being above the ground.

I was talking with Siscily and I asked how Jim and Beverly were doing as volunteers at Heron. She mentioned that they scooted a bear out of their campground and the bear ran into the lake. It SWAM from Brushy Point cg all the way across to the other side of the lake. I had no idea a bear could swim so far. There were quite a few people watching its progress and the bear was big enough that they could see it climb out. Now THAT’S way cool. Sure would love to have seen that.

If I’m reading a well-written suspense novel, I can refer to it as a real page-turner. For a person reading an exciting book on a Kindle, it just does not seem to give the same sense of excitement if the book is referred to it as ‘a real button-presser.’

kaBLOOnie Boonster said…
Be sure to mention how technical the Arizona Trail is, as you explore different sections. Of course I realize it will be difficult to avoid adjectives that mean different things to different readers.

So then, there is no Verizon signal on the Kaibab Plateau?