back to Bisbee IV, spending, all on wheels,
food from plants, old fogies’ pass, recycling ravens,
and more time in the burros 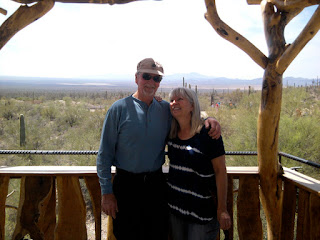 Well, it was back to Bisbee for three weeks. Not nearly as much fun as it generally is. Lynn moved to Tucson so I did not see her much. She came down for our annual dinner out at Café Rocka. And I went up to Tucson to see her new place (NICE) and we spent the day out at the Desert Museum west of town. Sure do like watching otters. The Bisbee house is still on the market so I parked in the driveway. Spent the time clearing out my storage locker, selling stuff on craigslist, distributing items to friends, and took a whole truckload of stuff over to Penny Lane. I picked up a 5’x8’ cargo trailer so now all I own is on wheels. I need to find a more central location to park the cargo trailer, at least a couple hundred miles north, maybe around four corners. Wish I had a friend with some acreage who would let me store it there. I only need to get into it once a year. Finally sold the A/C that came on the casita. 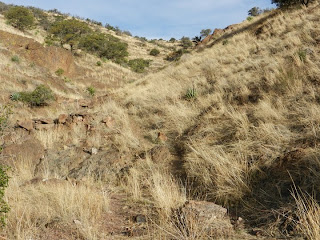 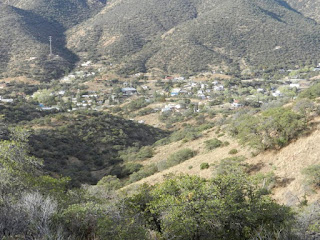 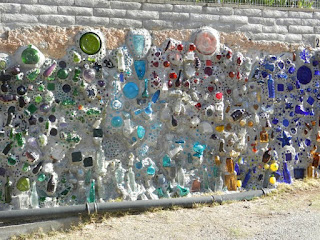 I enjoyed stopping in at Jewelry Designs by Owen to see David a number of times. I dropped off a few new pieces and we managed to get in a hike one morning. The time was pretty much all work (no longer my thing) but just about every morning before I started in I spent 70 to 90 minutes walking in Old Bisbee, getting in a few hundred stairs, or hiking in the Mules. Sure got me through the days. Here’s a shot of hiking in the Mule Mountains, looking down on Tombstone Canyon, and some local artwork. M&M had to stay in the casita the whole time but they seemed to handle it well. They spent a good deal of the time out in the window cage. As you can imagine, they bolted out of the Dodge when we got to our first camping spot. Didn’t see them for hours. I also fell back on an old pick-me-up technique during the three weeks of weeding through possessions—I bought new things. I know, I know, that’s NOT how it works. My social security gift to myself was a MacBook Pro and an 8gig nano. It was also a good opportunity to stock up for the year. I ordered 6 kilos of yerba mate; 15 pounds of powdered protein; a couple pairs of BDU pants; and a few DVDs and books from Amazon. From two food co-ops I picked up over 20 pounds of TVP, nutritional yeast, nuts, seeds, quinoa, and cous-cous. Sure glad I moved up to an 8 cylinder. I thought it was time for new glasses. Things were getting blurry and even the moon did not look as crisp as it always had. And the glare when the sun is low was getting pretty bad. You probably guessed it was not the glasses. My cataracts are getting thicker. Guano. I’m just going to live with it for a while and see how it goes. 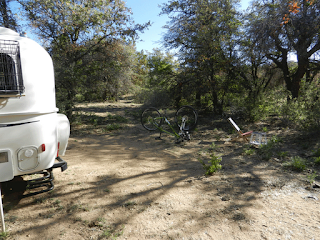 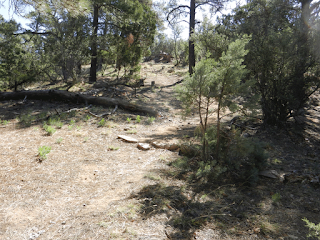 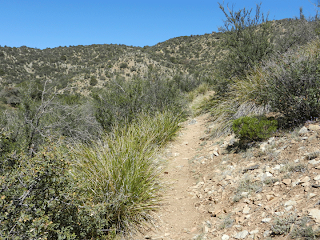 I went back to the Burro Mountains for a while. It was nice, cool and quiet. I ran up to Jack’s Peak every other morning. This was good. The other times I’ve camped here I was not strong enough to run, I had to hike up. Other mornings, I generally mountain biked west on the CDT or east on forest roads. M&M and I went for walks each evening. They sure seem to enjoy the walks more if there are trees around. 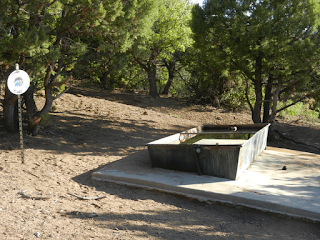 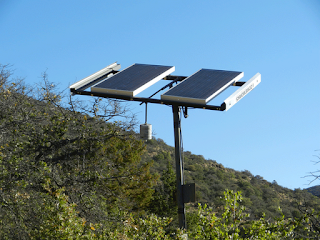 One morning while out bikin’, I came across a project of the NM Habitat Stamp Program. I do not know much about it but I will look into it when I get some time on the web. What I’ve heard is that hunters and fisherfolk pay $5 or so each year in addition to their license fee and the money gets put towards projects such as this. Sounds like a good idea. I would not mind paying $5 a year to use the national forests, even if I had to pay in each state I camped in. I was talking with someone about meals and she asked if I was a vegetarian. I rarely use the term. People don’t know what it means. ‘They don’t eat meat.’ Yes, but many call themselves vegetarians and eat fish. ‘It’s not meat.’ Oh really, I wonder what they think they’re eating when they eat fish—the leaves of the fish; the berries of the fish; the seeds; the roots of the fish? One is eating the flesh of the fish, its meat. And then there’s the term itself, ‘vegetarian.’ People think vegetarians live on vegetables. Good grief. The term refers to ‘vegetation,’ food from plants, a plant-based diet: legumes, grains, fruit, nuts, seeds, whatever, and yes, vegetables. Besides the fish eaters, you have the ‘flexitarians’—those who occasionally eat chicken or whatever. Unreal. It’s black and white—one eats flesh or they don’t—an animal is killed and then you eat it. Pretty clear. There are four or five levels of vegetarians but none, ever, eat any flesh. I don’t have much tolerance for those who refer to themselves as something they are not. The lady also made a comment about using leather. I know some eat low on the food chain (generally the term I use) to save animals and don’t use leather but most do it because it’s a healthier way to eat. I know eating low on the food chain has long-term health benefits. I have not eaten fish, birds, mammals or other animals for 41 years and I sure seem to be a lot healthier and more fit than most others in my age group. Why does there even have to be a term for how one chooses to eat? Just eat however you want—no label required. 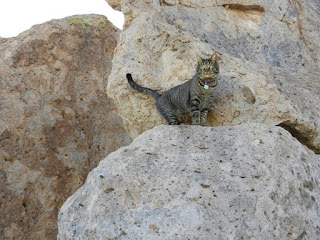 I stopped at the forest service office in Silver and picked up a ‘senior pass.’ Not that I’ll visit any national parks between May and September but I might try some in the off months. We’ll see. They would probably be the more out-of-the-way parks. 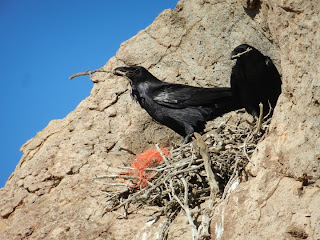 Remember the ‘April 2009 - ravens, one life less for onyx, and bikes’ entry when I posted the story about the nesting ravens with a couple of stellar photos (in my most humble opinion)? Well, I was back at the same site earlier in the year and a pair of ravens came back to this old nest a few days and picked up twigs for this year’s nest. Never knew they did that. The new nest is a half-mile away. I wonder if they are also gathering sticks from other nests in the park that they used in past years (there are quite a few). March sixty minutes sixty years—2020 minutes
There is a Zen phrase which says,
‘Take time to enjoy the garden, you may pass it only once.’

Emily said…
So glad to hear from you. Will move my "Sebastian" pin to Bisbee until you next post where you are. Have about 7 full-timers I follow and move the pins, with their names on it, to where they last post.

Hope you find a place for your cargo trailer. Have room in my back yard but then you'd have to come to NW Kansas! A bit out of your traveling zone. Take care "old man".

Just found your blog and have been enjoying going through reading about your travels. Like reading about all of the out of the way places you stay.