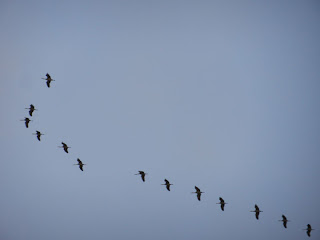 I’ve had the good fortune to get to know a couple from Canada over the last few winters. Unfortunately it looks like they will probably not be spending any more winters down in southern New Mexico. One state park will just not be the same without them around. This winter Heather and Donald lent me the ‘Lord of the Rings’ trilogy on DVDs. That was a treat. I found the behind-the-scenes features just about as entertaining as the movie. The week before they headed north, we were talking about helping the road miles go by by listening to podcasts. I told them about my favorite, ‘Wait, Wait….’ I was pleased that they were not familiar with it so I know they will be getting some laughs as they work their way up to Toronto. I also mentioned ‘Car Talk’ which they have heard of but never listened to. That show has sure expanded over the years. ‘The Moth’ was another one I thought they might find interesting. Donald and Heather told me about the ‘Vinyl Café’ from cbc.ca. I like it. It’s real down-to-earth. When I went to the site, I came across DNTO (Definitely Not the Opera) which I’m also really enjoying. So now whenever I get into a town where I can access the web, I download the latest podcasts from: Wait, Wait; The World Global Hits; From the Top; Car Talk; The Moth; Vinyl Café; DNTO, and occasionally This American Life and News From Lake Wobegon. Podcasts on my nano get me through any driving I have to do and through necessary tasks that I’d rather not be doing.

I used to think that archeology was pretty cool—all that they find and how they figure out what life was like hundreds of years ago. The last few years I’ve read articles in National Geographic about digs and I’m changing my outlook. Specifically when it comes to digging up graves. Tomb robbing is an acceptable profession and one can actually get a degree in it. There was a recent article about an excavation of a cemetery down in Panama. One burial pit held a chief, his wife, and child. I’m thinking that is SO not right. If I were buried, I would not want someone digging up my bones years in the future. ‘Hey, I’m dead here! Back off! Show some respect!’ Maybe I just have too much quiet time.

I stopped at Oliver Lee one night to break up a drive. I was there once before for a day, not a place I would want to spend time. EXCEPT for the trail, a nice 5 miles to the top of the mountain. In the morning I took a hike up to the line cabin, at the 3-mile marker. I started early so I was in the mountain’s shadow for all of the way up and most of the way down. Early morning can be the quietest time of day. The animals that make a lot of the daytime sounds away from roads are still snoozing or at least still lethargic and there is frequently no breeze. My favorite time of day to be on a trail. I don’t know, maybe one time through I’ll stay a few days just to get in some decent hikes. We’ll see. Not many rigs in the dry sites in January. 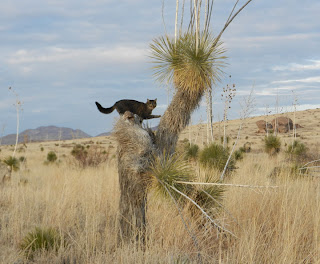 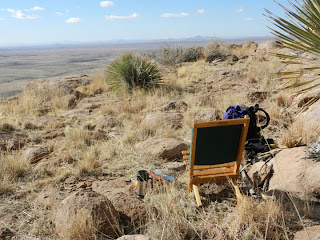 Back in City of Rocks again for a few weeks. Love biking loops around the Hydra trail and doing repeats up the overlook switchbacks. Stellar park for getting in shape this time of year. Whenever I hike up the mesa, I strap a lowrider on my pack and throw a thermos, paperback, and jacket in the bag. Real nice place to sit and read while sipping yerba matte for an hour or so. Simple pleasures. 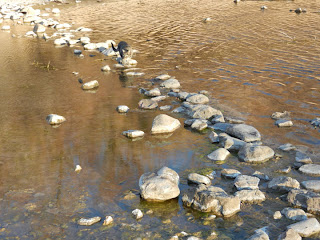 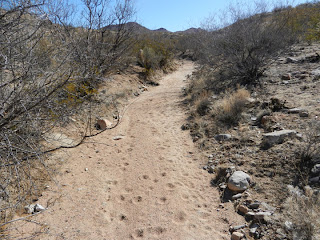 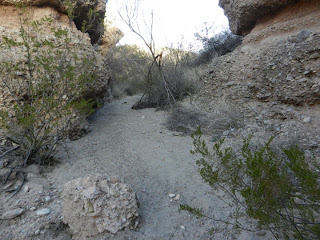 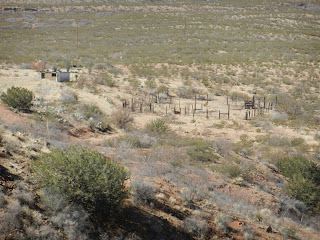 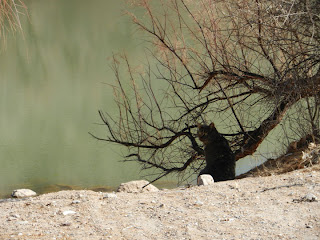 I broke one of my rules. I spent a week at a state park near an interstate. I was told Cabollo Lake State Park does not get a whole lot of RVers since most go up to Elephant Butte. Also I was able to drive there without going on an interstate (rt26 > rt187 and then back to CoR by way of rt152 > rt61). So instead of heading to the Burros, I drove over to Cabollo’s Riverside campground. Had a week of stellar hikes, didn’t see a soul while out hiking. No trails but I went up a different wash or two every day and sometimes managed a loop. Up one wash I came across what might have been an old homestead with a foundation, chicken coop and coral. The lake was so low that there was also good hiking down on the lake bed. One day I cycled up the road to the main campground and was not impressed. It would not have worked, too open for M&M.

I was cycling along one day in CoR past a rig when I noticed the tow vehicle had European plates. Way cool. I stopped and had an absolutely stellar conversation with a couple from Spain. An hour and a half just flew by. Back home their house is 400 years old! They were in the states last year and slept in the back of their van, which they had shipped over. This time they picked up a Casita and will be heading up to Alaska, probably selling the trailer when they are done with the trip. I hope they email me to let me know what they thought of the trip. I think they said they had spent 7 years in China but I could be wrong. They’ve also been to Africa. I asked if they saw a rhino and they both started laughing. They were in a wildlife reserve where one can drive around in their own car with a strict rule about always remaining in the vehicle. Anyway, they were driving along in a small car and saw a rhino off to the left maybe a 1/4 mile, angling to cross the road further along. They stopped the car, turned off the engine and planned to watch the animal as it crossed the road up ahead. When the rhino reached the road—it turned right! They were thinking about a story they had recently heard about some people in a car with one of those heavy accessory bumpers on it. A rhino had approached their car (just like this rhino was doing), hooked his horn in the grill and flipped the friggin’ CAR! Yes, that’s a guano. When the animal got right in front of their car’s hood, it turned its huge head and looked into the car with one eye with this big honkin’ horn sticking up a couple feet. ‘Don’t even THINK about taking a picture!’ Wow, I love talking with people like this. I told them about Tombstone since they want to pick up some western stuff for a relative.

February sixty minutes sixty years—1900 minutes
I have trouble believing how addictive this has become. THANKS again Diana.

Freedom does not come from acquisition. It comes from letting go.
Sogyal Rinpoche