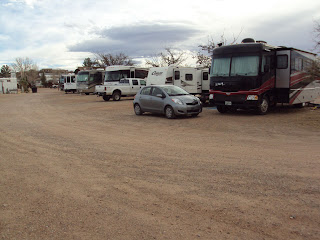 I’m almost getting to feel like an anthropologist on those rare occasions when I go into an RV park to visit a friend or acquaintance. I’m detached, observing—wondering what is this world I’m now in? Followed by—how long do I have to be here?! People actually live in these densely populated, rule-bound communal parking lots. The parks are like little urban villages in the wide, open west. Might as well live in a trailer park and have a shed out back. At night one sits outside, sometimes watching TV, surrounded by so many pole lights, party lights, patio lights, and lit up palm trees that only a few stars can be seen up in the night sky.

Most of these retired or semi-retired people I’ve been coming across the last few years seem to spend their days sitting in their rigs, driving into town or along the roads to see what they can see from their butts. Very few go out and look around where they are staying. One rarely sees them walking along the nature or hiking trails, let along going off where there are no trails, or even bicycling along the dirt roads. It seems such a waste to be out-and-about and not take the time to see what’s there. Doesn’t seem to be much awareness of nature in them or the ability to see how much one can get from the simple things. Even most rangers and just about all of campground hosts in these parks don’t seem to know what’s in the area unless they can see it from the roads or from the back of an ATV. They probably think it’s age that has turned them into the shape they are in. These victims of comfort tend to live with one foot in the grave and not even know it. Almost makes me wish I didn’t know people older than me who can hike circles around me.

The idea of nomadic freedom the RV world professes is basically a myth. These people leave their old lifestyle and go off to escape only to find themselves in a claustrophobic closeness with every rig’s curtains drawn, everyone is inside, and the next rig parked 12’ away. RVers long for independence but find themselves tethered each night to cable, water, electricity, and sewer lines. Seems more like dependency. They have reduced their possessions, simplified their life, and moved to living on wheels. There’s such an opportunity to put some spice and adventure back in their lives—and they drop the ball. And after the first year or so, many only move their rig two or three times a year. If one needs to have others constantly entertain them, then this might be the way to go. Living in RV parks and playing the tourist is quite the norm for most full-timers—but others are not satisfied with so little. 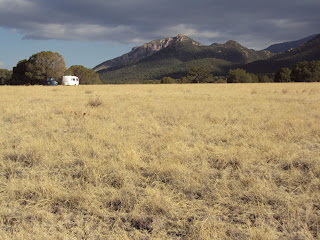 A few full-timers spend most months dry camping out on public lands or in primitive campgrounds. They learn the pleasures of sitting quietly and listening to the rush of water and wind through the trees. One’s small trailer becomes something like a small hut—protective, yet inviting one outdoors. The Outdoors is where one can go to get away from the status quo and truly have a taste of freedom and independence. The world of nature can be both a presence and a companion—nature nourishes us. It’s here that one can feel our deepest belonging and affinity. This faction probably thanks the gods that most full-timers and RVers in general, stay in RV parks, out of the countryside, and off the ungraded roads. These campers sit outside at night, look up, and don’t just see a few stars—they see the whole galaxy and more. The stars come right down to the horizon—360. Different strokes.

When making choices, opt for the plain, the simple, the functional.
Less goes wrong when you stick to life’s standard equipment.
Linus Mundy