I broke up the drive to City of Rocks by stopping at Leasburg Dam state park. If you come at it from Las Cruces, definitely drive up rt.185. Really nice drive through farm country with very little traffic (it’s all out on I-25 off to the east a bit). Since Leasburg Dam is so close to an interstate I was expecting it to be pretty full of large RVs—and it was. Worth a try though, since it was so close to my route. I really need to stay away from this type of place. Got in on a Friday and stayed till Monday morning since I don’t like to move along the asphalt on weekends. We took a primitive site along the edge and M/O flew out the door when I gave them the okay. They were SO ready to get outside after our little stay behind Jerry’s. The trails here probably only add up to a mile but they are well designed and have a few informative kiosks along the way. It’s not a bad stop for an overnight but not a place I would like to spend time.

Geez, City of Rocks sure had a lot more RVs and campers than when I was here a year ago. Quite a few rigs were out in the primitive sites but mostly just the larger sites along the road. A number of the choice spots in against the rocks are too small for regular size rigs. Lucked out and got my favorite primitive site again. Yes! The four owls were no longer there but there were a couple on the other side of the rocks. Dennis was here with ‘LET’ERRUST’ so I visited with him from time to time along with Jerry, a Colorado full-timer in a 22’ Lazy Daze. On the weekends, locals and campers pull in for a couple days and it was nice to see more people out on the trails. Generally the RVers stick to slowly cruising in their cars along the road and up to the overlook. Met a couple from Oregon, out for a couple months in their Casita and having a grand time. 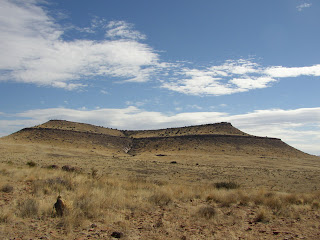 The basic parameter trail is 3 miles long and well maintained. There is also a nice half-mile tangent that switchbacks up to the overlook. And they added another loop onto the southwest corner and are working on a trail section off to the west, along the fence. From my site I was able to get in five miles on the trails with the only backtracking coming down the switchbacks from the overlook. I generally ran a lap as the sun was coming up and mountain biked another loop sometime during the day. When I wanted a change, I mountain biked multiple laps or hiked up Table Mountain. As you can see, Table Mountain is right there so it does not take all that long to get up to the top. The photo does not show it well, but on the west side, there is a notch that cuts through the cliff of rhyolite tuff and makes for an easy hike up. Be sure to bring a staff because it’s rocky ground, even crossing the field. Once on top, take an hour and hike all around the edge. There are some old campsites up there. The barbwire lying across the top separated two old mining claims. You can get in a good two to two-and-a-half hour hike but I would only do it in the cooler months since there are so many rattlers around.

One photo is looking down onto City of Rocks from Table Mountain. I was thinking they could have filmed a Mad Max movie here. The park encompasses a one-square-mile area of the Chihuahuan desert and has an elevation of 5,200’. The white to the left is where the ten electric sites. The primitive sites are up against the rocks all the way around. The group of rocks off to the right has all the primitive reservation sites. 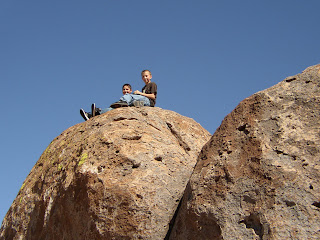 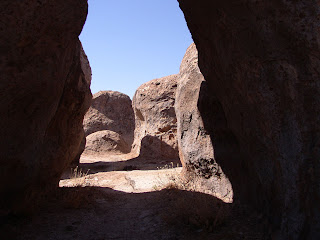 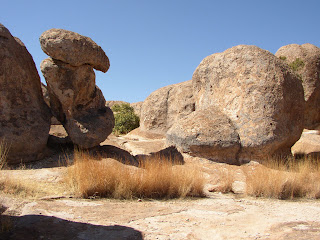 Definitely take a couple walks through the rocks. I would have absolutely loved to camp here when I was a kid. You can imagine where all the kids who come to visit the park end up. A whole lot of fun. 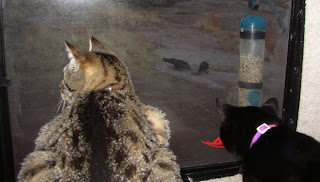 One morning there were two ravens feeding outside the back window. Gave Meadow and Onyx a little thrill. 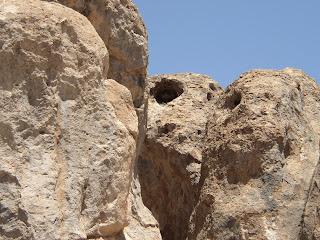 I know this just looks like a hole in a rock, but it is a great horned owl nest and one of the owls is sitting in there. I REALLY need to get a camera with a good zoom. Even while I was standing there I could not see the owl so I took out my binoculars. I brought the hole into focus and WHOA! All of a sudden the owl came into focus and she/he was HUGE. You might be able to make out a head right under the light-colored patch in the middle. A volunteer said the eggs already hatched and the little ones are still in the nest. Very nice. 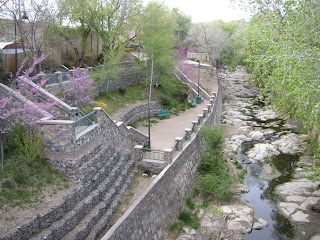 Silver City has some fine places to eat in the Historic District. I like funky little places like Vicki’s Eatery on Yankie—stellar omelets. There are also a number of nice shops, galleries, and places to have a cold one on hot days. Gila Hike and Bike on College is very helpful if you are looking for places to hike or bike in the Gila National Forest (or to purchase a bike). If you are into it, check out the Silver City Food Co-op on Bullard—a wide selection and plenty of bulk bins. I picked up a few pounds of couscous (nutritious and only take a few minutes to cook—my kind of meal). For wi-fi, check out the JavaLina Coffee House and there is always the library. When you get to Silver City, turn south on rt.90, go down a few blocks, and park next to the visitor center (on the right just past the laundromat). They have all kinds of information. Grab a copy of the ‘Historic Downtown Guide & Map’ and ‘Desert Exposure’ (a great monthly publication). Leave your rig in the parking lot and walk over the Market St. footbridge. Everything is within walking distance. There is a shot here taken from the footbridge looking down into The Big Ditch. Back in the 1870s, they laid out Main St without realizing it was vulnerable to runoff from a nearby creek. Every summer, Main St flooded. In 1902, an absolute torrent gouged a mile-long channel 55’ deep to granite bedrock. Most of what was once Main St became The Big Ditch.

One day I took a drive heading east on rt.81 for a few miles and then meandered southeast for a ways looking for places to dry camp. Most of the area is public land but I did not find any places that looked good. Gila Hike & Bike gave me some ideas, though, for disperse camping and mountain biking up in the national forest for when I swing back this way to start meandering north.

I was grousing to a friend about missing some ‘Wait, Wait, Don’t Tell Me’ programs because of the weak NPR signal where I was. She suggested downloading the podcasts. THANKS, LYNN! Now I’ll be listening to a few of my favorite NPR programs as I head towards Bisbee.

The path is revealed in the treading.