Springtime, time to start thinking of heading north. It’s nice to take a month or two to make the trip. This year, however, that time came WAY too early. My first job was in Park City, UT, starting at the end of March. Having lived in Park City in the past I knew what it was going to be like but it still felt like getting use to winter all over again. Down around Bisbee and Naco, AZ, I was wearing T-shirts and watching roadrunners.

I pulled out Don Wright’s book and DeLorme AZ and UT map books and planned the route up. Wright’s book is pretty good but even with the current edition, many fees will be higher than those stated in the book. Also, sometimes a place listed in the book is no longer there. So, anyway, it has its faults but it is still a very useful resource for those who don’t like staying in RV parks. I probably find most of my camping spots with just DeLorme, anyway. BLM land and forest roads are easy to see. One thing to keep in mind if camping on BLM land that is used as open range. Don’t set up camp next to water troughs set out there for cattle. Ranchers who lease the land could, understandably, get upset with you. Your rig and movements so close to the water can easily scare the cows away from their water

It was a good trip up. I took about three weeks for it on secondary roads, driving less than 150 miles a day with stopovers for a few nights here and there. Remember Nilsson’s ‘Land of Point’? Good road CD, though definitely not for everyone.

I generally make it a point to not travel the asphalt on weekends. If one needs roadside assistance, businesses tend to be very busy on Saturdays and are frequently closed on Sundays. I stuck around Bisbee for a Saturday night film, the Dharma Film Series film "Zen Buddhism: In Search of Self". Very good footage. On Sunday, breaking one of my rules, I hit the road. It took me seven hours to go 130 miles. The gods are always watching. The rig started to feel a little squirrelly after a while. Got out and noticed a low tire (and yes, I had topped them all up). Broke my lug wrench trying to take the wheel off. Called Good Sam road service (well worth the annual fee) and the truck that came out also could not get the wheel off. Finally something was worked out. The next day I purchased four new LT tires. The light truck tires ride rougher than P-rated tires but since I do so many gravel roads and have a lot of weight in the Cherokee, it seemed like a good route to go. They are working well. Not for everyone but fulltimers tend to carry more weight.

I stopped on some BLM land east of Safford, AZ for one night, went for a hike along a dry creek bed that had heavy brush along both sides. Had the living daylights scared out of me. A javelina came charging out of the brush a few feet away, making so much noise that I would have jumped ten feet in the air if it was possible. Sure did not need my afternoon mug of yerba matte to give me a boost after that.

I don’t do state parks during the summer season, too many people, but in the off-season, many are not too bad. Fool Hollow state park in Show Low has some nice well-spaced sites and a lot of trees in a few of their loops. Expensive though. Plenty of hiking around the shoreline. First hookups in nearly a month and a half—a bit of a treat—and NPR access. Life is good.

Second Mesa up on the Hopi reservation has free camping next to the culture center. It’s a network of dirt roads so you have quite a choice of places to park. There’s a restaurant right there and good trekking cross-country to the north. A lot of stray dogs so I could not even take Meadow and Onyx out on their leaches so we only stayed there one night. When you get close, be sure to tune into 88.1, the Hopiland volunteer radio station. BUT the main reason for going up there was to visit the Tsakurshovi shop. If an Indian shop could be described as funky, this is the place. Not a lot of glass counters with bright lights. Locals go there for ceremonial and household supplies. There are all kinds of unmarked bags of powders and herbs. I go there for the DON’T WORRY – BE HOPI shirts. This is where the design originated. My last one was wearing thin. Good quality shirts, nice colors, and a well thought-out design between the two lines.

Through the reservations you’ll probably see more horse warning signs than cattle signs. And yes, the horses (and llamas) will be right out there grazing along the shoulder. Drive safe. 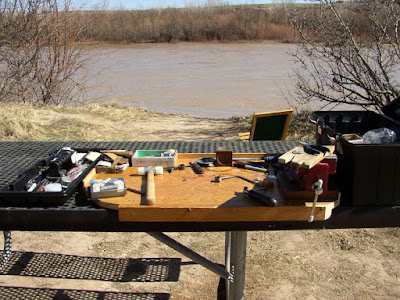 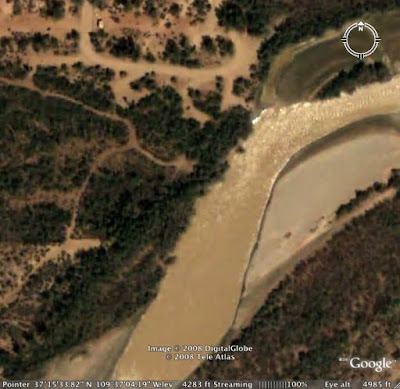 The gods must be smiling, I managed to get my favorite site again at Sand Island state park in Bluff, UT, right on the San Juan river. $10 a night. There were some geese on the other side of the river the first evening. It was spring break and two teachers from Moab were staying in a Scamp a couple sites over.
I set up my bench and did some silverwork for a few days. Back in January, Saturn and Venus were low in the predawn sky and one morning the waning thin crescent moon was in a nice position with the planets. Gave me an idea for a silver pendant and I finally got around to making it.

Moab was a zoo with Jeep week so I just stopped for supplies and kept going. Besides, my friends are both in education so they split to spring break.

As one is getting close to Price on rt.191, Horse Canyon goes off to the east and there are plenty of places to dry camp down the dirt roads going off north and south.

Staying in Heber for a month and a half as I teach silversmith classes in Park City. Sure nice to be teaching again. Then it’s on to my summer job as a campground host.

Passed a painted fiberglass trailer (not sure of the make) south of Globe, a Casita by Salt River (be sure you have good brakes), another Casita south of Moab, and the Scamp in Bluff. Four fiberglass trailers out on the road in only a few hundred miles. A record sighting for me at this time of year. Not bad.

This is another aspect of full-timing that I like, being able to take so long heading north and south each year (except for this spring). Not many other rigs in the primitive campgrounds or out on the public lands. But then again I like solitude. At this time, I have my own way of life, my own simple rules—my own realm. It seems, at times, that I am living just outside of society. Coming in for supplies and socializing and going back out into nature. There’s so much out there that I feel I’ll never get my fill. Livin’ my bucket life. We shall see.