let there be light, solstice and dancing in the movies

Think we were in the White Mountains of Arizona for this shot of Mesa on his throne. 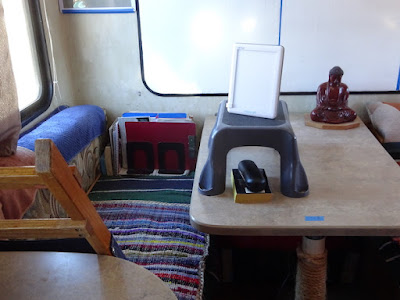 Yes, I know, not pretty. Light therapy lamps are most effective when used at eye level or above. Hence the jury rig with my stool for step-ups. Also meant to be used first thing in the morning while one is sipping a large mug of green tea and a smaller one of coffee.
I go through periods of winter blues from time to time. Thankfully, never SAD. Good grief. Anyway, I purchased a Verilux HappyLight, 10,000 lux. Love it. Don’t know if it works on winter blues but that in-your-face bright light in the morning sure is a positive jolt for the day. It’s a keeper.

As you know, the winter solstice is my favorite day of the year, the earth’s new year. It’s natural, simple, meaningful. Been celebrated for a long time.
Here’s some historical text.

“Humans may have observed the winter solstice as early as Neolithic period—the last part of the Stone Age, beginning about 10,200 BC.
Neolithic monuments, such as Newgrange in Ireland and Maeshowe in Scotland, are aligned with sunrise on the winter solstice. Some archaeologists have theorized that these tomb-like structures served a religious purpose in which Stone Age people held rituals to capture the sun on the year’s shortest day.
Stonehenge, which is oriented toward the winter solstice sunset, may also have been a place of December rituals for Stone Age people.

"The ancient Norsemen of Scandinavia celebrated Yule from the winter solstice through January.
In recognition of the return of the sun, fathers and sons would bring home large logs, which became known as Yule logs. They would set one end of these logs on fire. The people would feast until the log burned out, which could take as many as 12 days.

"The Inca Empire payed homage to the sun god Inti at a winter solstice celebration called Inti Raymi (Quechua for “sun festival”). In Peru, like the rest of the Southern Hemisphere, the winter solstice takes place in June. The Incas fasted for three days before the solstice. Before dawn on the day of solstice, they went to a ceremonial plaza and waited for the sunrise. When it appeared, they crouched down before it, offering golden cups of chicha (a sacred beer made from fermented corn). Animals—including llamas—were sacrificed during the ceremony, and the Incas used a mirror to focus the sun’s rays and kindle a fire.

"The Chinese celebration of the winter solstice, Dong Zhi (which means “Winter Arrives”) welcomes the return of longer days and the corresponding increase in positive energy in the year to come.

"In Japan, the winter solstice is less a festival than a traditional practice centered on starting the new year with health and good luck. It’s a particularly sacred time of the year for farmers, who welcome the return of a sun that will nurture their crops after the long, cold winter.

And then there’s the Native Americans
For the Zuni, one of the Native American Pueblo peoples in western New Mexico, the winter solstice signifies the beginning of the year. It’s marked with a ceremonial dance called Shalako.
After fasting, prayer and observing the rising and setting of the sun for several days before the solstice, the Pekwin, or “Sun Priest” traditionally announces the exact moment of itiwanna, the rebirth of the sun, with a long, mournful call. With that signal, the rejoicing and dancing begin, as 12 kachina clowns in elaborate masks dance along with the Shalako themselves—12-foot-high effigies with bird heads, seen as messengers from the gods. After four days of dancing, new dancers are chosen for the following year, and the yearly cycle begins again.

Like the Zuni, the Hopi in Northern Arizona celebrate the winter solstice with a similar ritual. In the Hopi solstice celebration of Soyal, the Sun Chief takes on the duties of the Zuni Pekwin, announcing the setting of the sun on the solstice. An all-night ceremony then begins, including kindling fires, dancing and sometimes gift-giving.

Traditionally, the Hopi sun-watcher was not only important to the winter solstice tradition, as his observation of the sun also governed the planting of crops and the observance of Hopi ceremonies and rituals all year long.”

Recall that I talked a bit about these three tribes on the January 2012 page, solstice and silver jewelry of the southwest Indians.

I’ve always enjoyed the movie ‘Footloose,’ as well as the re-make. Recently I watched the end dances from both movies on YouTube and clicked on a link to “'Footloose' - Dancing In The Movies.”
https://www.youtube.com/watch?v=0rLhJZTHYo4

Are you old enough to remember calling a friend and having to ask for her?
Or, the satisfaction of being selected to go outside to dust the erasers?


stand “apart from the pulling and hauling…amused, complacent,
compassionating, idle, unitary…both in and out of the game
and watching and wondering at it all.”
Walt Whitman
Table of Contents

MdmLibrarian said…
I always think of you on the Solstice. In your blog, I enjoy how you acknowledge the significance of this time in many cultures. For me, personally, I put an index card on my refrigerator and keep track of how much longer the period of daylight is! I definitely feel the effects of SAD but I don't have the patience to sit in front of ANYTHING for an extended period of time. HaHa
January 24, 2023 at 8:57 AM