Showing posts from June, 2019
Show all

it’s a wonderful life, Weed, coral reef
and OH NO 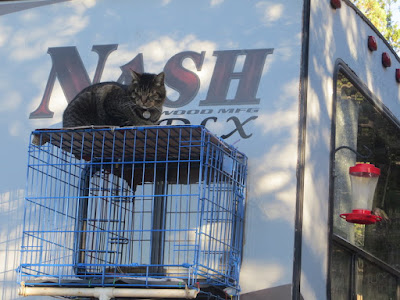 After eleven years, M&M’s window cage had acquired a good number of minor rust spots. So I wire brushed it and gave it a spiffier paint job. With June here, I figured summer was coming. But on June first it hailed, and it hailed again a couple days later. I’ve been in RVs when it was hailing, and I always wondered why the roof vent lids didn’t get cracked. That day I opened the bathroom door and there was water on the toilet lid; I looked up. Reminded me of that lame, old joke, when the guy says, There’s a dead bird. His girlfriend, with the color hair that is the brunt of many jokes, looked up. I was expecting at the worst, a crack. But there were two holes. Guano. The next day I applied T-Rex tape on both sides and I’m waiting to see if it will work. If not, I’ll put more effort into patching the holes. Then on June 10th, I had to light the Wave 6 to take the chill off in the afternoon. I had not used it for 3-4 weeks. I was getting ready to store the hose away for the
5 comments
Read more
More posts