Showing posts from July, 2009
Show all

one last time in south willow, the german,
housesitting, mudslide, seals,
an ungrateful Rizzlo, and the buck moon 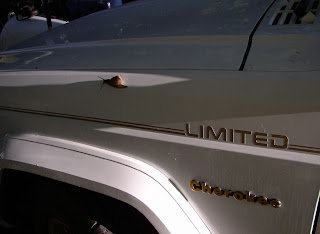 Realized it was a mistake coming back here within the first few days. Oh well, at least I found my Columbia River pocket knife that I had dropped while breaking camp last fall. Doing something two summers in a row definitely does not fit into my idea of a ‘bucket life’. At least I learned not to do it again. The first few weeks were pretty wet. It’s not often one has snails crawling on one’s car. Occasionally after coming back from giving-thanks and having breakfast, I’ll sit outside with coffee and watch Meadow and Onyx exploring and playing. They are so entertaining. What a treat. The only drawback is getting splattered, from time to time, by the hummingbirds (still going through 25 pounds of sugar a month like last summer). We’ve been going out on some nice half-hour walks in the early evenings. One evening, a wild turkey hen popped up out of the tall grass only 20 feet away. I saw some other movement in some open patches and she had eight little ones with her. By the time I g
2 comments
Read more
More posts