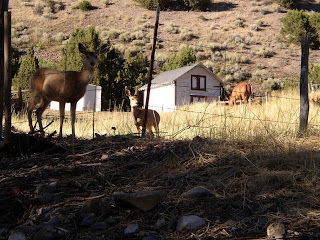 I generally follow the geese south. Now I’m thinking of following the hummingbirds. They left the last week in August. I had to, at least, dig out Wright’s book and the Delorme atlases. Planned a tentative route to New Mexico for whenever this job is over.

Went through three 25 pound bags of sugar this summer with the hummingbirds. A handful of birds stuck around for the first two weeks of September but finally left. Sure hope they still found flowers along the way. There have been some transients coming through but I’ve taken most of the feeders down, given them a good scrubbing with bleach, and stored them away for next summer. Guess I’ll try it here one more summer.

It’s been pretty slow here since the forest fire. If the weekly take gets any lower, AL&L will probably tell me to wrap things up here. Oh well, so much for working until October 15.

Finally hooked up the 50 watt solar panel. Works great. Way more power than I use. Before I head south, I’ll install it up on the roof with 3M VHB tape. Since I’m parked in the shade here, I just run a wire out along the ground.

One night Meadow was giving me a hard time about coming in. After a while I went back out with a flashlight to try and track her down by catching her eye reflection. What I saw was two large, wide-spaced eyes about 4’ above the ground. Holy sh*t! Then I remembered we’re having trouble with a big, black cow wandering around the canyon. Good grief, give me a break here. Anyway, I finally got Meadow in for the night.

Now that the pasture grass is getting dry, I put an occasional bale of hay out for the horses. What I did not expect was deer coming down and eating the hay right out there side by side with the horses. I really need to get a camera with a longer zoom for shots like that. 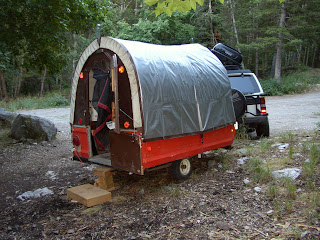 A camper came in for a couple of days with the trailer pictured here. Someone was throwing out an old tent trailer so Lee took it, ripped the canvas off, and made this gypsy/sheep herder type rig. There are short, vertical pipe holders bolted to the inside of the trailer and PVC pipe is inserted into a tube on one side, bent over, and inserted into its opposite tube. A custom cover was made for it and a tarp is generally stretched over it while camping, as in this picture. There’s about 5’ 8” of headroom. Lee is working on getting larger wheels for it. Looked pretty cool.

One morning I was sitting out next to a small campfire, reading and drinking coffee. I looked up and a doe, small buck, and three little ones were not more than 50 yards in front of me at the edge of the trees. Way cool. Not five minutes later, I heard a turkey. I got up and looked out on the road and there were three wild turkeys. Granted stuff like this does not happen all that often, but it sure brings a grin to my face and tells me how much I am enjoying this bucket lifestyle. Did not want to wait until I was in my sixties in case something came up and prevented me from going for it.

Have been taking care of some annual and semi-annual chores: doing the Casita sides with Mequiar’s Paint Cleaner and then using a good fiberglass-rated wax, going over the inside fiberglass panels with the same wax, cleaning and vacuuming the wall and ceiling carpet, apply Pledge to all the cabinet doors, a thorough cleaning of the inside, wax the Cherokee and have some things done to it in the shop, etc. Not exactly fun but it’s not as if I do not have the time. 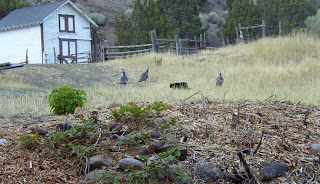 This is Onyx out with some turkeys up in the horse pasture. Something he does from time to time. If he gets too close, one of them generally flies up towards him and he turns and takes off. He sure loves to bust chops. I swear he knows every way to annoy both me and Meadow. 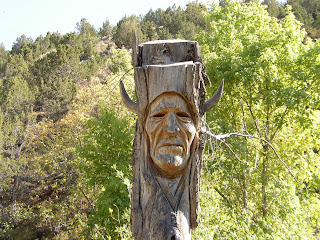 The carving is off on someone’s property just before one enters the canyon. They did a nice job with it.

And always remember…when life hands you lemons,
ask for tequila and salt
and call me over.