easy to be active at city of rocks 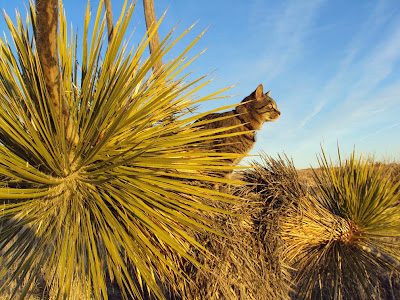 The first time back to Silver City in January, I went to my favorite place to eat, Vicki’s Eatery, and they had closed. Guano. I tried another place on Bullard next to the food coop and left half my lunch on the plate (and no, I did not upchuck it). Later I noticed in an issue of Desert Exposure that Vicki’s moved to the corner of Texas and Market. It was snowing the day I first went to their new spot and I was pretty wet having walked over from the library. The waitress recommended some hot cider and it really hit the spot. As I was waiting for it I took out a bandana and dried off my hair. Got a few looks with that move. Sat at the table in front of the electric fireplace and was in heaven as I ate lunch.

I really thought I was making progress with my mountain bike riding. A while back I went for a ride with Tim, one of the hosts at City of Rocks. An EXTREMELY humbling experience. And he’s my age! Maybe I will get one of those 2-cycle Spooky Tooth bicycles the next time I am in Bisbee. Tim gave me a number of tips, however, and occasionally I was close enough so I could observe how he was taking the turns and powering through some of the short sections. I practiced the next day and the following day went out to ride 2 laps going up and down the overlook switchbacks each lap and took 14 minutes off my best time. I was stoked. A couple days later I did 3 laps always with the switchbacks and was 17 minutes faster than my best 3-lap time. Not bad—for me.
Now I’m practicing locking the rear wheel and sliding the back end around the downhill switchbacks. I have to go into the turn faster than I’m comfortable with but it sure is fun though, when I can manage one. It’s going to take a while if at all, however. I’m pretty much a chicken-sh*t when it comes to speed on the downhills.

So far, over the last three winters Tim has added 3 additional loops to the park’s hiking/biking trail. These are great for hiking, running, and mountain biking. They are narrower and rougher than the main trail, true single tracks, so they are good sections for a bit of a challenge. He’s also working on another loop on the other side of the fence to the west of Table Mountain along the cow paths. The trails are the reason I love spending a few weeks here in late winter to get in better shape. Not all that many visitors use the trails and if they do, they stick to the one main trail and only do one lap. Doing the loops both clockwise and counter-clockwise on a bike offer totally different terrain—it’s way cool. One can also bike through the rocks in the middle of the park for some trial-type riding. Doing three laps with the switchbacks and the tangent loops and maybe a run out to the cow pond will give you 20 miles. Sure wish my runs were back up to that distance. Almost hard to believe how slow my running progress has been.

Tim is really into mountain biking. Whenever they are going to move their motorhome to a new spot, he accesses singletracks.com beforehand and makes note of all the trails in the area. So he’s good to go as soon as he arrives.
He likes to go fast. One time he went off a trail and ended up in a stand of cactus—at speed. Ouch! He took out his Leatherman tool with the needlenose pliers and started pulling out the thorns. They were really embedded deep. Another biker came by and asked if he needed help and Tim had him pull out some thorns he couldn’t reach. After he left another rider came by, asked what happened, and watched Tim continue to pull out thorns. The second rider said he had to leave because he was starting to get sick. When Tim got back he went out to get stuff to clean the wounds but all those barbs were still in there. Ah, the joys of mountain biking in the desert.
Tim and his wife bagged the traditional working lifestyle in their late 50’s and have been spending summers up in South Dakota and winters down here. He said he never wanted to work until he was 65—too many start to have medical problems just as they have all this time to play. Smart man.

For a hike at City of Rocks, there’s Table Mountain. It only takes 30 minutes to get up to the point overlooking the park from my site so it’s not much of a hike but hiking all around the top adds another hour. It’s less than a 500’ elevation gain to the top. It is a nice change of pace so I do it once a week whenever I’m here. Be sure to wear hiking boots and take a hiking staff because it sure is rocky. There’s a notch through the lower rim of rocks on the west side that you can see from Pegasus. One can also take the cow path from the gate or corner post behind the shelter, follow it back to the watering hole, and then take the cow path up the hill (marked with cairns). There are also notches on the south side of the hill that you can hike up through. No big thing as long as you have ankle support. 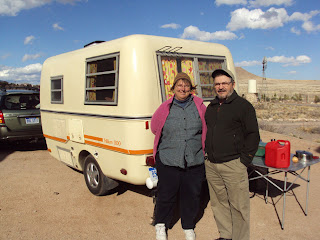 Met Marvin and Mary from Michigan. They have a ’78 (?) Trillium. Marvin did a stellar job bringing the gelcoat back and then he rewired the rig. Nice people. They used to do a lot of bicycle touring, now they are going at it this way and sure seem to be enjoying it.

A Casita camped here a couple days. Mick and Carol live in Silver City and have a 16’ which they bought new in ‘97. Active people who were frequently out walking their dogs on the trails. Might meet them for lunch sometime when I’m in Silver City.

Sure has been a long winter down here. We were getting January weather into March. Not at all like the last two winters. Oh well. I remember posting back in August wondering what type of winter we would have this year since the hummingbirds headed south a couple weeks earlier that usual from South Willow Canyon. Like they had a heads-up and wanted out of there.

Ticks are back out. Guano.

Engaging in things that you feel excited about keeps life interesting.