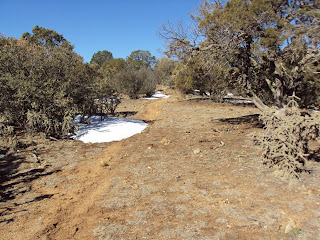 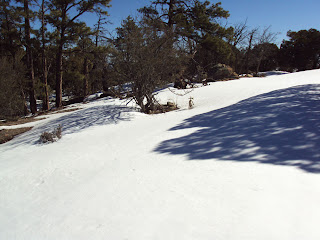 I camped near the trailhead to Jacks and Burro Peaks. Four miles to the peaks, nice and easy, and not all that much elevation gain. Open range so I was coming across some cows from time to time. When I got near the top, there was this white stuff. Since I head down to southern New Mexico to keep away from snow, it must be some type of sand. 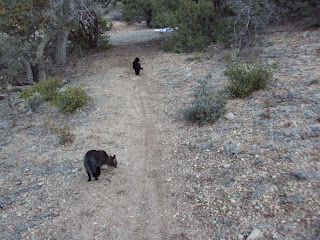 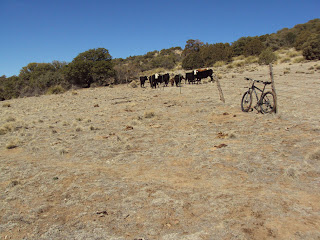 In this photo we are just about a half hour from our camping spot on our dusk walk along the Continental Divide trail. Those are my bike tracks from earlier in the day. The ride was pretty good. I rode on a section of the CD trail east of the section I did with Tim. Fell twice and had a bit of a problem at two stream crossings. Got down the inclines to the streams and crossed them fine but couldn’t get up the steep sandy banks on the other side. I don’t know, I have such fun biking 15 miles or so at City of Rocks most days on the different loops and switchbacks and feel I’m making progress then I go out on single tracks like I use to ride and I ride like a wuss. I REALLY need to get stronger. At least this section of trail is rated “moderate to difficult” rather than “for beginners”. That would have had me running over the bike with the Jeep.
I came across some cows on the trail and they just kept running along in front of me instead of taking off into the brush. When we got to a gated fence, they just moved along it a bit and gathered there. I went through the gate and took this shot. It’s like they knew I couldn’t pose a problem from the other side of the wire. You can see the CD single track in the foreground.

I scraped off the “handcrafted silverwork & lessons” lettering from the side of the casita. I spend a lot of time camping off forest roads where there is no one around and am off for hours most days hiking or biking. I figured maybe it is not wise to let those who might come along that there are plenty of tools, silver, and jewelry sitting inside.

A camper from Washington was set up not too far up the road from me. Carlos is close to 70 and is a musician. He was out there sitting by his campfire playing a fiddle the first time I walked by to talk with him. An ’89 Toyota minivan with the two back seats pulled out is used as his camper. He’s been cruising around down here for most of the winter. Carlos recently made two didgeridoo and is working on the circular breathing. 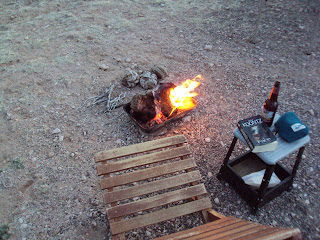 Yep, back on open range. Yippie-I-O-Ki-Yay

This camping spot was okay for a week at this time of year but definitely not the kind of place I prefer. One day after a hike I got in the Cherokee and spent 2 hours driving along forest roads looking for other places to camp. Came across only one slightly better spot and possibly some other forest roads to explore after the snow melts. Don’t think the Big Burro Mountains are going to do it for me. 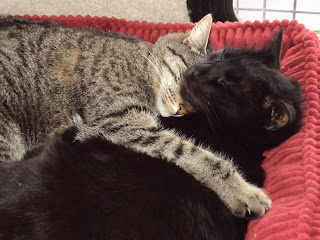 March Night Sky—In the Navajo myths of creation, First Woman, First Man, and Coyote the trickster had many trials and tribulations in the four lower worlds, so they moved on to the fifth world. All three of them were very dissatisfied with the night sky in the fifth world. In fact the sky was very boring all day and all night. The sky had only the sun and moon. No stars. No planets. Nothing else. First Woman, First Man, and Coyote decided to change it. Coyote scattered bright mica dust around the heavens, and the stars were born. Then he grouped the stars into constellations, so people could make pictures in the sky and give the stars names. First Woman helped Coyote give the moon many faces, so it could change expressions all during the month. Then at the pole position in the heavens, First Man placed The Star That Does Not Move. First Man knew that if people started with this star, they could know the whole night sky. To help everyone find this special star, First Man placed the seven stars of the Little Bear around it. The Star That Does Not Move was at the tail of the Little Bear.

As we get on in years, why have a life that is generally predictable?