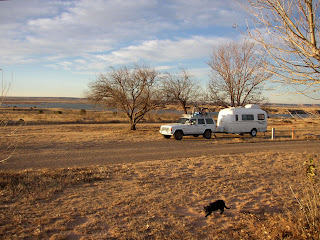 Stopped in Tucumcari for groceries (Lowe’s had tofu!!) and to access the web at the library. The library had blockers too prohibitive for me to access my blog for updating or even look in at the fiberglassrv.com forum. Also, except for Siscily’s, they had the SLOWEST connection that I have experienced in YEARS. Guano. I guess I’ll try Santa Rosa on Monday. Also stopped at the post office to mail a package to the Philippines. Only cost $4. I know, a little late to be sending out a holiday gift.

Well, Ute Lake, along with Rockhound and Pancho Villa, make three NM state parks that I will not be returning to. Although some of the sites without electric at Rockhound are not too bad. It’s mainly that Rockhound is close to an interstate so it’s generally full of RVs. Ute Lake state park campgrounds are developed in fields that butt up to the town of Logan. They are more like town and county parks than what I’ve been seeing at the other state parks. Not my kind of thing but must be very popular for family day use and camping during the summer. I prefer places quite a few miles from a town—the farther the better. I stayed out at the marina campground (24 electric sites) because there is a network of trails off to the north. I hit the trails a little before the sun came up and saw deer every morning and plenty of fox scat.

There’s another campground, with 71 electric sites, down by the park office. Same thing—out in a field butting up to the town. Out along rt.54, south of Logan, are two Ute Lake primitive campgrounds.

Wind was really blowing here. Saw more tumbleweed going by than I’ve probably seen in my life. Onyx and Meadow were pretty excited with all that was flying by along the ground.

A thing of beauty is a joy forever. John Keats