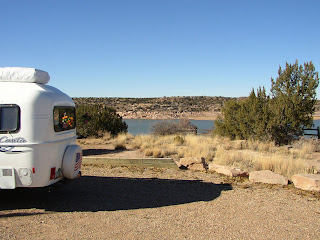 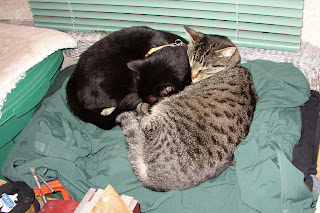 For the first hour after leaving Villanueva, I was driving north. It’s December. Maybe I’m heading the wrong direction. Oh well, got to Las Vegas. Spent a few hours there getting propane, groceries, gas, doing laundry, and putting in a couple hours at the library on the web catching up with friends and doing some work. Sure do miss daily access to the web. Love being back in NM for the wide selection of chili. Wish the smaller towns carried tofu; I eat a couple pounds of it a week. But with street names like Dos and Tres, I’m not too surprised. Not exactly a local food staple.

Nice drive east from Las Vegas through high plains to Conchas Lake. Beautiful scenery and so little traffic that most drivers waved. Conchas has a number of nice sites. I stayed in the Bell Point campground and except for the host, mine was the only rig in there for a couple of days. Personable hosts. Shower was a bit hotter than Villanueva but not by much. Still no steam yet. Elevation is 4160’ so it’s warmer than Villanueva even though it is a bit north of it.

Except for a few days with friends in SLC and Moab where they ran an extension cord out for me, this is the first site I’ve had with electric since MAY. Not bad. A bit of a treat. It’s nice to be able to use the ceramic heater to dry out the moisture that has accumulated from heating with propane in cold weather. I use a lot of DampRid in the casita. And there is NPR reception here (88.5fm)! Not all my favorite programs, however. They have Wait, Wait, Don’t Tell Me (what a hoot that can be), Riverwalk Live From the Landing, Thistle and Shamrock, All Things Considered, and a couple other popular programs but not American Routes. Oh well. 93.9fm also plays some good music with a lot of local news including pig and cattle slaughter, livestock auctions, school lunch menus, and weather.

No hiking trails but there is an overgrown road on the south end of the Cove camping area that goes up to the old Boy Scout lodge and radio tower (the main service road comes in from near the dam). There is a couple of old Boy Scout totem poles up there. The park borders on private ranch land so it kind of puts a damper on cross-country trekking. The main road in sees little use in the winter so bicycling along it isn’t too bad but I really prefer dirt roads and trails. Anyway, I’m still getting out for a few hours a day, working on my Tai Chi form, spending time at the bench working with metal, treating M/O to canned food (they are such good company), and catching up on dozens of documents that I have been meaning to read for months. It’s nice here but of the three parks, my favorite has been Villanueva. Not that I would stay at any of them during their main season.

There is a 30’ trailer mounted on a floating platform moored on the other side of the lake. The platform is nearly twice as large as the trailer so there is quite a good size deck area. The whole thing is covered with a roof so there is also plenty of shade. Not bad. I can’t take a picture because it is too far away for my camera. I used my binoculars.

Still seeing geese heading south. I tend to get a bit anxious when I see this in December and am still this far north in latitude. One small flock crashed at the lake for a night and left shortly after the sun came up. Saw my first roadrunner since last spring. I sure do love to watch those birds. This one was about 25’ from the camper. Meadow, Onyx, and I were outside watching it. The bird did not seem to be all that concerned that there were two cats less than 20’ from it; he stayed there quite a while. Although he never took his eyes off of them. Deer pass through the campground every morning and early evening.

Feels real good to be back in the desert. Hard to understand since just about everything here wants to sting, bite, or stick me. Will probably spend seven months down here next year.

One week here is enough. Feel too boxed in with all the fences.