I had every intention to spending a couple months driving from AZ to FL and back. Got as far as Hobbs, NM and realized, once again, that this was not my kind of thing. So I’ve just been wandering around southern NM for the past month. Checking out some state parks (something I wouldn’t do in season), hiking, doing quite a bit of silverwork, reading, and generally learning and experiencing what I can. Actually hooked up to electric for a couple of weeks in one of the parks. The first since Nov 1. Sure was a treat to not have the windows all iced up in the mornings. One thing I don’t like about a catalytic heater is the amount of moisture it puts into the air. You know the rim that goes around the Casita on the outside? Well, under the condensation slots in the window frames, there can be ice stalagmites built up two inches high (and yes, I do leave two openings for ventilation during the night). With using a small ceramic heater for those two weeks, there was hardly any problem with condensation. I don’t use the furnace when I have electricity since the $20 ceramic heater is so efficient and I don’t have to listen to the furnace kick on all the time.

Brantley Lake State Park was great. Will definitely spend a few weeks there next winter. Hardly anyone around the park, quiet, nice separated sites, and three places for walks. I practiced Tai Chi down on the boat dock one morning but froze my butt off. Met a lady who was traveling in a Scamp. Carol and her husband spent 14 years sailing around the Caribbean and some of South America on a cutter. After her husband died, she was living in a retirement community in Florida. She felt she was going nuts there so she bought the Scamp and hit the road. Not bad. Told her about fiberglassrv so she might be posting there. She told me about the NM state park pass. Real good deal—must get for next winter.

I planned to spend a week of so at Guadalupe National Park and get some hiking in. When I got there, the RV section turned out to be a converted parking lot. I don’t do parking lots. The ranger, understandably, wouldn’t let me park in the tenting area, which was just about empty, and had some nice sites I could have fit into. Oh well. So it was in one side, out the other, and back on the road. If you plan to pull your camper over this pass, be sure to check ahead for wind conditions. They can get nasty.

Rockhound state park was not too bad. There were a few nice sites over in the hookup section. The base sites are more isolated. People look for geodes at Rockhound and there are some hiking trails. There is one nice one, but rocky, goes up to the top of the mountain (or what they locally call a mountain).

Poncho Villa State Park was large and fairly open, almost like a big gravel parking lot. But it did have ground vegetation and all the sites were pull-though. Not my kind of place, so I only spent one night there. Met a couple from Oregon who spend eight months a year traveling in their fifth wheel. Told them about geocaching and they seemed pretty excited about trying it. Mentioned the three caches at Rockhound.

Then it was up to City of Rocks State Park. Nice. Will definitely be back next winter for a few weeks. There are ten electric sites (hosts take up three). Passed on them since they were packed tight together and there are a number of stellar base sites out alongside the rocks. My site was off the road maybe 150 yards at the end of a cul-de-sac so it was quiet and Meadow and Onyx are away from cars passing by. There are trails through the rocks and a really nice three-mile walking loop out in the desert. Most people just do the car-potato-cruise around the outside of the rocks so the trails are pretty empty. Found a group of trees where four owls roost. Never thought I would be dissecting owl pellets on my bench with solder tweezers and pick. Sure wish I could have identified all the bones. Never know what the day will bring. 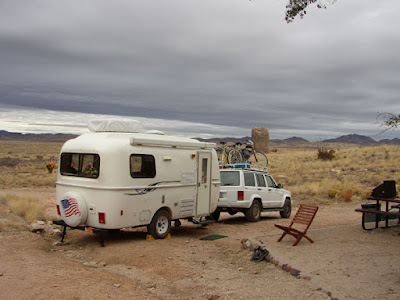 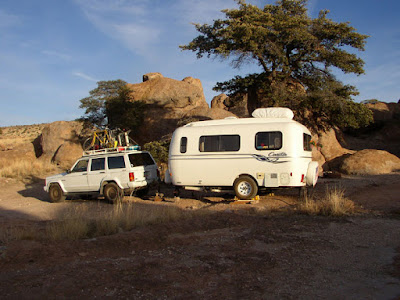 I attached a couple of shots of my site at City of Rocks so some of you can maybe see why I generally choose base sites over electric sites.

On one of the forums, someone asked what others do when they go to the outdoors.
One thing is to go for a walk under a full moon. There were some years where I would not have got much out of something so simple. Not exactly a ‘guy thing’. Sometimes Meadow and Onyx tag along and it’s fun to watch them stalk, pounce, and wrestle each other. I swear they get hyper under the full moon. At City of Rocks I took along a glass of wine, listened to Annie Lennox on my Nano, and strolled down a trail, really loving life. Another night I listened to Gabrielle Roth’s ‘Tribe’. Sure seemed appropriate.

Going for a morning ‘mug walk’ is a great way to meet neighbors if you are in a primitive campground. Just grab a mug of something hot and go out and be sociable. Doesn’t really work in RV parks since your neighbors will probably all be in their rigs rather than preparing breakfast outside. And walk, don’t ride a bike around the campground if you want to meet people. Those that ride a bike, merely exchange ‘hellos’ and roll on by. Walking offers more time to exchange a couple sentences that can lead to a conversation.

I know it’s proper to sit down at a nice place setting for meals, but… I also enjoy putting my meal in a wooden bowl and go for a slow meander around the area. It can be relaxing and insightful. Granted, one needs to truly enjoy the outdoors to appreciate simple things like this. If one’s into full hookups, ‘seeing the sights’, and racking up the miles—forget it.

The more I simplify my life and my outlook, the more I see and appreciate, and the more thankful I am. When one hits 40 or so, it might be good to no longer act one’s age, or look it, feel it, and have its standard mindset. I have a friend in her eighties and if I ever adopted, the all too common, can’t-do-give-up mindset and jumped on the it’s-part-of-growing-old bandwagon, she would no doubt slap me on the side of the head (she still hikes).

Had a ten and an eleven degree night and plenty in the teens but no single digit nights. The twenties now seem downright balmy. My second winter full timing in the Casita and it’s not bad considering how poorly insulated it is.

Probably won’t have electric hookups again until the end of May.

Have what I hope is a nice route planned up through AZ to Utah in March. No four-lane roads (I hope).

Have to find some places to dry camp around Park City in April. Even having lived there for nine years, my mind is drawing a blank. Didn’t really want to be that far north at that elevation in April. Oh well, looks like it’s going to be a long winter.

Just another idea for meeting people—grab a few paperbacks that you are done with and walk over to another campsite. Ask if they have any books to exchange. You either end of with new books or at least open a conversation.

One needs to be happy living "outside" and enjoy simplifying one's life
down to the basics.