time out and mile marker

I met a lady full-timing in a small trailer and has a dog, Raindog. I tend to ask questions. On a rainy day, a dog came onto her site, hoped into the back of her capped pickup, and stayed.

There are four or five ladies here who walk their cats with a leash and harness. One lady’s cat is Miss Kitty. I asked, From Gunsmoke?

I also met a couple who full-time in an older Class A. They use an electric oil filled radiator for heat. Have not come across such heaters so I looked it up. The inexpensive units are sealed, so no topping up the oil. All the electricity used by such a heater is used to generate heat, by warming the oil. No wasted electricity. There are probably pros and cons.

The women in the class wrote:
‘A woman: without her, man is nothing.’ 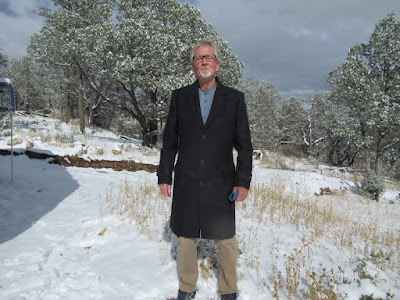 Finally got my topcoat. Sure am liking it.

This guy mentioned that his kids are at an age now where they are beginning to understand embarrassment. He then smiled and said, ‘Payback.’

I added something to my solstice tradition last year, purchasing a few gifts for myself. I might have occasionally done this in the past but now, it’s a given.
This year I purchased Dave Brubeck’s Time Out album and a couple items from LL Bean. For the bottle of wine, which will last a week, it was Robert Mondavi private selection cabernet sauvignon, bourbon-barrel aged. Nice taste.

It is easy to see why English is difficult to learn as a second language. For example, contronyms. It seems strange that a word can be its own antonym.
Left means both, departed and remaining.
Off means both, deactivated (turn that off) and activated (the alarm went off).


One way to be rich is to cultivate a simple lifestyle of few desires.
Eat less, keep active, don't worry, be happy,
and help other people.

JudithK said…
I've been reading your posts for quite a while now. I am now mystified by your number calculations at the end of this post. But at least you look snazzy and are still out and amongst them, so you haven't gone bonkers over numbers. I gather your computer woes have been resolved as well. Hope so.
January 2, 2021 at 6:28 PM

simplelivingandsimpletravel.com said…
Hi Judith
Not yet bonkers. Thanks for the chuckle.

As to the numbers, they refer to keeping fit. I introduced them on the 2011 June and the 2012 October pages. The “sixty minutes sixty years,” refers to being active to 60 minutes each day. The “triple 18” is similar; striving for 60 reps each day for Upper body, Core and Legs. It works for me, although some months are harder than others.

My MacBook Pro is back @ Apple repair. Bummer.