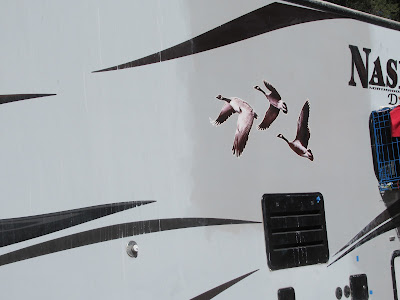 I pretty much stopped taking care of the Nash after those surgeries, wound care and PT. The siding turned chalky. I took a week and applied polishing compound to a section each day. Some sections needed rubbing compound. I’ll wax the Nash this winter or in the spring. One morning this shadow on my 5x8 caught my eye. 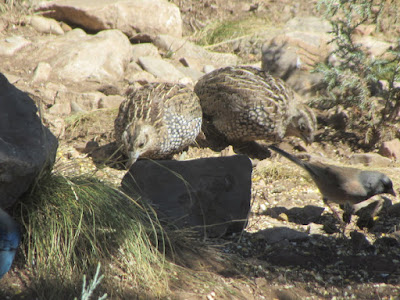 The Montezuma quail stuck around until the beginning of October. 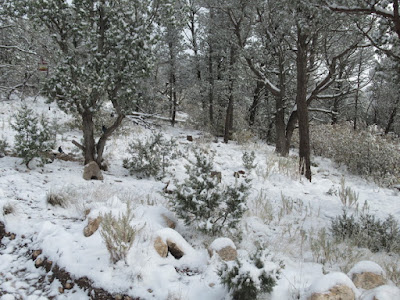 One day last week it snowed all day. I leaned the ladder against the Nash so I could climb up and sweep snow off the solar panels. Had to do it four or five times during the day. I also used the shrub rake three or four times to clear areas where I threw out scratch grain and cracked corn for the birds. And it was cold! It never entered my mind to take a picture. The photo is of the second day when much of the snow had melted. But was still cold!. Ran the Wave 6 all day for the two days. I only had to do that one or two other times. Had to pull out my winter mummy bag.

Next week, I’ll be down in one of the NM state parks. I’ll move between five parks during the winter. At the last one, my focus will be on purchasing some property in the area. Sure hope it works out. I have to get out of Timberon.

I made a first year mistake during the snow week. Forgot to pour RV antifreeze down the galley drain. Was two days before I remembered. Yep, the gray water froze and would not drain. Adding antifreeze does nothing for the ice but at least new water does not freeze. Dropping down 3500’ to the park will magically turn the water to wine. Oh, wait, it’s ice to water.

This winter the NM state parks are restricted to NM residents. Most of my winter acquaintances are from other states. Will miss them this year. Maybe I’ll acquire some new ones.

In Timberon, public radio cames up from El Paso, Texas. Before Wait, Wait on Saturdays is Planet Money and How I Built This. Two programs I enjoy. When I get down on the east side of the mountains, PBS radio is broadcast from Eastern NM University in Portalas, NM. No Planet Money and How I Built This BUT, they broadcast, The Best of Car Talk. I’ll be in for some laughs. And I’ll also be able to hear the Sunday Puzzle with Weekend Edition's puzzle master Rick Shortz, with Lulu Garcia-Navarro. Life is good.


The earth has its boundaries,
but human stupidity is infinite.
Gustave Flaubert, writer

JudithK said…
Hope you've made it to a warmer spot by now. Glad you are an NM resident and can pick and choose. And maybe you will be more cheery about the outside world after this weeks events. Or not. Anyway, hope all is well.
November 8, 2020 at 5:43 PM

simplelivingandsimpletravel.com said…
The program is called, "The Best of Car Talk," replays of their best shows. Not all public radio stations offer it; their budget is tight. Maybe it can be streamed from somewhere.
November 10, 2020 at 12:42 PM