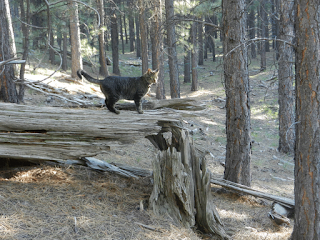 Well, we headed south from Pinedale towards the Mogollon Rim. There were deep tire tracks in the mud and some standing water from all the rain along the 8-mile stretch. I was thinkin’ that if it rained, I would have to wait for a couple days of sun or I wouldn’t get out of here. I did not want to get stuck in the mud with a trailer. At one spur road, I pulled over and jogged down it looking for a camping spot but found I would not have been able to get the rig in far enough to be out of sight of the main forest road. I continued on and headed west along the Rim Road (which also had deep ruts and mud in spots) and did not come across any accessible spur roads. This area of the Whites didn’t have the appeal that I look for in a pine forest and I started playing with the idea of heading up to the Flagstaff area the next day. I’ll save other areas of the Whites, maybe around Overgaard and Heber, for another year. Eventually I turned north on another forest road and pulled into a spot for the night. M&M had been in the truck for hours so I let them out for a few hours before dark. Later, Meadow was looking somewhat apprehensive after she noticed the window cage was not set up. ‘Uh, oh, we’re not staying here.’ I was hoping for a dry night so we could get out of here early in the morning. It rained—heavily. Guano. But not for too long. The map showed some hills along this route and I was concerned about the road. 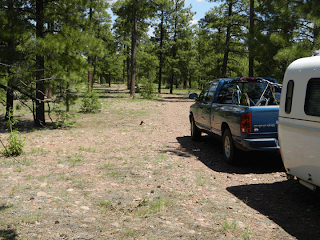 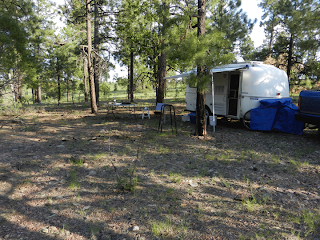 In the morning, I went to bike up the road a few miles to check out the road and hills. It did not start off well. The road did not look all that wet but the mud coated the treads and packed the area between the forks and the tires. Not good. Luckily the mud only lasted a couple hundred yards (even though the road surface didn’t appear to change color or texture, strange) and I began to make progress. I biked past a couple other forest roads but they led to lower ground so I didn’t check them out. Then I came to a road that headed to higher ground and chose to see where it went. After a bit I biked down an unmarked spur road and came across a spot to camp that looked decent. More open than I would have liked in the summer but doable; maybe I’ll stick around. Biked back to camp (bogged down in the mud again), let the ground dry up a bit and drove to the new spot. 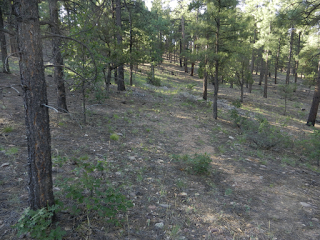 In the morning, I went for a run up the road. It wasn’t suitable for pulling a trailer but it was great for running and hiking. It went for miles and hooked up with other little-used roads and a single track. Not bad. So I decided to stay for a third 3-week stint in the White mountains.
This has been a treat, spending the summer months in Arizona. While living in Bisbee and Naco, I got use to not having daylight savings. Being an early morning person, I loved it. Sure feels good getting up so early to a brightening sky. 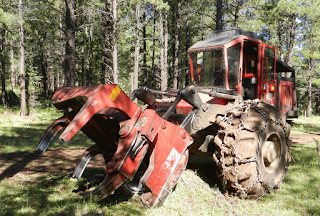 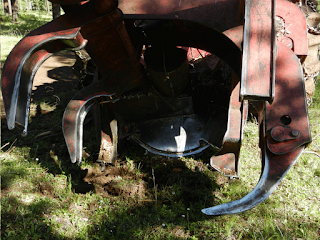 While out bikin’ one morning I came across one of the machines being used to cut trees in the area. It’s a Valmet 603 three-wheeled feller buncher. Second time I saw what is currently being used. The first time was a few weeks ago down a ways from where I was camping. It seemed the guy had cut down 4 trees and neatly laid them out in only five minutes or so. Quick and efficient without damaging the trees left standing. I know it is part of keeping a forest healthy but I just don’t like seeing healthy trees cut down. But it sure beats clear cutting.

I haven’t shot my longbow much since last fall. It was tough when I first got back into it so I started using a tension-tube to strengthen the upper back muscles. It got easier. As you can see, I painted the arrows yellow so they are easier to find. With the judo points, however, it was probably not necessary; there’s no way they are going to dig in under the grass and pine needles. Feathers sure get trashed, though. It’s a hoot walking through the woods and shooting at tuffs of grass, pine cones, branches, whatever. Simple pleasures. 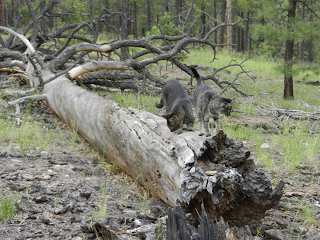 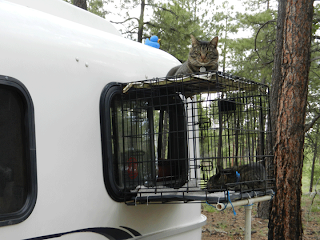 I generally enjoy having felines along with me. There’s pleasure in just watching them move about, interact with each other, explore, and stalk. The domestic feline, with their self-sufficient independence, are truly animals that could take off at any time and make it on their own. Society does not program us to like cats and I never cared much for them until I picked up a kitten at a party in college (it was the beer). Sure glad they are a part of my life. Meadow is always up for a walk and most of the time, Mesa joins us. The first week in a new spot, they pretty much stay with me then race back to camp when we get close. I vary the walks going off in different directions and making clockwise and counterclockwise loops but sometime in the second week they start lagging, going off to more explore the area and don’t wander back to camp for an hour or so. Yep, independent.

One morning I finally biked north to rt260 to check out the condition of the road and it was fine. Even the hills were in better shape than the relatively flat road I headed south on.
In the last 12 weeks of disperse camping, I’ve only come across 4 RVs and 3 tent groups. Not bad. While in the fourth spot, I heard quite a few vehicles probably pulling rigs on weekends, off in the distance. I guess I’ve been finding the less popular areas to camp. Wish I always could.