last two rattlers, eclipse, single burner, javelina,
blocked panel, and back out where I feel best

One afternoon I was sitting in a lowrider working on my Mac. I heard what was getting to be an all too familiar sound and looked up. There was Meadow ‘on point’ in front of some brush at the base of a boulder. I couldn’t get Meadow to back off until I got pretty close even using some expansive arm movements. I did not want to set the rattler off and with all the noise he was making, he seemed all set to let loose. This was way too close to home. He was hard to see and after a short while he moved off to a break in the rocks, rattling the whole time. That was something new I learned about rattlers. A couple days later I saw my fifth and last rattler since being back to CoR. This one was smaller but still on the edge of my campsite. Not good. No way am I ever going to be here again in May.

The idea of a solar eclipse never did anything for me, not the least bit interested. A volunteer at CoR told me about the eclipse last month and gave me an info sheet along with a pair of plastic viewing glasses. So I watched it. It was SO cool! Definitely a recent highpoint. Thanks, John.

Jim and Beverly, the couple I met at CoR who live in a tent, are hosting at Brushy Point campground in Heron Lake State Park. They’re good people; stop to say hello if you do any camping at Heron. Also be sure to stop at Paul’s Three Raven Coffee House in TA (as I always suggest).

I had both of my lowrider chairs under the casita and I put them inside when I broke camp and drove over to the Burros. What a mistake. I was catching and releasing crickets for nearly a week. 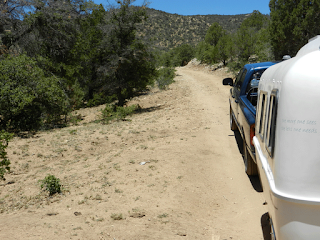 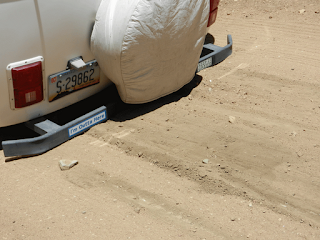 I originally purchased a two-burner Coleman stove when I started this lifestyle. I got the fuel-type model since it brought back memories of car camping in the late 60’s and early 70’s. Recently it dawned on me that I have never use the second burner. Duh! Kind of tough to do when only preparing one-pot meals. My backpacking single burner stoves are too small so I bought a Coleman single-burner. It’s propane but I can live with it. I’ll drop the two-burner off at a thrift shop. Luckily I generally stop to think things through before making a purchase. 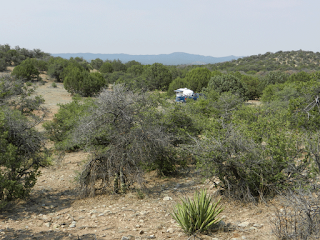 Some of the forest roads I travel down have short rises and dips so the trailer hitch jack and/or rear stabilizers drag. This dip had the stabilizers digging trenches and the rear bumper grading the road. At some point, there’s not going to be much left of this casita. I’m really surprised the rear stabilizers are still on. I have to hammer and pry them after these mishaps so I can lower them.

Well, even with my Nikon in my pocket, I missed a shot. One morning after giving thanks, I was sitting outside having some yerba maté and reading. I sensed movement over by the casita and there was a javelina nosing at the screen door with Mesa under the rig taking it in. There was no way I could have eased the camera out of my pocket without the peccary noticing the movement. Guano. The javelina then walked in my direction, came around a bush, and stopped less than 8’ away, looking right at me. At this point I was REAL nervous. I was on my shortest lowrider and we were pretty close to being at eye-to-eye level. Then it turned and bolted. I love my encounters with wildlife in this lifestyle but some are definitely a tad more tense than others. 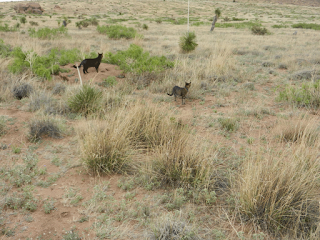 I nixed the idea of getting the 35 gallon water tank for the bed of the pickup. I didn’t want to give up the space. I have a number of Reliance jugs and I recently bought three 5-gallon white buckets. The buckets have a #2 plastic rating so they’re approved for drinking water. The buckets can be stacked when not in use so they don’t take up much room. Now I can easily stay out for nearly a month. It’s tough for me to stay out longer than two weeks in the summer, though. I really start to miss fresh food. When I reach a town, a quart of V8 sure hits the spot. In cooler months it’s easier for me to do extended stays off the grid. My 15 gallon city water holding tank is crammed with dry staples. I even used a number of small bags so nearly every square inch of space is filled. It will probably be months before I have access to a natural food store with bulk bins.

It feels so good to be out of the state parks. I’m FINALLY psyched to head north to check out new forest roads. Still don’t know why it took so long this year. Back to sun showers. I forget if I’m on my third or fourth bag since starting this lifestyle. What a priceless camping item. Couldn’t do this lifestyle without one.

Sometimes the solar panel does not seem to charge the house battery as efficiently as it normally does.

One afternoon there was quite a bit of smoke rising from a fire over the hills to the north. Around 2:30 in the morning I awoke to a strong smell of smoke. Uh-oh. I went outside but there wasn’t any nearby smoke nor did I see any glow from the other side of the hills. I guess the wind had veered even though that did not seem to be the case. The prudent thing would have been to back the Dodge into position for a quick hookup, load camp stuff into the back of the truck, take off the wheel covers and raise the rear stabilizers on the casita, and whatnot. Instead I got back in the sleeping bag but sleep was pretty much not an option. Anyway, when I went out in the morning everything was fine so I let M&M out. Pretty strange. I frequently don’t even unhook the chains when I disperse camp; just pull forward enough to level the trailer. I use my mountain bike to go off and explore the miles of forest roads in the area. This time I moved the truck for a couple of reasons but that night I was regretting it.

I stopped in Silver for laundry, gas, propane, water, food, and web access. I should be able to resupply in a couple weeks or so. It’s up rt180 and new spots to camp and hike.


We act as though comfort and luxury were the chief requirement of life,
when all that we need to make us happy
is something to be enthusiastic about.
Charles Kingsley, a 19th century English clergyman