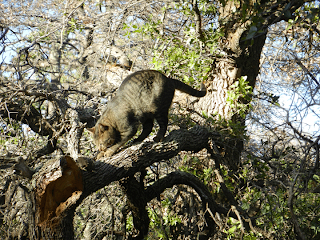 M&M have been giving me a hard time about coming in at night the last month or so. From time to time one or the other has spent the night out and a few times both. Not good. They had been doing fine with nightly access to their window cage now that it’s warm enough to keep the window open all night. Have no idea why this has started all of a sudden. It’s not like this lifestyle is new to them. If it continues, whenever I’m around camp at noon, I’ll boot them out (with their water bowl). It might then be easier to snag them just before twilight. 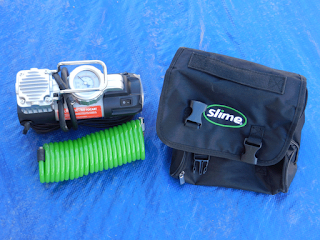 The bicycle pump was working well with the casita and Cherokee tires but the larger tires on the Dodge proved a bit too much for me. I wimped out and purchased a 12V Slime tire inflator. Sometimes being a wuss doesn’t feel all that bad. The pump works well and it’s much faster than I had anticipated for being so small and compact.

There have been times when an email finally gets through to me or someone mentions that my email address does not seem to work. The problem is generally using ‘.com’ rather than ‘.fm’. shalyard@fastmail.fm 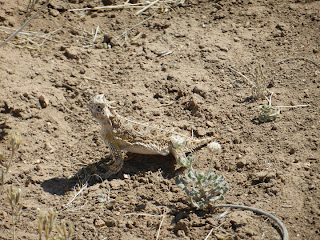 I don’t think I’ve ever been in a campground in May. I went back to CoR after the Burros. Usually, once I get out of the winter campgrounds and back out into Nature, I’m good to go till late November or early December. For some reason I’m dragging my feet about heading north this year, even though I plan to not go all that far. Strange. Generally I’m chomping at the bit by the time April arrives. Sure hope I have better luck finding the secluded kind of places I like to camp than last summer. At least it’s pretty deserted here and it’s cooler than it was back in April.

Having access to water makes it a decent spot for some spring-cleaning. I realized that it has been 5 years since I took the covers off the seat cushions in the casita and washed them. Didn’t know water could still be so dirty on the third rinse. Better do this yearly from now on and never again by hand.

One morning I was out on the trails and I saw the largest peccary (javelina) that I have ever seen. It looked like a freakin’ warthog! Glad I was on my mountain bike. And I don’t think I’ve seen a horned toad here until this year.

A couple of mornings I got a late start so it was quite a bit warmer when I hit the trails on my bike. I used to play a computer game that was based on racecars. One controlled a car as you wove in and out of cars you were passing. By the time I got onto the trails the lizards had thawed out. Countless lizards ran out onto the trail while I was out there and most of them ran along the trail for a bit rather than just crossing it. Luckily I don’t think I hit any but it was just like the computer game. I kept getting flashbacks for the next hour and a half. It’s not like I’m just cruising along. I like to keep my speed up even though I sometimes go off the trail or spin out in a turn. No granny gears. But hey—I’m only in my 60’s.

This is the type of lizard that gave me the flashbacks. I believe it in a NM Whiptail. As you can see, I did not take the picture out on the trails. Yep, Mesa brought this one in and let it go. Two days later I was able to corral it by the door and grab it so I could put it back outside. Oh the joys of living with felines. 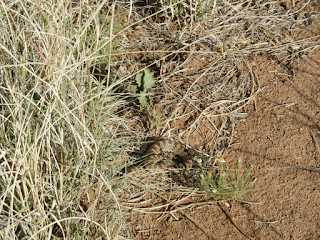 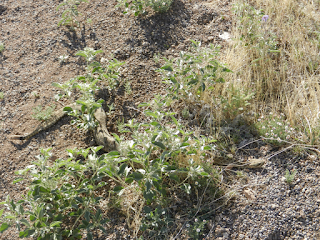 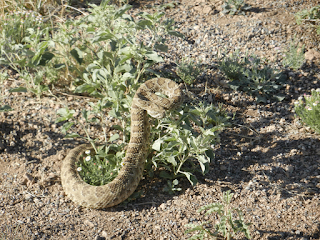 There’s another drawback to spending time in a desert campground in May. The temperature brings out other local fauna that enjoy the warmth. In just over the first week back I came across three rattlers out on the trails while I was doing my dumbbell or sandbag walks. I started carrying my ‘The Extractor’ kit. For the first one, I did not have my camera with me. The little one was along a narrow tangent loop on the west side of the Hydra trail (one of the ones Tim Davis constructed). The next rattler was on the south side of the Hydra trail. This was interesting. For the first shot, it was just stretched out relaxing in the brush. After the shot, my mind shifted back to what I was doing and started walking away to pick up my stuff. Apparently I moved too quickly and annoyed the snake. Out of the corner of my eye I noticed it moving and heard it rattle. I don’t know how high or far I jumped but it might have looked pretty impressive. I also dropped my camera. The third photo shows what is generally referred to as an aggressive pose. The next time I went out on the bike I became aware that I was not enjoying the ride as much as I had been. I kept looking for rattlers. Some portions of the trails have limited visibility. One can’t scan ahead 30, 40’ or more because of tight turns around brush. One could be rolling over a rattler before there was time to react. And slowing down would take just about all the enjoyment out of the ride. Think I’ll be getting my 1800 minutes in other ways while still here. Can’t wait to get back up into bear country where I feel safer. 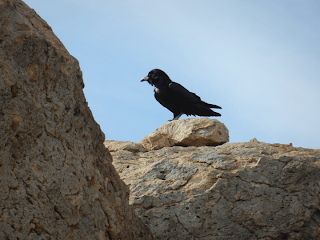 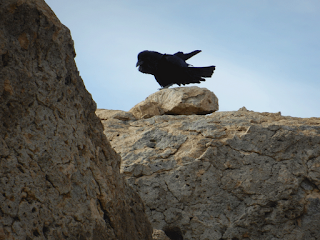 The second photo is the position a raven takes while making one of their unique sounds, head down and neck feathers flared. I need to find a site where the different sounds are interpreted (or at least states someone’s best guess).

I read some of a forum thread about not waiting too long to start a lifestyle of fulltiming or of doing extended trips or you won’t be able to. As if age is the key factor. Most seem to settle for less and less as they get older and think that there is nothing they can do about it. Unreal. 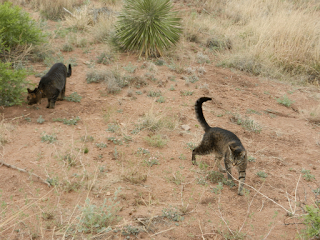 I’m thinking about going back to the Burros for 2 or 3 weeks. I like hitting the CDT for a couple hours in the morning. And there is a somewhat secluded spot down a forest road where I didn’t see any recent sign of use. Should be far enough away from any Memorial Day campers (I hope). Then back to Silver for laundry and to pick up supplies one last time till next year. Heading out of town up rt180 offers plenty of places for disperse camping off the numerous forest roads up to Luna. That stretch will probably take me 3 or 4 weeks. I’ll be checking out forest roads I haven’t been down before. Then probably west to the White Mountains.