more moose, might as well be dead, a dead sony,
mesa’s bear, another challenge, and
children’s books 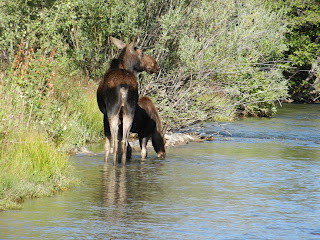 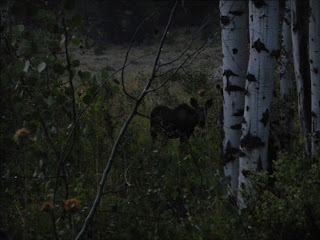 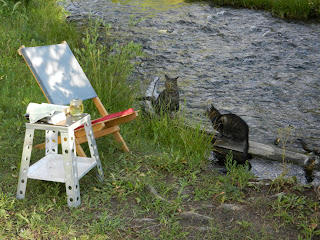 We all know people who might as well be dead (sounds like an opening line in a thriller). These people have so contracted into their limited viewpoints that it is as painful to be around them as it must be for themselves. The flexibility and joy and flow of life are gone. Most anyone can be faced with this grim possibility unless we realize that we need to work with our life. We need to have some form of practice in our day to day existence. We have to be willing to spend time doing something that is not easy. The problem in life is not outside ourselves. Food for thought.
Okay, okay, moving right along… 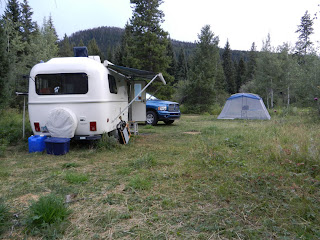 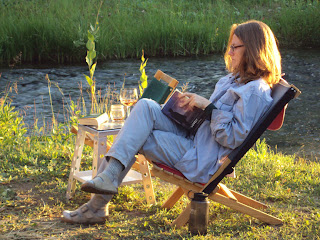 I spent a month disperse camping in Teton Canyon, just east of Alta, WY. Some great trails for running in the mountains. Just down the road a bit was the Mill Creek trail and up at the end of the road were a number of trails. Not bad. Can’t think when I’ve had such a choice of trails, at elevation since getting into this lifestyle. Sure wish I had more opportunities to run in the mountains. Can’t quite bring myself to run much on the flats so winters in the desert are pretty much a write-off.
My friend Linda drove up from SLC for a few days. That was pretty cool. It’s nice to have someone there to do stuff with from time to time. 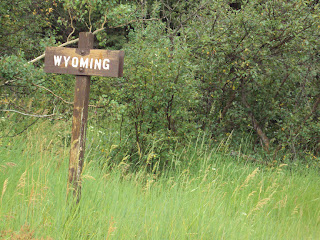 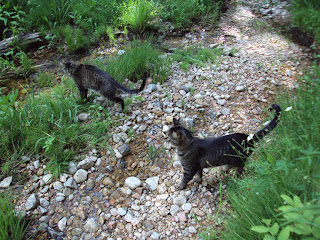 I know there has been major cutbacks but… No, this sign on the Idaho/Wyoming border was along a forest road.
I left the casita in camp and went out in the Dodge looking for other places to disperse camp in the area. After spending two 4-hour days looking for forest roads and driving them, I did not come across any spots that would do it for me. If I was merely into RVing, there were plenty of possibilities, but none for a camper who likes secluded spots that feel good. Actually this whole summer has been like this. Guess I was due for a down year as far as camping goes, but then 4 out of 5 isn’t so bad. Maybe the gods thought I was getting spoiled with the nice disperse spots I’ve been coming across. Oh well, there were plenty of good things about the summer. Don’t think I’ll be coming this far north next summer. I’m actually looking forward to starting the meander south earlier than in past years. DeLorme shows a number of forest roads in the Ashley national forest, south of the Flaming Gorge area in Utah. Might spend a couple weeks checking them out.
One cool thing that happened this summer was I got in touch with a lady I used to teach with down in SLC, probably close to 20 years ago. She lives part time in Idaho, real close to where I was camping. We had a nice visit and dinner. Not bad. 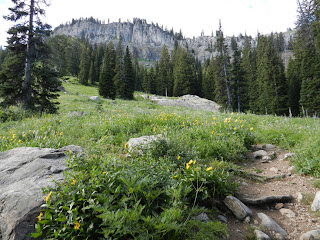 One morning while out running the trails, I took the most awesome photos I’ve ever taken of a moose. Later, when I went to show them in playback mode to Linda, the images just appeared white. When I brought the images up in Elements, the same thing appeared on the screen. My Sony Cybershot had died. Guano. The next day I drove over the pass to Jackson and purchased a Nikon Coolpix at DD Camera Corral (great photography shop). Sure was bummed about missing the shots of the moose. 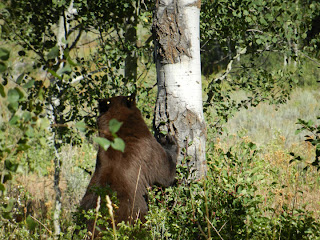 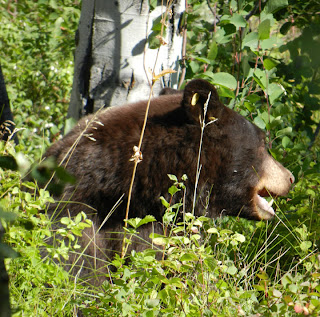 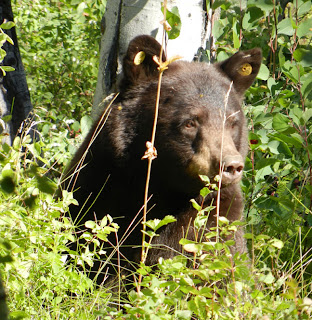 One morning I was reading a book inside the casita and Mesa was lying out in the window cage. Suddenly he sat up, focusing on something, and then he tears out through the cat door. I thought he probably saw a squirrel. Not so. This critter is a bit larger than a squirrel. Don’t know why he wanted to dart outside. But then, I never thought he was overly bright. These shots almost make up for the moose photos I missed. 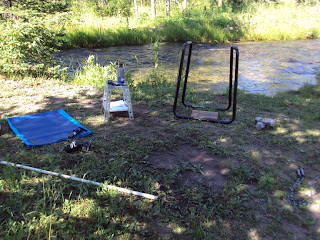 If I had a place like this one beside a creek to give thanks each morning, my resolve might never waver.
August’s sixty minutes sixty years: snagged it again with 1880 minutes. Hope I’m on a roll. I’m even up to 5-exercise tabata circuits (40 cycles for a full 20 minutes). Now THAT’S some major progress. 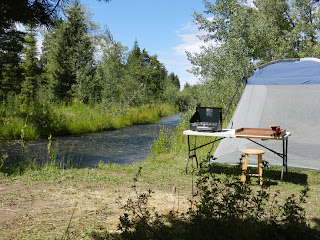 It is our responsibility to be healthy. It is our obligation to take care of ourselves—for one’s self, our families, and society. Doctors can help, but your body will more often than not tell you what you need. One just needs to take the time to listen. Most health tips are common sense. When working full time to pay the bills for all one’s possesses, having a young family under the roof and the lack of time, space and attention, our personal health care often moves to the bottom of the list in terms of priority. It’s unfortunate that with retirement and all the free time, space (being outside), and attention, most still keep their personal health care at the bottom of the priority list. And they are generally the ones grousing about our health care system. Those who are the burdens, bitch the most. Go figure.

Besides the sixty for sixty in September, I’m shootin’ for another physical challenge. I’m calling it the ‘Quad 200’—going for 200 reps daily, focusing on the quads, using various types of squats, lunges, step-ups, and other movements—hoping for 6000 reps by the end of the month. We’ll see.

September humor—Children's Books Not Recommended by the National Library Association.

The Boy Who Died from Eating All His Vegetables
Curious George and the High-Voltage Fence
What Is That Dog Doing to That Other Dog?
Where Would You Like to Be Buried?
Why Your Mom's ‘Flashlight’ Vibrates

The most important product of your life is you—why trash it?

Anonymous said…
You are absolutely right about taking responsibility for one's own health! I'm teaching a chronic illness self-management workshop and most of the advice is very general. The changes come about when participants make their own personal action plans -- and then actually follow through! And being part of that process is turning out to be very cool...
September 26, 2011 at 1:51 PM

MFH said…
I'm not understanding the timeline. Your July 12 entry says you were away for four months doing the BMT, but your posts suggest a continuous flow.

Are there two of you?