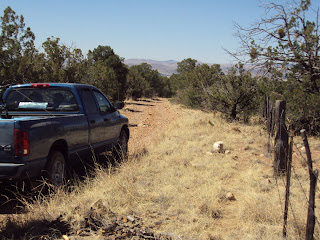 This will probably be the last year that I work my way north through New Mexico. I really don’t like driving through the middle third of the state and it’s not the kind of land that I enjoy camping in. I did manage to finally see Taos this year though. Now that is a town that I could live in. Or rather just outside of. Seems like a nice community and there is ready access to some awesome mountains. If I come back this way in October as I head south, I hope to spend some time there. 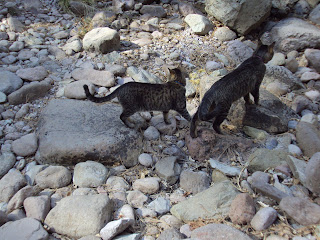 I knew it was a dry winter down here but it didn’t sink in until I stopped at some spots I visited in the past and found dry creek beds. Not good. They also started fire restrictions in the Gila’s in early April. Then elsewhere there is extensive flooding. Unreal.

Early one day I took Carson National Forest road 439 off rt518 and that could have been a big mistake. It was a fairly steep, narrow, rutty road cut into the hillside. About a mile up was a pipe gate with a ‘road closed’ sign on it. Luckily the gate was open. There was no place to turn around. It was early in the day so I decided to turn around in the meadow past the gate and try another forest road. It would have really rotted backing down that hill with the curves, ruts and a steep drop-off on the side. One of those times I wished the casita brakes worked in reverse. Nope, sure would not have enjoyed that.

Didn’t find any new stellar spots to camp this trip. Some okay spots that would no doubt satisfy most campers but I guess I’m getting too picky since I know what can be out there miles down dirt roads. There were five days where I only stopped for one night. Definitely not the norm. Have no idea what M&M were thinking, being put back in the Dodge each morning after they’ve been out and about for a couple hours. Had a 103 mile day, a 141 (pretty much my max. It’s not like I have the RVer’s mindset.), a 43 mile and a 44 mile (real nice), a 57 mile, and a horrendous 291 mile day. I would definitely bag this lifestyle if that were the norm. RVers take days like that in stride and most do quite a bit more. Hell on earth. Wonder what I’ll come across up in Idaho and Montana this summer. 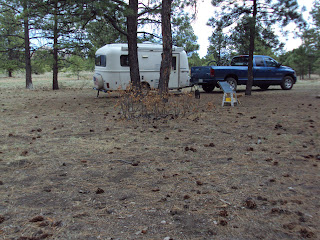 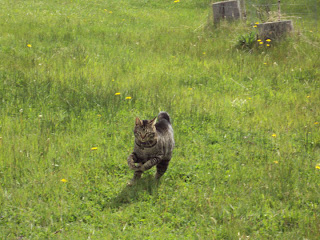 I enjoyed spending time in the Carson forest west of Taos. Probably would be too many people for me during the summers. Dug my longbow and judo-pointed arrows out and went off huntin’ Ponderosa pine cones. Had some good late afternoon walks with M&M. I swear wind through Ponderosa has a unique sound. Could be wrong but I sure seem to recognize it. I love it. Like the sound of a raven’s wing-beat is so recognizable. 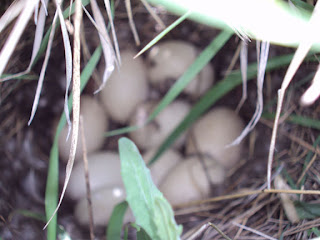 Back in Chama, NM for some house sitting and running in the mountains. Sure enjoyed it here last summer. Looks like I’ll be continuing on north the last week in June. Sure hope I can find a place to squirrel-away in Colorado for the Fourth of July weekend. Stopped in to see Paul at Three Ravens Coffee House in Tierra Amarilla (December 2009 entry) on the way into town. Definitely like that place. M&M flushed a duck on one of our walks and I walked over to look. Tried six times to get a useable focus on her eggs but did not succeed. One day I saw a hummingbird so I went into town for a bag of sugar. One morning the water was froze solid. Birds came over and it was like, ‘What the …’ 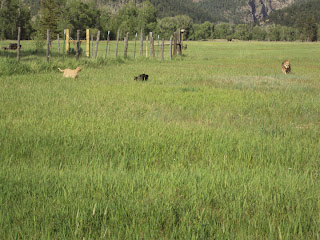 Here’s the contingent from the house in Chama out on one of our walks. 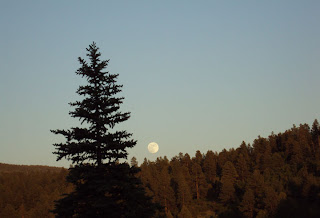 It seems strange that so many people who move out to the country, bring along their suburban mindset—outside night lights, symmetric planting of shrubs and trees, extensive mowed lawns and whatnot. Many move out to the country for a more laidback lifestyle. Yep, that goes along with spending close to two hours a week maintaining a lawn. I guess I have a more bohemian outlook on it—natural ground cover, native plants, xeriscape, just let it be, etc. Or maybe winding paths, the width of a mower, through the tall grass and open mowed ‘islands’ with a bench, a couple chairs, a sculpture, or an arrangement of rocks or stumps—something zen-like, maybe paths for kinhin. I can understand a small section of cut grass if one is actually going to use it for various activities. But for aesthetics?! Guess I don’t have that status quo ring in my nose and I most assuredly would prefer to be doing something else, week after week, month after month, year after year. As some get along in years, they begin to simplify their life by cutting down on possessions and activities that take up their time, things they ‘have to do.’ Seems to make sense.
Simple living encompasses just about all aspects of life—how one cooks, entertains, decorates, vacations, use their time, look at life and on-and-on. Some even use the concept with friends, choosing to have a few close friends rather than many. The ‘many’ tend to be more like ‘acquaintances’. One does not have to scale down to a small dwelling with few possession. There are people into simple living who live in huge lofts in New York City and San Francisco. It’s a mindset that leads to a sense of being free and all that comes with it.

June humor—what a woman finds attractive in a man

A study conducted by Tulane's Department of Psychiatry has revealed that the kind of face a woman finds attractive on a man can differ depending on where she is in her menstrual cycle.

For example: If she is ovulating, she is attracted to men with rugged and masculine features.
However, if she is menstruating, or menopausal, she tends to be more attracted to a man with duct tape over his mouth and a spear lodged in his chest while he is on fire.

No further studies are expected.