Only had 56 days with electric hookups this winter. I wouldn’t have minded a few more days during the cold spell earlier in the month though.

Had a really good ride one day on my Gary Fisher. Had so much energy I felt like finding a phone booth and making like the man. No phone booths though. So I continued on and eventually started to slow down as I got tired and finished up at a much more subdued ‘Clark Kent’ pace. Guano.

Another day I, once again, fell off my bike. I ended up on my back and rolled onto my butt. When I got back to camp and went to change clothes, I patted my back pockets to see if I had anything in them. Can you make a guess here? Yep, there were prickles on my butt pockets. These then transferred to my hands. I hate riding in the desert.
One day I rode a few miles on a double track where apparently all kinds of burrs had settled. When I got back to camp I brushed off all the spiky things I could find. Didn’t help. After a bit I looked at the bike and both tires were flat. Guano. Broke down and started buying Slime tubes for my bike. I was picking up thorns on almost every ride and was going through a lot of tubes. The new tubes seem to be helping but $8 a shot seems a bit much. I pull the thorns out after each ride and the tubes seem to seal up. We’ll see. I HATE riding in the desert.

I was doing my laundry up in Silver City one day and who walks in?—my friend James from Rodeo, who got me into RC electric sailplanes. My first inclination was to shoot him—but lately I’ve been working on restraint. I have not attempted to fly in months. Whenever I do—the inevitable crash costs me money. Looks like James will come up to City of Rocks for a few days to fly or I’ll stop in Rodeo on my way down to Bisbee in March. I’m thinkin’ of leaving the Radian in Bisbee for the year. I could use the saved ‘crash’ money for some bottles of wine.

The Cherokee turned 20 years old and I think he’s telling me that he’s had enough of towing a trailer. It quit on me two times within a month and had to be towed. One time, as luck would have it, there was no cell phone coverage in the area. Well, I just have to get to Bisbee in a couple of weeks. THREE times the Jeep had been up on a flatbed with the casita being towed and each time I forgot to get a photo. Sure hope I don’t get another opportunity.

A real cold spell came through southern NM while I was dry camping. Minus 6 one night and minus 1 the next; then it warmed up to the single digits. Two days it only got up into the teens and with the wind, the chill factor hovered just below zero. One day two windows in the casita retained interior ice throughout the whole day. Unfortunately, I was getting a cold just before the fronts hit—sore throat, congestion, runny nose, headaches, chills, fever, unable to get much sleep—a whole lot of fun in sub zero temps without an electric hookup. It’s probably been close to fifteen years since I’ve been sick. Luckily one day an RVer stopped by to see if I needed anything from town. Rick filled a propane tank for me and picked up some cold meds. A real life saver. Rick and Linda are from Massachusetts and they have 100 acres in Maine. They’re out on the road for 7 months. They’re out on the road for 7 months. Linda showed me a pine needle basket she made from Ponderosa needles. Pretty cool.
Actually kept the Wave 3000 on for two days and nights. NEVER did anything like that before. Went through a tank of propane in less than a week. NEVER went through a tank so quickly. I generally get two weeks out of a tank in winter and nearly a month in summer.
It gets better. One morning Paul and Rick, two of the rangers, stopped by and said the water system was down in the campground. So the next day I’m out there shampooing my hair with the sun shower bag. At least it had warmed up to near freezing. Sure lookin’ forward to summer. 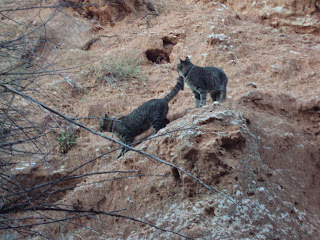 February humor—another oldie and still one of my favorites. How to wash the cat.

Thoroughly clean the toilet. Add the required amount of shampoo to the toilet water, and have both lids lifted. Obtain the cat and soothe him while you carry him towards the bathroom.

In one smooth movement, put the cat in the toilet and close both lids (you may need to stand on the lid so that the cat cannot escape).

CAUTION! Do not get any part of your body too close to the edge, as his paws will be reaching out for anything they can find.

Flush the toilet three or four times. This provides a "power wash and rinse" which I have found to be quite effective.

Have someone open the door to the outside and ensure that there are no people between the toilet and the outside door.

Stand behind the toilet as far as you can, and quickly lift both lids. The now-clean cat will rocket out of the toilet, and run outside where he will dry himself.

If you have a garden and a library, you have everything you need.
Cicero