I had the misfortune of spending a few days in a campground this past summer. I wanted to stay in an area but it was all primarily private land. Guano. After a day I probably knew the names of all the dogs and children in the nearby sites with having met only a few. Unreal.

Since I enjoy isolated camping out on public land so much, it really seems strange to me that I don’t seem to mind campgrounds during the winter months—until this year. I’m having trouble adjusting to the confinement of a campground and the rules. I’ve been feeling boxed in and I have to be more concerned about M&M when we are around campers and RVers. Even my activities are limited. Might need to come up with something else for the winters. These transient communities aren’t really my thing. But then there’s the wimp factor—I appreciate having access to indoor hot showers in the winter (although they are not really all that hot). The sun-shower bag has been working fine for me eight months out of the year. But there have been a few times when I thought I might as well join a polar bear club. Took my last sun shower for the year on November 24.

I stay in the less popular state parks where there are fewer rigs than in the parks along interstates. Some of these parks are almost empty and all the ones I visit are rarely close to being full. Campers don’t tend to be out in the winter; there are a few but it’s generally all RVs. Even with a number of rigs in a park, it feels pretty empty since RVers tend to stay inside their rigs rather than be out hiking around exploring and with the colder temps and winds, people don’t tend to sit outside by a fire in the evening so at least it’s pretty quiet. I enjoy going for walks after dark but the exterior lights on the RVs kind of put a damper on experiencing the full enjoyment of the night sky. I’m already looking forward to getting back in the mountains. I go off for a week of dry camping out on public land once a month and this is somewhat helpful. Well—summer’s coming. 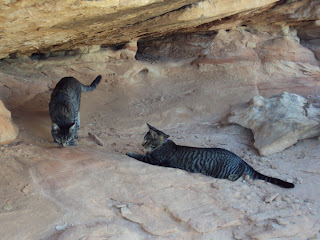 Once I start to head north until sometime in November—forget campgrounds. Granted there are a lot of nice campgrounds out there, particularly some of the primitive ones miles up forest roads. But in campgrounds there are campers—so wildlife will be scarce. There can also be dogs running loose, children and adults walking through your campsite, people calling out to their dogs and children, noise after quiet hours, loud music during the day (even when camping next to a bubbling creek!), generators, chain saws, trash, and I think I’ll just stop here. On the whole, many ‘campers’ do not seem to have a grasp of basic campground etiquette or any appreciation of being out in Nature. Granted, one is outdoors—but not what I consider being out in Nature. When I step outside in the mornings, I don’t want to see other rigs—I want to hear sounds of nature and see wildlife. I want to take in the local flora and splendid views. For me, these are the sights-to-see. I go the mountains to feel a contentment that only Nature can bestow. That’s why I live this lifestyle. One can’t get that in a campground.

December Night Sky—these stars mark the location of a special spiral object. It is so distant that we can’t see anything farther away. The light from it is over 2,200,000 years old. Guess? She is the daughter of a King and Queen who spin around the North Star. Guess? According to Greek myths, Andromeda, daughter of Queen Cassiopeia and King Cepheus, was a very good lookin’ princess and her mother bragged about this a lot. This angered the gods so Andromeda was chained to the rocks and left there for the monsters of the sea. Yep, along comes the hero, Perseus, son of Zeus. In the sky it seems as if Andromeda is being carried to safety by Pegasus.
The farthest point we can see with our own eyes is the Great Spiral Nebula, also know as M31. The beautiful star-island is a galaxy. Follow a line from Polaris through Schedar in Cassiopeia (the bottom star in the right side of the ‘W’). It point to the Great Spiral. It’s not too bright so wait for a dark night. It’s fuzzy not a pinpoint like a star.

To find harmony, one's life has to be in balance.
One needs balance so one can walk in beauty.
In the end, it is all up to me.
(forgot where I came across these lines)

cherie said…
I have enjoyed reading about your travels during the year. We met off the road in a campground in the spring. We traded books and magazines. Gael and I will be doing a repeat of last spring only longer. I'm hoping our trails will cross.We are looking at mid to late May. Hopefully we all will be able to at least meet and share some stories. You have some really good ones. Have a lot more to hike in NM. Keep on hiking, Cherie
December 18, 2010 at 9:20 AM