Since the lost plane fiasco, I downloaded a number of articles on learning to fly electric RC planes as well as J. Carpenter’s eBook ‘Beginner’s Guide to flying RC airplanes’. $250 late but hey… I get to chapter 13 (!) titled, ‘Crashing’ and it starts off, ‘Crashing is all part of the hobby of radio control flying…’. I seem to recall James also alluding to this. Not exactly the best incentive to get one into the hobby. 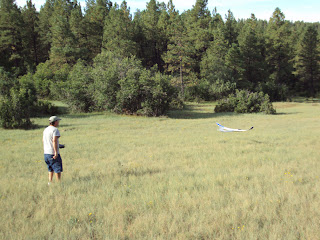 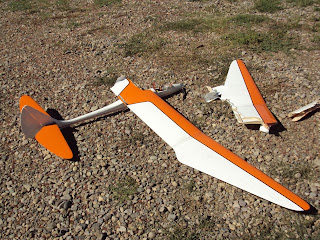 James stopped by for a couple days on his way back to Rodeo. The first shot is him bringing my Radian in for a landing. Like I stated in the last flying entry, he’s an ace. But—he has not had a good summer. I didn’t see the Multiplex Easy Glider Pro he was flying when I first met him. I asked him about it—it got destroyed. I asked him about his Radian—he’s waiting for parts. The wings loosen up over time and he had masking tape wrapped around to ends to snug up the fit. Apparently not enough. On one flight—the wings fell off. He said it was pretty cool how they fluttered down. I then asked about his Multiplex Easy Star. On one flight he noticed smoke. Not good. The ESC (electronic speed control) caught fire. He was able to salvage some parts from the crash, however. He was presently flying a Dynaflite ‘Bird of Time’ with a 108” wingspan. It looked awesome up in the air since it was so big. You’re probably know what’s going to happen. Yep, it crashed. The battery died and all control to the plane was lost.
I’m beginning to see why this hobby is not all that popular. 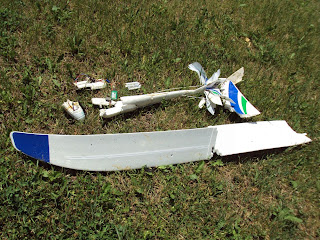 A couple people from further up the valley found my first plane while they were out walking their dog. The sailplane was twice as far away as I had thought. It was nowhere near the grids I was working. The pieces were scattered probably 40’. This is what they looked like all gathered together. Only one wing was salvageable. I had put in a total of 5 hours looking for that sucker. At least I got in three Wait, Wait podcasts and one podcast of From the Top while searching so the time was pleasant. If the Radian didn’t look so cool as it is flying, I really would bag this costly endeavor.

My second Radian was getting trashed from all the crashes. The fuselage was repaired so often that I was no longer able to keep the nose straight. With the propellers pointing a bit to the left only made it all the more difficult to fly the plane. I ordered a new fuselage and transferred the parts. That was an experience.

The more I learn about RC planes on the web, the more daunting the task seems. Since crashing occurs EVERY time I attempt to fly, that’s what I have been researching (I won’t tell you what my running buddy said about that). A prime explanation for a crash is ‘flying beyond one’s current capabilities’. Since I do not have any capabilities when it comes to flying—this might explain it. Another cause might be ‘structural failure of a flying surface’. Nope, everything gets glued back together after each crash. Some really cool things I’m looking forward to are: ‘Radio failure’, ‘a servo linkage breaking’, ‘less than adequate battery levels’, ‘a stall too close to the ground’, and more ‘disorientation’. Disorientation happens when your plane gets too far away from you to see clearly, which direction it's pointing and exactly what it's doing. Yep, been there, done that, have the wreckage photo to prove it. Disorientation also happens if you fly directly over your head and behind you. As you look up and turn, your eye to brain communications can become momentarily ‘distracted’ as you lose all visual reference to everything. You suddenly lose track of what your plane is doing. This is all getting to sound like a joke.

It’s been my experience that the wrong input from me on the toggles at the wrong moment usually means one thing—The Walk of Shame—and upon reaching the impact zone—start the ceremonial and embarrassing collection of wreckage that was, only a few seconds earlier, my RC sailplane. I really need to get past this Crash-and-Burn stage.

At one point I finally realized, that realistically, I cannot possibly be crashing as often as I do. So I came to the only plausible conclusion— someone is camping off in the trees and shooting down my plane. 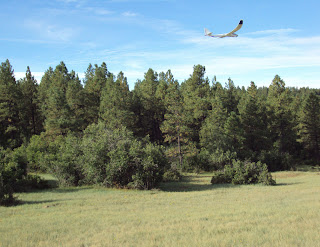 Well the good news is that I’m still only on my second Radian—haven’t lost or totally destroyed it yet. Can actually keep it in the air for a few minutes. But jeez is there a lot to learn.


Heading over to southern Utah for a few weeks. Back to sparse internet access.

September Night Sky—this constellation fits right inside the Milky Way. This is also the home of the ‘Dumbbell Nebula’. Some think it’s a cross. Others believe it’s a bird. Want to guess the constellation?
Cygnus, the Swan, is also known as the Northern Cross. Albireo is at the Swan’s head as it flies south. Albireo is not very bright, but it is a beautiful two-color double star. Easy to see with binoculars since it’s in the Milky Way. Clusters, clouds, and variable stars fill the field. Cygnus is also the location of another candidate for a black hole, Cygnus X-1.

Buy lemonade from any kid who is selling.
Give money to all street musicians.
Robert Fulghum

Unknown said…
I always imagined how technical it could be for me to fly a quadcopter. Well, I proved myself right when I piloted my first drone a few weeks back. Thanks for sharing your experiences. I also found some interesting drone uses here: http://mydronelab.com/blog/drone-uses.html
October 20, 2017 at 8:00 PM