don't sit on your ticket 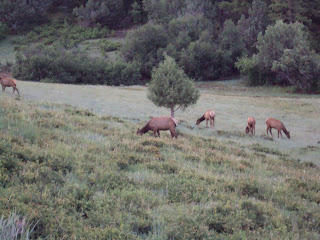 Most mornings as it is getting light I hear the elk calling as they work their way out of the woods into the meadows. After it is light I go out and generally see something like this. Way cool.


Robert Fulghum tells this story of an airport encounter. ‘Out of one person’s moment of comic despair has come perspective for all’. He presents it as a letter.

"There you were, Hong Kong airport, end of the summer of 1984, tensely occupying a chair next to mine. Everything about you said ‘Young American Traveler Going Home.’ You had by then exchanged jeans and T-shirt for sarong and sandals. Sensible short hair had given way to hair long and loose. The backpack beside you bore the scars and dirt of some hard traveling, and it bulged with mysterious souvenirs of seeing the world. Lucky kid, I thought.

“When the tears began to drip from your chin, I imagined some lost love or the sorrow of giving up adventure for college classes. But when you began to sob, you drew me into your sadness. Guess you had been very alone and very brave for some time. A good cry was in order. And weep you did. All over me. A monsoon of grievous angst. My handkerchief and your handkerchief and most of a box of tissues and both your sleeves were needed to dry up the flood before you finally got it out.

“Indeed, you were not quite ready to go home; you wanted to go further on. But you had run out of money and your friends had run out of money, and so here you were having spent two days waiting in the airport standby with little to eat and too much pride to beg. And your plane was about to go. And you had lost your ticket. You cried all over me again. You had been sitting in this one spot for three hours, sinking into the cold sea of despair like some torpedoed freighter. At moments you thought you would sit there until you died.

“After we dried you off, I and a nice older couple from Chicago who were also swept away in the tide of your tears, offered to take you to lunch and to talk to the powers that be at the airlines about some remedy. You stood up to go with us, turned around to pick up your belongings. And SCREAMED. I thought you had been shot. But no…it was your ticket. You found your ticket. You had been sitting on it. For three hours.

“Like a sinner saved from the very jaws of hell, you laughed and cried and hugged us all and were suddenly gone. Off to catch a plane for home and what next. Leaving most of the passenger lounge deliriously limp from being part of your drama.”

That’s quite a story. The lady was sitting on her own ticket. I’ve sure sat on my ‘ticket’ all too often in this life. Sitting on whatever it was that kept me from getting up and on to what comes next. Not so much any more, though.

August Night Sky—The annual Perseid meteor shower occurs this month just after New Moon, so this will be a relatively favorable year to view these meteors, with only a small crescent Moon confined to the evening sky. These meteors are tiny particles from the comet P/109 Swift-Tuttle, "burning up" as they hit our upper atmosphere at a speed of 40 miles per second. The bad news is that the peak of the shower occurs in the evening for us, so the best time for viewing these meteors is in the hour before morning twilight begins on the mornings of August 12 and 13. The best way to view them is to sit in a folding lounge chair facing northeast.

May you live every day of your life.
Jonathan Swift