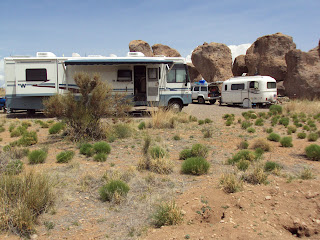 I worked with Donna in Kanab three summers ago. She stopped at C of R on her way back to St. David, AZ from a line-dance jamboree in Artesia, NM. Donna and her 3 felines have been full-timing for a number of years. Her rig is a bit bigger than mine, I don’t know, maybe a 19 or 20 footer. At the site, we had 5 felines cruising around. Way cool. The site was off in the back with no one else around so the little ones didn’t cause any problem and they all were caught up and brought in each night. 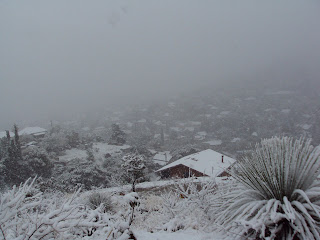 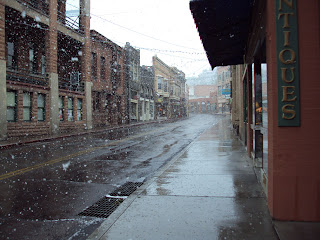 I went back to Bisbee for a week towards the end of April. Hit some restaurants and most mornings climbed my 1200 stairs. Took Lynn’s dog, Chica (pit bull/boxer mix), with me 2 mornings. That was a treat.
When I lived in Bisbee and had friends visit, I provided them with clear blue skies and warm, sunny weather. One morning towards the end of the week, I took these shots to document the weather Lynn was providing for me. Ya think maybe, she was like telling me to leave town? 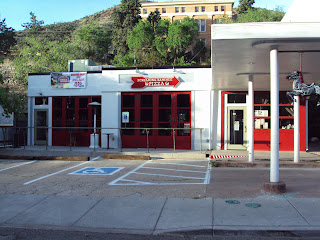 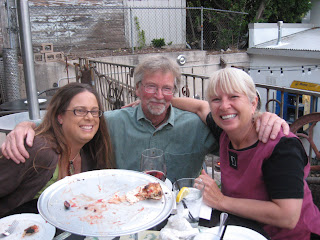 If you are in the area and like good pizza, check out a new restaurant and bar, the ‘Screaming Banshee’ (I call it ‘Redundency’). It is near the Iron Man up Tombstone Canyon. REAL good with fabulous seating out back and stellar bathrooms.

My feet were having some problems if I was out hiking for more than a few hours, especially my toes. I know feet swell as we pound them so I went online and looked into measuring foot size. Our feet also get longer and wider as we get older. I used the method described on this site.

I found out I needed to go up another half size (already had gone up a half size) and go to EE wide. In my 20s I was a size 10 D and now I’m an 11 EE with a half size larger for my hiking boots and running shoes. Good stuff to know if you do hours of walking or hiking.

I finally got to see a DVD of Stephen King’s ‘Desperation’. It was filmed in Bisbee when I was living here and a number of the locals were in the old mine footage. Most of the town footage was filmed on Erie St. in the Lowell section of Bisbee. Erie St. is only one block long but they made the street seem quite a bit longer. I thought that was pretty cool the way they managed that. They also used the buildings on the old Phelps Dodge mine property only a quarter mile away for some scenes and some filming was done down at the bottom of Lavender pit, maybe a half mile farther. Now I have some insight to how low budget films are made. Not bad.

They were holding the 32nd run of the La Vuelta De Bisbee Bicycle Stage Race on the weekend I was in town. On the day of the first time trials, Lynn and I happened to be having dinner at the Roka Café and sitting at the window table. A rider came flying by every 30 seconds. WAY COOL. Jeez were they fast. Makes me want to sell my bike.

Back in NM. Spent a couple days in the Burro Mtns and got in a run on the Continental Divide trail one morning and a good hike on another. Stopped here in the Silver City library for web access. Will take a couple weeks camping/hiking off rt180 and rt12 then maybe angle over towards Taos. Going to be in Chama by the middle of June for a month of house sitting. With daily web access!!!!!!!! 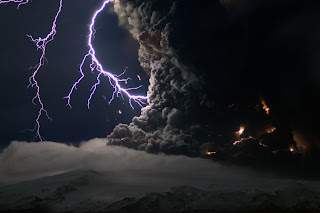 Now if Lynn had brought THIS weather to Bisbee, that REALLY would be making a statement.

May Night Sky—Check out this site for a daily astronomy photo.