back to bisbee II 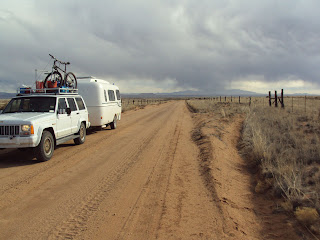 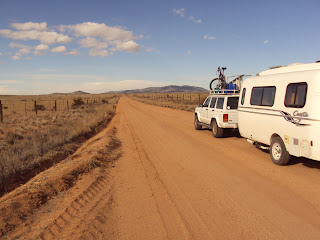 I REALLY did not want to drive the interstate from Deming to Lordsburg so after pulling out of City of Rocks, I headed north on rt180, turned west onto Airport Road, and took Whitewater Road over to rt90. There were some washboard sections initially that shook things up, but once past Whitewater, the road was pretty well graded. One photo is looking back towards City of Rocks and Table Mountain. The other is looking west towards the Big Burro Mtns. Once on rt90 and into the Big Burro Mtns., I made note of where the forest roads branched off since I’ll be back to camp in this area next month. 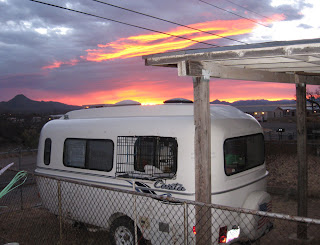 It sure felt good being back in Bisbee. I stayed at Lynn’s again and this time she even provided wi-fi access (we never could find out where it was coming from). I spent hours catching up on web work. What a treat. Lynn took this shot of the casita at dusk. And, of course, we hit some favorite restaurants—Roka Café, Bisbee Breakfast Club, and Turquoise Valley Golf Course Cafe. Life is tough.
I went in Lynn’s house one day while she was at work, to take a shower. I stepped into the tub—and there was no button on the wall—just some knobs coming out of the tiles. What is this?! I messed around with them a bit, water came out, and I could actually adjust the temperature of the water! I’m used to stepping into a shower, pressing a button, and living with whatever temperature water comes out for 10 seconds. This adjusting-water-temperature thing is SO cool. It’s like from a Sci-fi novel. Don’t know if it is just a local thing or not but I can sure see it catching on. Maybe not in New Mexico state parks, however, but one never knows. 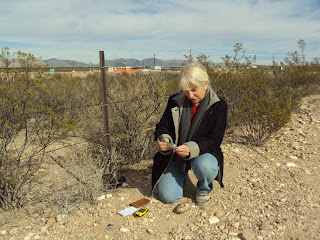 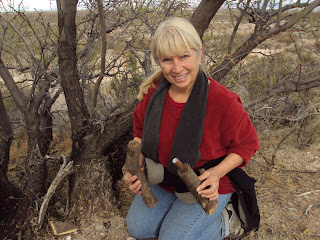 Another given when back in Bisbee was nailing some geocaches. We went after 3 just north of Tombstone. In the background of the first photo, you can see a border patrol checkpoint (it’s a different world down here). The second photo shows how the next cache was hidden. I missed it the first time even though I actually was holding the stick in my hand! Lynn sure got a laugh out of that one. The cachers had cut a stick in half, drilled 2 holes, and inserted a copper tube in one of the holes to hold it all together. Way cool. We then stopped at the Crystal Palace Saloon for a drink (only as historical research) and walked around Tombstone for a bit. 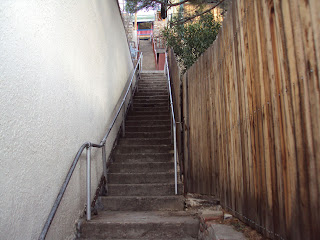 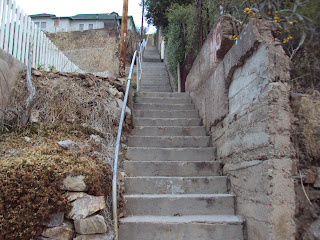 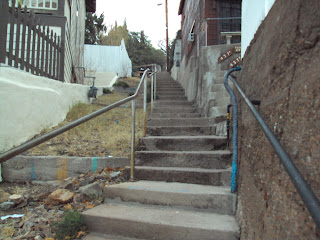 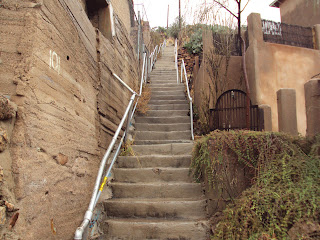 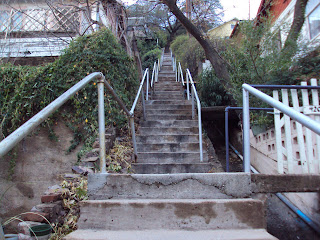 Bisbee is a great place for getting in shape. There are over 3,000 stairs in the historic district. Most mornings I drove over and walked up 1,200 of them. I generally started a little after 6:00 while it was still dark, very few people up and around, and way quiet. Absolutely beautiful. 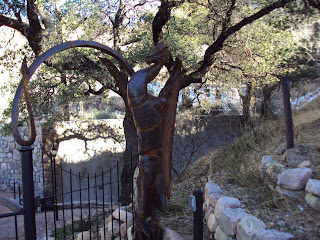 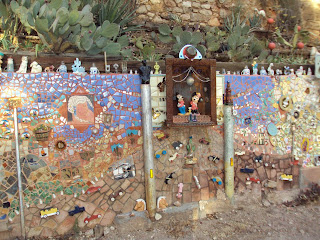 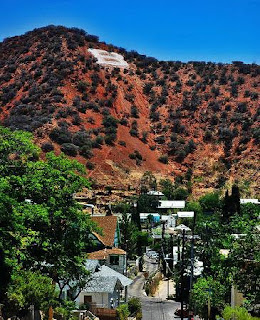 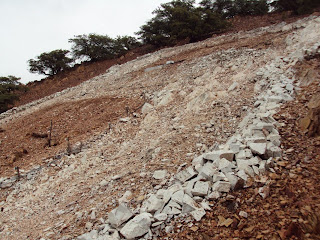 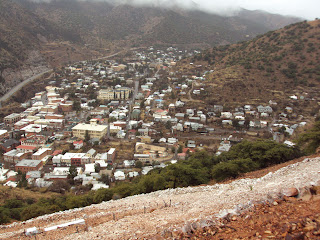 A couple mornings I just did a few hundred stairs and climbed up B hill. You can see the bottom of the trail as it angles up under the B (the stairs are easier). The photos are of another typical Bisbee gate and retaining wall (more on the April 2009 posting), B hill, a close-up of the B, and a view looking down from the top of the B taken on a drizzly day that I just HAD to get out of the casita. 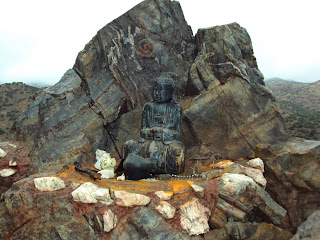 Hiked over to the Buddha shrine from the B one day to see how it was looking. When I first moved to Bisbee, a large, colorful ceramic Hotei (the laughing Buddha) was placed there. One November it disappeared. In the spring I went and purchased a Buddha statue and grouted it in place. The next winter it disappeared.

“Wow, nice Buddha. Where did you get it?”
“I ripped it off the shrine on the hill.”

Ever hear of Karma?!
I was glad to see a new statue had been put there and noticed they used epoxy to fasten it down. It sure seems that some people here are missing the point.

Well, I went mountain biking with David one day. Never have been so out of control on a ride. There is quite an extensive network of dirt roads off Gold Gulch Road, south of Warren (branches off S Arizona St. [Airport Road]). You can park on the south side of Vista Park and bike along a frontage road for most of the way south to Gold Gulch Road. The hills aren’t bad but they are covered with loose rocks. David bikes them all the time and has no problem with them. I, however, always seemed on the verge of crashing—hence the stairs. After riding with Tim and David, I’m thinking about getting a tricycle or a Spooky Tooth bicycle and sticking to paved bike paths.

David did a stellar job with his new gallery—good displays, lighting, and fabulous jewelry and other art. If in town, be sure to check out Jewelry Designs by Owen on Main St.—two blocks up on the left. 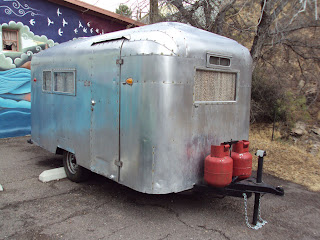 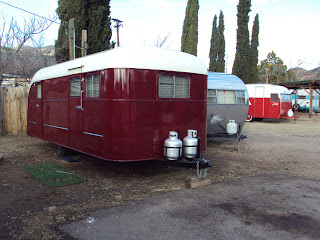 I saw this Carousel trailer parked up Tombstone Canyon Rd in Bisbee. It was made in Tacoma, WA but I could not find any info on the web about it. The maroon and white trailer was over in the Shady Dell vintage RV park. It reminds me of a horse trailer but I really like the lines. There was no tag riveted on the body so I have no idea what it is.

Had two days of feeling real strange—headaches, tired, waking up during the nights with either body sweats or shivering with cold. Lived on aspirin. Thought I was getting the flu but there was never any sinus or throat problem. Strange. On the third morning I went out and did some stairs, weaker and slower but not too bad. Maybe I was just pushing too hard with the mountain biking at City of Rocks and the Bisbee stairs. Sure glad it was not the flu. Turned 60 while here. Doesn’t mean I have to slow down, does it?

A friend I worked with in Kanab, UT 3 summers ago at a workamping job was wintering in St. David, just up the road. Donna came down to Bisbee for a day and we had a good visit. She had a hip replacement and has worked up to doing hours of line dancing each week! Now THAT’S impressive. She full times in a Class A motorhome with 3 felines.

Plan to stop for a couple days of disperse camping in the Peloncillo Mtns, a few miles north of Rodeo, NM before heading back to one of City of Rocks primitive sites.
Back to web access only once every week or two. Guano.

February Night Sky—The zodiac is a long, thin band of sky—a ring of special constellations. It stretches around in a full 360 degree circle, but is only about 17 degrees wide. Zodiac is an old Greek word meaning‘wheel of life’. Each of the 12 constellations covers 30 degrees of the full circle and has a sign in the zodiac. Around the middle of the zodiac runs a line called the ecliptic. It’s the path that the sun seems to take through the sky during the year. The ecliptic changes every day. It marks the seasons. It’s also the only place where eclipses happen—hence the name, the ecliptic. The zodiac is like a great clock in the sky. The sun always rises in one of the 12 zodiac constellations. So do the moon and the other planets. Throughout the history of many lands, the zodiac has been the main way that many folks tell time.

It’s almost as if—on a warm, sunny day
we carry the day in our spirit.