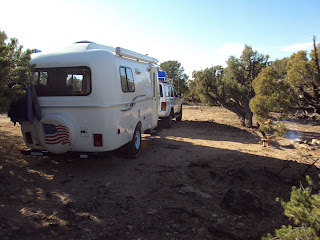 I don’t like to drive from SLC to Moab all in one day so I went off on some sand roads south of Page for the night.

I spent a week at Lisa and Glen’s place in Moab. They provided a great place to park and are fine people. Glen knows EVERYTHING about local places to hike and camp. He pointed out places to camp south out of Moab in my DeLorme atlas. I’m set. We also had dinner one night with Theresa, one of my old principals, who grows the BEST garlic I’ve ever tasted. I truly enjoy these visits.
If in the area, check out the all volunteer community radio station—KZMU 90.1 and 106.7. They broadcast most of what is happening in town. If you don’t like the music, tune back in later. Each programmer plays the music she likes so the genre changes depending on the day and hour.

As luck would have it, the last Farmer’s Market of the season was on the weekend I was here. I snagged a fabulous loaf of blue cornmeal walnut bread, a VERY decadent small chocolate pie, and a tub of cheese by the local cheese-maker. Lisa picked up ten pounds of Alaskan salmon. I learned that salmon caught miles off the coast tastes way better than river salmon. Salmon are starting to die once they reach the rivers and start to turn red. For the best taste, one wants salmon to still have a silver color. Not that I eat fish but I love learning stuff like this.