onyx thwarted, skiers cabin, where am i 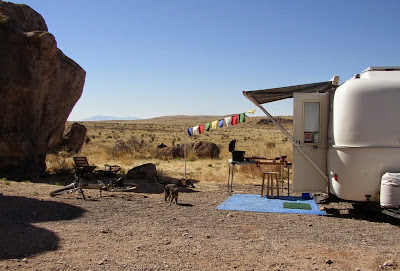 We are SO ready to head out. Ready to get down to the desert to enjoy sites like this one that we had last spring for a while. 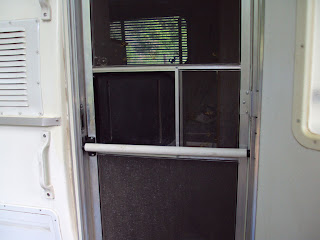 I’ve managed to thwart Onyx. Remember how I occasionally grouse about how he opens the screen door and leaves it open? No more. I cut a length of PVC, inserted two #3 rubber corks in the ends, and wedge it into the doorframe. The first time Onyx went to open the door, he actually did a pull-up. He put both paws up on the bar and pulled down on it. He went up. His feet actually left the step and he pulled his chin up to the bar. Tell me that did not have me roaring with laughter. All is not perfect, however. One evening as it was getting dark, I snagged Meadow, put her inside, and went looking for Onyx. I neglected to wedge in the door bar. Onyx must have been under the camper. When I could not find him, I went back to the casita. Yep, the door was open, Meadow had come back out, and they both were off out of sight. Times like this make me glad I do not always carry a gun.
Even to the extent that I have simplified my life over the last three years, the gods seem to just throw me a curve from time to time. What—like I’m a pawn here? Is my purpose in life to amuse the gods? Well, a sense of humor is important. I guess I can’t grouse if they have one. But can’t they like annoy someone else? Didn’t Arnold say something like that? 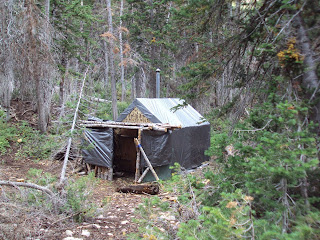 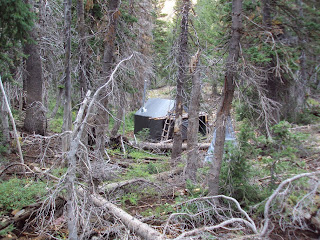 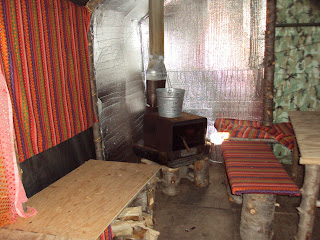 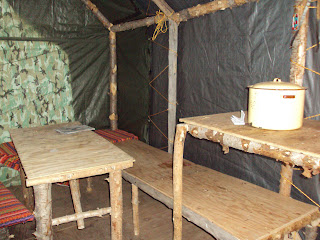 There is an old cabin up in the wilderness area. It was possibly an old hunting cabin but now it’s primarily used by backcountry skiers. A ‘Black Diamond’ sticker on the door kind of gives it away. The cabin is framed out with logs from the area and covered with tarps. The frame is old and there are no active trails to the cabin. It won’t be there much longer. Forest rangers found it while spending two days in the area making note of disperse campsites in the wilderness area. No permanent structures in the wilderness. Oh well. Sure was cool to come across. I was up there again the other morning. It was drizzling and the air had that still, heavy feeling. Colors were sharp and sounds were muted. Sure had me chompin’ to get back to disperse camping.

Sold more of my silverwork this summer than last. That’s always a good thing. I need to keep more men’s medallions in stock. 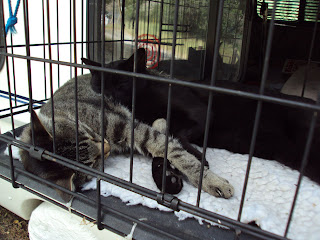 Meadow and Onyx usually spend the middle of the day in their window cage.
Last season here, Meadow and Onyx were ready to move on around mid-September. This summer they were showing signs by early August. They aren’t off roaming as much and spend more time just sitting around. Whenever I have the Cherokee’s doors open, they jump in and take up their driving positions. They’ve become as antsy as me.

The hummingbirds started to head south earlier this summer. Instead of the end of August, they left in the middle of the month. There are still some stragglers and some transients coming through but not all that many. Does this mean it might be an early winter?

A couple times people (can’t bring myself to call them ‘campers’) came up here after stopping at Wal-mart to pick up a tent, sleeping bags, a propane stove, and, for one group, a hatchet (a hatchet?! Come oooon!). I eventually got to their sites (no pay envelope in the post either time) and notice all the empty camp supply boxes. They ask:
‘Where do you sell firewood?’
‘I don’t sell firewood.’
‘Where can we get some?’
‘We’re in a forest. It should not be all that difficult to find wood.’
Like, WHERE am I?!

One evening I went into a campground and noticed a couple in one of the sites. Checked the pay-post—no envelope. What a surprise. Walked over and they were sitting there eating steaks. ‘We just got here.’ I looked at the fire-pit. Wood had burned down to coals and there was a grill over the coals on which they had cooked the steaks. What&#151do I LOOK like an idiot?!
I wonder if they have ever tested the local water.
Thankfully there are some absolutely wonderful campers, hikers, and climbers who come up here who I thoroughly enjoy spending time with. Makes the summer truly memorable (along with all the time out on the trails).

‘Not all those who wander are lost.’
J.R.R. Tolkien in The Fellowship of the Ring

Ron said…
In defense of firewood.
Sounds like me... where's the firewood?
In many western National forests you are not allowed to gather downed wood. Don't ask me why.. but the Kaibab across the strip from me will not allow you to gather firewood from the forest without a permit. I have been told the same applies to the NFs around Los Angeles.
Some people believe that all of the rules apply to all the parks and forests. Not.
In Minnesota someone told me they will not even allow you to bring your own firewood for fear of some beetle infection.