ravens, one life less for onyx, and bikes 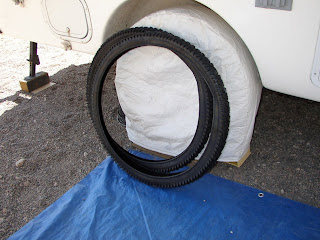 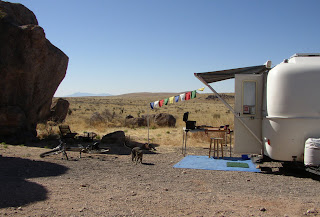 Had a headwind while heading back to New Mexico. Going and coming, go figure. Awful gas mileage—might as well get a class A. Oh well, had another podcast of ‘Wait, Wait, Don’t Tell Me’ to keep me chuckling.

Purchase two new tires for the casita while in Bisbee. With the narrower cross-section and less rolling resistance I should get much better gas mileage.

Yet another stellar spot for working at the bench. But—I don’t know—maybe a little closed-in?

The first hummingbird of the year came by the other day so I mixed up some sugar water and hung up the feeder. Now there are a couple visitors in the morning and late afternoon. 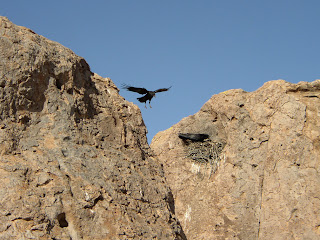 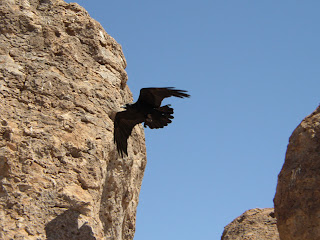 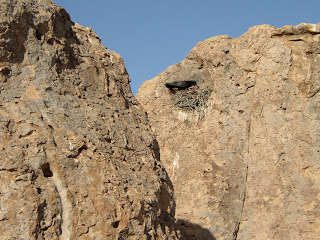 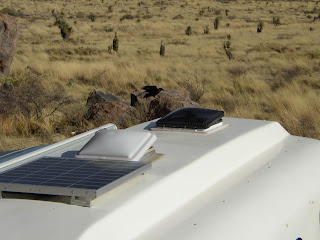 There was a raven nest up in the rocks, not 50’ from the camper at one place we camped. Didn’t see it until I had set up camp. Maintained a quiet, laid-back site while there, trying not to disturb the birds. Judging from their behavior, they were not the least bit concerned. It was a fabulous experience. Prior to this time I had known two different sounds that ravens make. Here I learned of four more—all very distinct. Way cool. The ravens took turns sitting in the nest and sometimes they both just took off for a while and frolicked in the wind together. Took awhile to get anywhere near a decent shot. I swear the ravens waited till I held up my camera before flying away or ducking down in the nest. The eggs hatched before I left and in one shot you can somewhat see the little ones being fed. I still had two seed suet bricks so I kept putting pieces out on a rock behind the camper along with a dish of water.

Well, I almost shot Onyx the other day. The little twit was outside one morning and the cat door was closed so he did his standard trick of stretching up from the doorstep and opening the screen door. This time however, he walked in with a live kangaroo rat in his mouth and when he got inside. Yep, you got it—he let it go. Son of a bi*ch. As luck would have it—no, that can NOT be the correct word—the little long-tail ran through the opening I had cut in a back bench so M/O can go in and out when the locker door is open. Guano. Hey, no problem, ALL I had to do was clear off the table and remove it, take down 30” of books stacked on a shelf under the table, remove the bench cushions, take out the 8 screws holding the bench in place, go outside and turn off the propane, disconnect the gas line to the Wave catalytic heater and remove the heater. Most of this time I was thinking that a shooting would be an absolutely stellar occurrence. Then I grabbed a pair of leather gloves and a towel and pulled out the bench. The rodent was hiding behind the fresh water tank. If he had taken off—I would have needed TWO cartridges. I caught the little guy and after making sure neither Meadow nor Onyx was around I put him out in the field. While putting everything back, I was still thinking of Onyx’s impending death. But since he is no doubt down to his last life or two, I decided to cut him some slack. Maybe next week.

Stopped in Silver City and bought a mountain bike at Gila Hike and Bike on College St in the Historic Downtown area. The people at Gila Hike and Bike are wonderful. If you pass through the area and need outdoor gear, a new bike, or accessories, definitely check out this shop. The Gary Fisher I had picked up at a pawnshop up in Utah after trashing my Specialized was too small but I wanted something to tie me over. I asked in the Gila shop if they knew of anyone I could give the bike to and they suggested it be donated to The Bikeworks. The Bikeworks is a community bicycle workshop that promotes bicycling. They offer hands-on learning, weekly rides, and an earn-a-bike program. So there it went. The new bike is working out really well. It’s the first time I rode on 2.25 tires with the narrow rims of disc brakes. WHAT A DIFFERENCE! The ride is comparatively so smooth I swear I rode the first few miles with a big grin on my face and let out a hoot from time to time. It was SO much fun. I’m talkin’ single-tracks here—rocks, roots, small jumps and drop-offs, switchbacks, and whatnot. Damn—and I’m nearly 60! Never did believe in the status quo rate of aging. I’ve come across too many older people who have slowed down their aging process big time. They all exhibit self-respect, discipline, and knowledge of how the body works. Then there is always the idea of appreciating what one has been given and showing thanks by taking care of it. I know, I know—not AT ALL popular.

Well, back to the Gila forest for a few weeks.