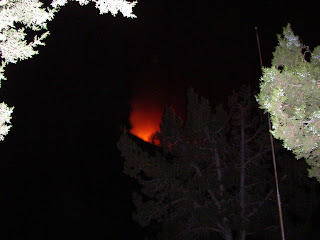 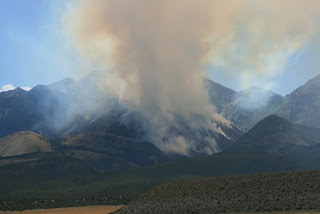 Well August started off with a twist. I got evicted. Lightning started a forest fire in the next canyon to the south. Hot Shot crews, 10 smoke jumpers, eight 20-person crews, a Type 1 helicopter, a Type 2 helicopter, and two Type 3 helicopters were assigned to the fire. Last night it came over the ridge and started burning down into South Willow Canyon. I took the night shot from in front of my camper at 4:00 am when one of the Hot Shot crews stopped by to give me a heads up. Everyone in the canyon was told to leave. When I left, the fire was close to the top two, of six, campgrounds.

Now I hear it is two miles down the canyon. That would take in four campgrounds and possibly the old guard shack if it reached down to the road. We’ll see what’s left when I get back up there next week. I’m presently visiting friends in Salt Lake.

One good point is that the fire crews rescued the lost dog. Rizzlo was out on his own for over a week coping with a night of thunder, lightning, and pouring rain and then, three days later, a forest fire. I had the owner leave a shirt at the campsite during the week and it looks like Rizzlo has been coming back at night and sleeping on it. There was a creek close by and I was leaving cat food out. The fire crew was ecstatic about capturing Rizzlo and returning him to his owners. They had been trying to catch him for a couple days. Rizzlo would follow them around but would not get close. I heard there were a lot of smiles up there.

After a week in SLC, I moved out to another American Land & Leisure campground, Ledgefork #2 in the Uintah Mountains. Nice. It’s a destination campground so there tends to be a different type of people here than what I have to deal with. The two ladies who manage it are doing a stellar job. This is their second summer in this campground and they have it all down pat. I introduced myself, stated that I was presently ‘canyonless’, and one drove me around pointing out the sites she thought I might like. Could not have worked out better. I took a somewhat secluded site so Meadow and Onyx could roam around. In Salt Lake they had to stay on a leash. Took the solar panel out of the box and started to plan how to set it up. One evening I was invited to dinner with the area managers, my two campground managers, and three ladies who work for the forest service. Good group of people who work well together.

Well, one day short of two weeks and they let me back in my canyon. The bottom three campgrounds will be closed for the rest of the season and probably through next spring run-off. I'll post what I think of the changes after I live with them for a week or so.

I was sitting out back a couple days ago and Meadow was lying there, intently looking behind me. When I turned around, there were six little wild turkeys and their mum. Way cool. This morning a doe and her little spotted fawn, came within 40’ of me while I was having coffee. One generally gets to see so much more wildlife when camped out away from others. It’s definitely worth trying from time to time.

Fortunate too is the man who has come to know
the gods of the countryside. Virgil

Jim Reeve said…
Sebastian, I enjoyed reading all your 2008 blogs and some of your earlier ones. As someone already past 60 and a wannabee ultra-lite full-timer still working so a daughter can finish college, I admire your approach to life.
September 10, 2008 at 5:44 PM