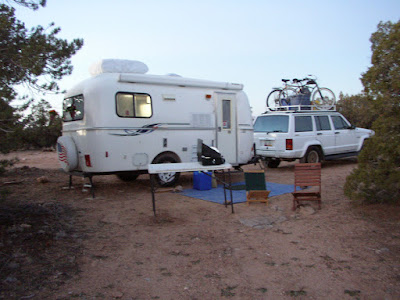 After the seven month workamper job in Kanab, with only two days a week for dry-camping, I was sure ready to hit the road. Took a slow cruise up route 89 towards the Salt Lake area to visit friends there and in Park City for a couple of weeks. Went out to Antelope Island to see the vets wrap up the bison inoculations. The Lake sure was down. I lived in Salt Lake in the early 80's when we were sandbagging downtown streets and they were building pumps to pump water from the lake out into the west desert. Lucked out with the weather. Also lined up a job for next summer as a primitive campground host up in the Wasatch. Maybe even an opportunity to teach a six-week silversmith class up in Park City prior to this. Not bad.

Meandered down route 6 and camped a couple nights up Horse Canyon, south of Page, before heading on to Moab. Moab was fabulous this time of year. I parked at a friend’s house for a few days. The neighbor across the road has horses. Meadow and Onyx have never seen horses. The first day, I had trouble walking Meadow past them even though we were on the other side of the road and the horses were not near the fence. By the third day, Meadow was up on the top fence rail going nose to nose with one of the horses! Took a hike one day to False Kiva in Canyonlands. One night we went to see a selection of films from the Wild & Scenic Environmental Film Festival. Nice. Went out for a couple of meals with other friends, visited, met some new people, and generally had a great time. I hate this life.

Continued down route 191. Stayed at Sand Island, just outside of Bluff, right on the San Juan River. Being by a river was another first for my two felines. They were sitting down on the bank when a river dory rowed by with some people. The boaters got a chuckle at their audience.

The next couple of nights we stayed at South Fork campground, a bit west of Eagar on route 260. Nice. There is a beautiful hiking trail there along a creek. Some hikers were around during the days but no other campers at night.

191 south from there was absolutely stellar. The last time I was on it, I was flying along on a sports tourer so did not chance much time taking in the scenery. A lot of curves through the forest. No shoulder in some spots and steep drop-offs. Brakes sure get a work out. There are many campgrounds and hiking trails up in the White Mountains. One spot had a view of the road as it drops and curves, similar to what one sees in the Alps. Way cool. Spent a few days along this stretch to Morenci.

When I got down to Cochise county, I went along Turkey Creek road into the Chiricahua mountains for a night. I knew I was back close to the border because there was a familiar sign. I attached a picture. Sure do not feel safe boondocking down here.

Now I'm back in Naco, just a half mile from the fence. Even so, I was sitting outside the other morning having coffee and five UDAs jogged past, down on the old railroad bed. Considering there are camera towers all along this stretch, they were probably caught soon afterwards.

I've always heard that cats don't like change but Meadow and Onyx seem to be doing fine with this lifestyle. They sleep in the Jeep while we are on the road and when I start to set up camp in a new place, they go off exploring. They are at the door to get in shortly after dark, are out again in the morning just as it is getting light, and back in by midmorning for their midday snooze. Not bad.

Over a month without hookups so far. No big thing and its been interesting. Learning more about conserving water and propane and different ways to stay warm.

Thinking about staying here a couple more weeks and then maybe spend a couple months meandering east and south to Florida and back on the secondary roads. Two hundred miles a day max.

Been using Skype and it has been working well. Unlimited long distance calls for only $30 a year.

Anne LaBastille wrote in “Woodswoman”, “The world around me seems to be so complex and materialistic. It's my small rebellion to keep myself in pioneer-like fitness, to promote creativity, and to maintain a sense of adventure in my life.”