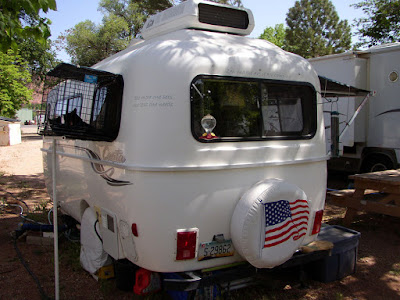 Well, I've been in Kanab for two months now. Not bad. The workamper job is going well. It's definitely helping me to get back in shape and it's great to talk with so many European guests. The lodge gets a few tour busses in each week and sometimes all 88 rooms are filled. All the signed photographs around the place blew me away. Just about all of the film stars from the '30's to '70's have stayed at the Parry Lodge.

I get a daily email from workamper.com listing job openings. This was one:
Arizona: Workamper needed for 12 hours weekly light yard maintenance in exchange for full hook-up RV site, at clothing optional property in Tonopah, AZ. Included: telephone, Satellite TV, laundry, electricity, water, sewer & trash. Call: 623-810-0594.
Sounds like they might use more sun screen than most. 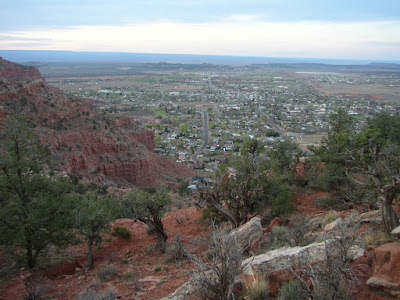 This photo is of looking down onto Kanab from the top of the mesa with the 9,000’ Kaibab plateau in the background.

Found some great geocaches in the area. One was up on the mesa above town and another was eighteen miles east of town and then a few miles along sand roads to Eagle Sink, the largest sinkhole I've ever come across. This sinkhole drops into the ground about 100 feet and is the size of a football field. Another cache has me stumped. Been within a hundred feet of it twice. There's just 75' of river in the way. Someone told me there is a dam downstream that I can walk across. I'll nail the sucker next time.

The site I'm in at the small RV park is right next to the tenting area. Couldn't be better. There's grass in my ‘backyard’ and I can relate much better to this type of camper. The other day I was talking with a bicyclist who was heading down to the North Rim. Tanja is German, in her early thirties, and has been on a solo bicycling trip since 2005. Last year was spent in South America. She keeps a travel blog going (www.getjealous.com/tanja08209). Next it's across Nevada, up the California coast, and on to Seattle, British Columbia, and Alaska.

Another lady was staying in the tenting area for a while and volunteering up at Best Friends. CC has been living full time with her dog in a class B converted van for the last two years. Pretty spry for 62. She also dry-camps quite a bit in her travels.

If you enjoyed ‘Forest Gump’, read ‘Gump and Company’. It's a hoot. How can one person get into so many fixes? The cast of characters alone will have chuckling.

I screwed two plant hangers into the back window frame and hung up a hummingbird and a chickadee feeder. Can you guess where Lapis and Onyx like to hang out when they are inside? Looking through the glass, they are like one foot away from the birds—bodies quivering and tails lashing. They need all the entertainment that they can get this summer. I don’t allow them to go outside while in the park. I also got a cage and have it hanging out a window so at least they can get out in the breeze.

Actually played tourist one day. Linda Lee, a friend from Florida, visited and we went down to the Kaibab plateau for a week and spent a day at the north rim. We walked around the campground they have in the Park while we were there and had some entertaining conversations with some of the campers. Nice time. 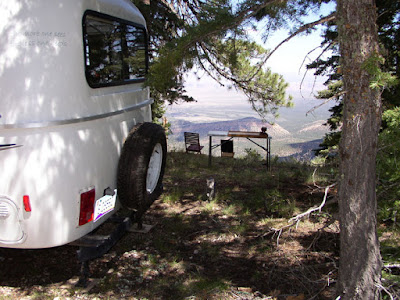 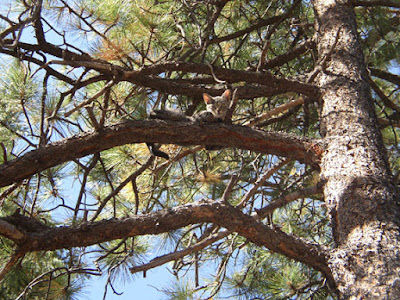 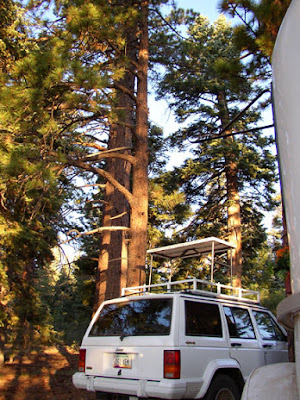 Half way through the summer, I was able to switch my two weekend days off to weekdays. From that point on, I headed up to the Kaibab plateau for a double-overnight each week. Some absolutely stellar disperse sites along the east rim of the Grand Canyon. One morning, two dogs came into camp and Meadow ran up a tree. She did not know how to climb down and I don’t like heights. To make it worse, it was a Ponderosa pine, so there were no branches low to the ground. You can see from the photo that I had to back the Cherokee up against the tree, put the table on the roof rack, and climb on top of it to reach the first branch. Not fun. Ah, the joys of owning a pet.


Go confidently in the direction of your dreams! Live the life you’ve imagined. As you simplify your life, the laws of the universe will be simpler.
Henry David Thoreau